Seattle police have retaken the East Precinct stationhouse after clearing out the protest area known as the Capitol Hill Organized Protest, or CHOP, making more than a dozen arrests after Mayor Jenny Durkan declared the gathering an unlawful assembly following two fatal shootings.

A 29-year-old man was in possession of a large metal pipe and kitchen knife when he was arrested, police said.

The East Precinct stationhouse, which police abandoned last month following standoffs and clashes with demonstrators, was cleared of protesters, Police Chief Carmen Best told reporters from inside CHOP. Best said police were not moving into the building yet.

“Our job is to support peaceful demonstration but what has happened on these streets over the last few weeks is lawless and it’s brutal and bottom line it is simply unacceptable,” Best told reporters.

City workers were dismantling wooden and concrete barriers while police remained on the scene. Best said police and other city organizations will clean the area and the precinct before beginning operations as soon as reasonably possible.

As officers in riot gear performed the predawn sweep to clear holdouts from the streets, police said a woman apparently went into labor on the east side of Cal Anderson Park inside the CHOP. Seattle Fire said it responded to the scene and the woman did not need medical treatment. 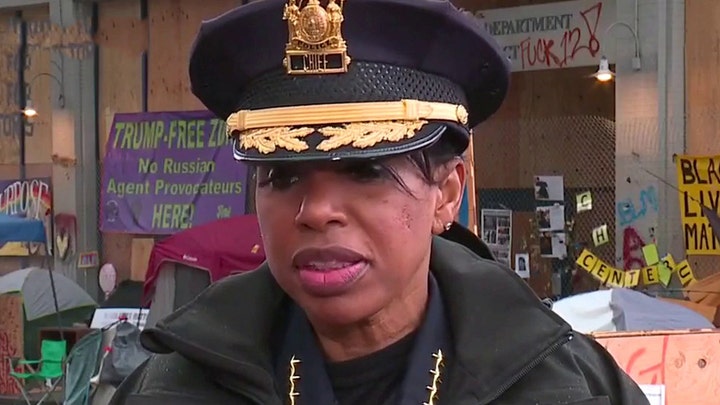 Durkan’s executive order comes after a series of late-night shootings in the area killed two teenagers and seriously wounded three other people. Police said other violent crimes have been documented in the area since demonstrators took over several blocks in the Capitol Hill neighborhood last month.

“Officers enforcing today's order are wearing a higher-level of protective gear,” police said. “Police are utilizing this equipment because individuals associated w/the CHOP are known to be armed and dangerous/may be associated with shootings, homicides, robberies, assaults & other violent crimes.”

Best said that while she supports peaceful demonstrations, “enough is enough.”

Best said that it was the job of police officers to protect and serve the community, adding that the clearing of the protest would not mark an end to the department’s engagement with protesters.

“We must continue our efforts to build trust and redefine our roles as guardians in our city,” Best said.

A protester stands with her hand up in front of a road blocked by Seattle police in the Capitol Hill Organized Protest zone early Wednesday. Police in Seattle have torn down demonstrators' tents in the city's so-called occupied protest zone after the mayor ordered it cleared. (AP Photo/Aron Ranen)

Demonstrators have occupied several blocks around a park and the Seattle Police Department’s East Precinct for about two weeks. Police abandoned the building following standoffs and clashes with protesters, who demanded racial justice and an end to police brutality in the wake of George Floyd’s death in Minneapolis in May while in police custody.

Protesters have said they should not be blamed for the violence in the area.

Seattle Department of Transportation workers remove barricades at the intersection of 10th Ave. and Pine St. on Tuesday at the CHOP zone in Seattle. Protesters quickly moved couches, trash cans and other materials in to replace the cleared barricades. (AP Photo/Ted S. Warren)

There have been increasing calls by critics, including President Trump, to remove protesters from the CHOP zone following the fatal shootings.

The action comes a day after Seattle Department of Transportation crews used heavy machinery to remove concrete barriers marking the entrance to the protest area.