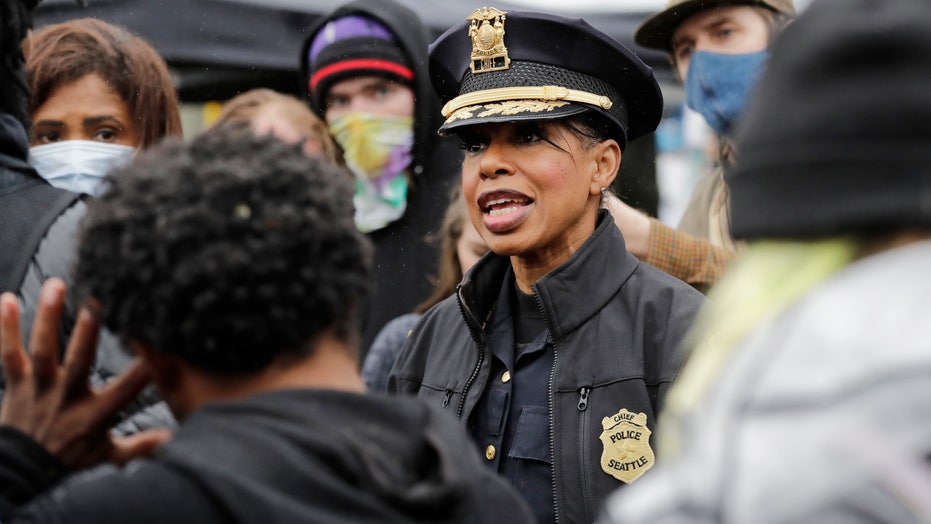 Seattle Police Chief Carmen Best on Sunday announced she had an "epiphany" that "policing will never be the same" following national outcry over the death of George Floyd, and as her department remains locked out of the East Precinct.

Best appeared on CBS's "Face the Nation" Sunday morning to discuss the recently renamed Capitol Hill Organized Protest (CHOP) zone, where she talked about how the future of policing in the city will forever change in response to both local and national demonstrations.

She came to the realization after attending a peaceful March of Silence protest alongside tens of thousands, which she declared in the interview was "a pivotal moment in history."

Seattle Police Chief Carmen Best talks with activists near a plywood-covered and closed Seattle police precinct Tuesday, June 9, 2020, in Seattle, following protests over the death of George Floyd, a black man who was in police custody in Minneapolis. (AP Photo/Elaine Thompson)

"I was looking at the 60,000 people that were there, signs saying, you know, defund the police, stop police brutality, you know, no qualified immunity. And there were thousands of people carrying those particular signs," Best said.

"And I just realized it was a moment, an epiphany, that this is a pivotal moment in history. We are going to move in a different direction and policing will never be the same as it was before."

The police chief expressed desire in returning to the East Precinct after previously denying responsibility in the decision to leave. She did, however, note that it was unclear when the occupation would end.

Best said that while standing and listening during the march, she understood a "change in policing," was needed, adding that "We have to."

“We need to re-imagine and re-figure out how we’re going to move forward as a country and as an organization to make things better for everybody,” she said during the interview with "Face the Nation."

Best said that a challenge was identifying the specific demands of the community and determining a leader to negotiate with. She added that doing so will give direction on "how we might move forward."

Seattle Fire Department Chief Harold Scoggins led talks on Sunday involving representatives of protesters, as well as property and small business owners to figure out how to reopen the area for traffic and local business, according to the Seattle Times.