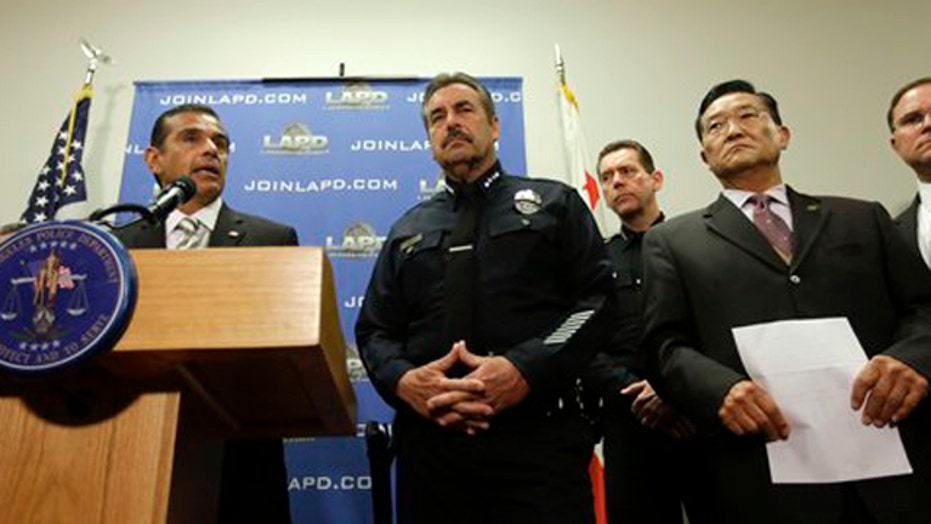 The hunt for an ex-LAPD officer facing murder charges has expanded from California to Mexico after investigators say evidence suggests the suspect, Christopher Jordan Dorner, may have fled the country.

The beefed-up security at the border has created unusually heavy traffic backups as agents are more closely inspecting each car. State police in Mexico's Baja California were given photographs of Dorner, 33, and instructed to consider him armed and extremely dangerous.

Investigators say Dorner attempted to steal a boat in San Diego and drive it to Mexico. Dorner's wallet, including his identification cards, was also found at the San Ysidro Point of Entry near the U.S.-Mexico border, the Los Angeles Times reported.

A hotel in Tijuana, Mexico, was raided Monday by investigators after there were reports of a sighting, but there was no evidence of the suspect on the property, 10News.com. reported.

Federal documents obtained by the Los Angeles Times indicate how authorities developed "probable cause" that Dorner was possibly trying to reach Mexico and provide new details on his actions since he allegedly killed three people, including a police officer, in a Feb. 3 shooting spree that began in Irvine.

Dorner may have been aided by an associate identified as "JY" in the criminal complaint filed in U.S. District Court in Los Angeles last week after the former police officer evaded authorities.

Federal authorities told The Times late Monday that the court papers reflected their thinking at the time, but they stressed that Dorner could be anywhere.

Also on Monday, Zellerbach filed charges — which could result in the death penalty — against Dorner for the murder of Riverside Police Officer Michael Crain and the attempted murder of three other officers. Zellerbach said he believes Dorner hasn’t finished carrying out his vendetta.

"Just read his manifesto and look at his actions," Zellerbach said. "He's trying to send a message, and it would be my belief that his message is not completed yet."

The manhunt for Dorner began last Wednesday when he was identified as the suspect in the Orange County murders of a former Los Angeles police captain's daughter and her fiance the previous weekend. Hours after police announced they were looking for him, Dorner fired at two LAPD officers then ambushed the Riverside officers.

"By both his words and conduct, he has made very clear to us that every law enforcement officer in Southern California is in danger of being shot and killed," Zellerbach said at a news conference that was guarded by four officers armed with rifles.

Police say Dorner wrote a lengthy manifesto that was posted to Facebook after the double murder. He vowed deadly revenge on those in the LAPD responsible for his firing years earlier, and their families. Police now are providing protection for some 50 families believed to be targets.

The search for Dorner had previously been focused in the mountains near Big Bear Lake about 80 miles east of Los Angeles after his burned-out truck was found there. Authorities are searching more than 30 square miles day and night in the ski resort area and checking on roughly 600 cabins.

Police and city officials believe a $1.2 million reward, raised from public and private sources, will encourage citizens to stay vigilant. More than 700 tips had come in since the reward was announced.

"Now it's like the game show 'Who Wants to be a Millionaire,'" said Anthony Burke, supervisory inspector for the U.S. Marshals regional fugitive task force. "Instead of one contestant, we've got 100,000, and there's only one question you have to answer. All they have to answer is where he's at, and we can take it from there."

Dorner was fired from the LAPD five years ago, when a department board determined that he falsely claimed another officer had kicked a suspect. Randal Quan represented him during the proceeding.

Quan's daughter, Monica, and her fiance, Keith Lawrence, were found shot dead Feb. 3 in a car in the parking structure of their Irvine condominium. Last Wednesday, after discovery of the manifesto, Irvine police announced they were searching for Dorner.

Early Thursday in the Riverside County city of Corona, police say Dorner shot at two LAPD officers who had been dispatched to protect a possible target of Dorner's. One officer's head was grazed by a bullet; the other was unharmed.

Minutes later, authorities said Dorner used a rifle to ambush two Riverside officers, killing one and seriously wounding another. The murdered officer was identified as Michael Crain, 34. The other officer's identity was not released to protect his family.