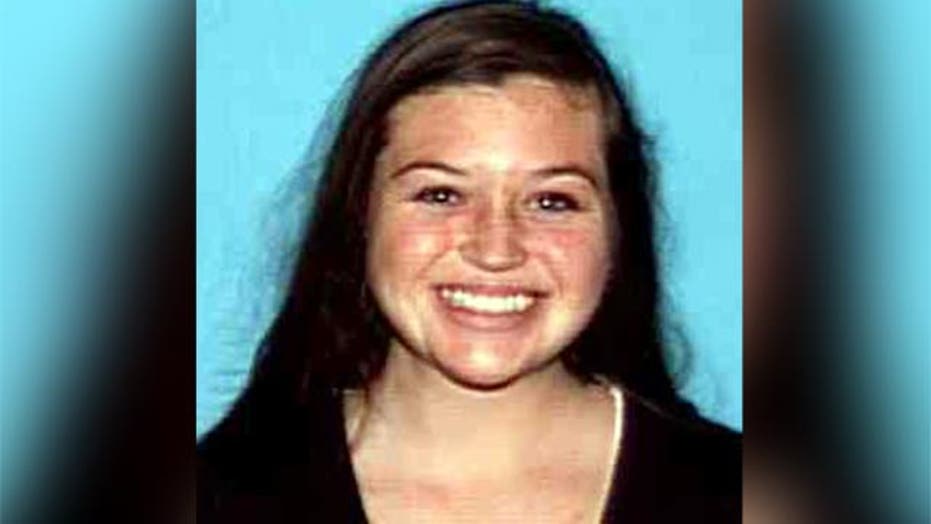 Over the next 90 agonizing minutes, the cries for help — and first faint, and then louder — led the search and rescue crew across a canyon, into a drainage and up several waterfalls to a near-vertical slope where lost hiker Kyndall Jack was clinging to rocky outcropping no bigger than a yoga mat.

The 18-year-old, who had been missing in Southern California's Cleveland National Forest since Sunday, had no shoes, was having trouble breathing and was severely disoriented from dehydration when she was found Thursday. The first thing she asked was what year it was, said Los Angeles County Reserve Deputy Fred Wenzel, who reached her first. Then, she asked for her mother.

"She was filthy from head to toe, her lips were black with dirt, her eyes were barely open and she had on no shoes," said sheriff's Deputy Jim Moss, a paramedic who was dropped to her by helicopter and airlifted her to safety in a harness. "She was just kind of clinging to the ledge on the cliff side, going in and out of consciousness."

Her rescuers were afraid to give her water, despite her extreme dehydration, because she had so much dirt in her mouth she could choke, Wenzel said.

"She was limp and almost lifeless. I was just holding her as the crew chief brought us up and just holding onto her, bringing her in," Moss said of the airlift.

"She wouldn't have made it much longer. She's really lucky."

Jack's dramatic rescue brings a happy end to a saga that gripped Southern California since Easter, when Jack and her friend, 19-year-old Nicolas Cendoya, called 911 to report that they were lost and out of water after wandering off the trail during what they expected would be an easy day hike on the Holy Jim Trail.

The popular trail is in the Cleveland National Forest, where the dangers of 720 miles of rugged mountain wilderness run smack up against the planned communities and shopping malls of suburban southeast Orange County. Jack and Cendoya, who was rescued late Wednesday after being spotted by hikers, parked their car off a dirt road just a few miles from an upscale neighborhood where on Thursday children bounced on trampolines and customers sipped lattes at a Starbucks in an outdoor strip mall.

The two got separated sometime Sunday night and were both found less than a mile from their car and "very, very close" to one another, although they did not know it, said Lt. Jason Park, an Orange County sheriff's spokesman.

"I have no doubt that they came out here with the best of intentions ... but this is a complicated environment and before you know it, you're lost," he said, adding that having civilization so close can lull some hikers into a false sense of security. "It's just as dangerous today out here as it was on Sunday afternoon."

Despite their joy at finding both hikers alive, rescuers anxiously awaited word on the condition of a reserve deputy who suffered a head injury when he fell 60 feet down the canyon. He was also flown to a hospital where he was in serious condition but expected to survive, said Park.

Many details of the pair's ordeal remained a mystery and officials hoped to question them more closely once they were rested and more stable.

It's unclear, for example, why Jack and Cendoya went off the well-marked trail and how much water they had with them. It's also unclear exactly when and how they got separated.

Before his cellphone's battery died, Cendoya was able to make a 911 call — and already the pair seemed in trouble.

"He was panting and said, 'We're out of water.' You could hear Kyndall in the background," said Orange County fire Capt. Jon Muir. "He said, 'I think we're about a mile or two from the car,' and he was right about the distance but in totally the wrong direction."

Cendoya was found Wednesday night in shorts and a shirt but missing his shoes and told doctors he'd become separated from Jack sometime Sunday night. He was flown to Mission Hospital in Mission Viejo, where doctors said he was being treated for severe dehydration, scratches and bruises. He was expected to remain for several days.

Park said Cendoya was "extremely confused and disoriented," when he was found just 500 feet from a heavily traveled dirt road, giving an added urgency to the effort to find his friend.

Jack was found in similar condition, dressed in a pair of dirty athletic shorts, a hoodie and socks, having also lost her shoes. She had low blood pressure, trouble breathing, pain in her legs and right hand and was fading in and out of consciousness when rescuers reached her, Moss said. It was unclear how she wound up on the precarious ledge and she was too ill to tell her rescuers, they said.

She had no memory of going hiking or of being with Cendoya, they said.

Despite that, she suffered no major internal injuries and was listed in good condition at the University of California, Irvine, Medical Center, said hospital spokesman John Murray.

Like Cendoya, she was being treated for dehydration and was expected to be hospitalized for several days.

At Mission Hospital, Dr. Michael Ritter told reporters Cendoya said he survived by taking shelter at night in heavy brush and passing his days by praying.

"He's got a lot of faith in the Lord, which I think will help him to work his way through this," Ritter said shortly before Jack was located.

Cendoya says on his Facebook page that he's a 2011 graduate of Orange County's Costa Mesa High School and a student at Orange Coast College. A number of photos show the athletic-looking young man working out and lifting weights.

The area where the two got lost is in a section of forest in the Santa Ana Mountains that lies along the border of Orange and Riverside counties southeast of Los Angeles. The trail ranges in elevation from about 2,000 feet to about 4,000 feet.