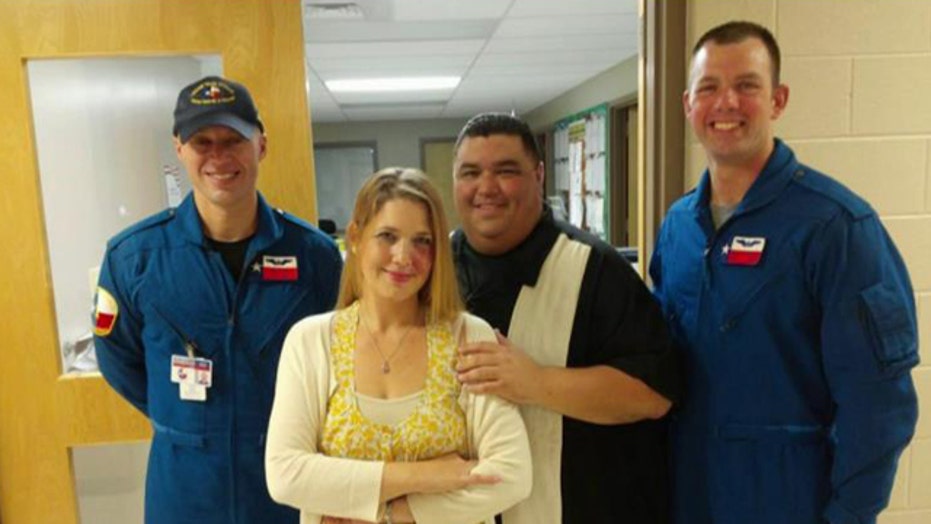 Family describes being scooped from roof by Coast Guard

Scores of people trapped in vehicles had to be rescued early Friday in North Texas as thunderstorms dumped as much as 7 inches of rain, causing flash flooding around the area.

Dallas Fire Rescue said crews worked overnight to respond to about 260 calls that included vehicles trapped in high waters and accidents related to the weather.

The National Weather Service said an average of 3 to 5 inches of rain fell across the area after the thunderstorms stalled over the city. Garland got from 6 to 7 inches of rain.

The Fox Dallas affiliate said conditions were so bad in Johnson County that officials encouraged people to just stay home, saying it was not safe to drive in the rural areas of the county. Nearly 20 people were rescued in that county.

A police officer in Sachse had to be rescued by a National Guard helicopter after get stuck trying to assist a stranded motorist, the station said.

On Thursday, recovery workers digging through debris left by floods in Texas found more bodies as emergency officials kept a close eye on three rivers swollen by heavy storms over the course of last weekend.

The confirmed death toll rose to at least 24, with 20 in Texas alone, after bodies were recovered in Hays and Blanco counties. At least 14 others were missing. Another 14 people were killed in Ciudad Acuna, Mexico, Monday after a tornado struck the town located near the U.S. border.

Flooding remains the main concern for local officials, particularly the Colorado River in Wharton and the Brazos and San Jacinto Rivers near Houston as the floodwaters from North and Central Texas move downstream toward the Gulf of Mexico.

The flood threat appeared to have eased along the Brazos River in North Texas, as the river level at Horseshoe Bend had fallen below the 21-foot flood stage to 20.9 feet Thursday night after the Brazos River Authority closed the floodgates on the Possum Kingdom dam upstream, Parker County Emergency Management spokesman Joel Kertok said. The river crested at 23.6 feet about noon Thursday, almost 3 feet above flood stage, and Kertok said floodwaters lapped at the foundations of 11 homes but rose no further before beginning to recede.

But the worst is yet to come downstream on the Brazos. At Richmond, near Houston, where flood stage is 48 feet, the National Weather Service expected the river to top flood stage Friday morning and rise to 50 feet by late Friday night or Saturday. That would cause major flooding in Simonton, upstream from Richmond, and Thompsons downstream. Fort Bend County Sheriff Troy Nehls says residents of some parts of Simonton have been asked to leave.

The Colorado River at Wharton, where voluntary evacuations took place in the city's low-lying west side, was at 39.5 feet Thursday night, a half-foot over flood stage. Forecasters say it could crest at 44 to 45 feet Saturday morning, causing major flooding.

The West Fork of the San Jacinto River was at 32 feet Thursday night, 8 feet above flood stage and was expected to remain in major flood for several days.

This week's record rainfall in Texas eased the state's drought and swelled rivers and lakes to the point that they may not return to normal levels until July, scientists said Thursday.

Just weeks ago, much of the state was parched with varying levels of drought. But the same drenching rainfall that paralyzed parts of Houston and swept away a vacation home with eight people inside also offered relief from a long dry spell.

Many cities were still in danger of flooding as heavy rain from earlier in the week poured downstream, pushing rivers over their banks.

"There's so much water in Texas and Oklahoma that it's going to take quite a while for those rivers to recede," said Mark Wiley, a National Weather Service meteorologist in Fort Worth, Texas.