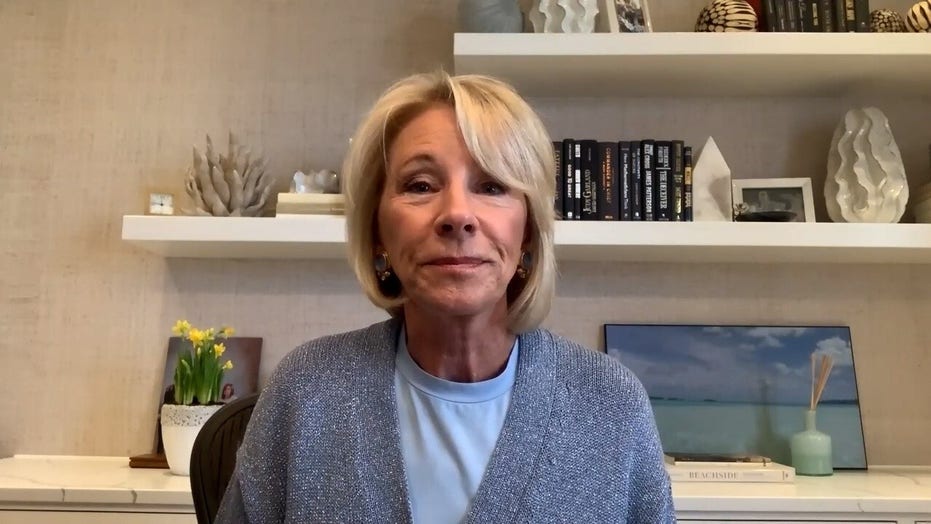 "The last two years has really exposed the inclination of the system to continue to insist that the experts know best and that parents should just let the experts deal with these issues," DeVos said.

"Parents are saying ‘No, enough. These are our children. We're concerned for their future,'" she continued.

Since the start of the pandemic, parents across the country have confronted local school boards, grappling over whether issues involving critical race theory and gender identity should be taught at young ages. Other heated topics include mask mandates and whether trans athletes should be allowed to compete in female sports.

Remote learning led helped raise parents' attention to curricula and class lessons, leading them to realize how little control they have over their children's education, DeVos said. Controversies like Florida’s Parental Rights in Education legislation – which critics dubbed the "Don't Say Gay" bill – highlight a growing belief that school systems are inserting themselves where they don't belong and are teaching young kids about sensitive topics that typically have been left for families to discuss, she added.

"When parents are told at school board meetings to just go sit down and shut up, we know that the system has gone way too far in usurping family responsibility," DeVos told Fox News.

"The federal Department of Education has, in all too many cases, way overstepped its bounds," she added. DeVos said she would have been "very happy to work myself out of a job" while serving as secretary by scaling her department back.

"I think that the functions of the department, the necessary legal functions, could be done elsewhere," she said. "Education is best served when it's at the most local level."

The Department of Education's actions "seem to be a nod to … those who control the system," she told Fox News, suggesting that teachers unions are in charge.

Soon after the department was formed in 1867, it was scaled down out of concern that it "would exercise too much control over local schools," according to its website. But in 1979, it was expanded following a campaign promise from then-President Jimmy Carter.

Members and supporters of the LGBTQ community attend the "Say Gay Anyway" rally in Miami Beach, Florida on March 13, 2022. - Florida's state senate on March 8 passed a controversial bill banning lessons on sexual orientation and gender identity in elementary schools, a step that critics complain will hurt the LGBTQ community. Opposition Democrats and LGBTQ rights activists have lobbied against what they call the "Don't Say Gay" law, which will affect kids in kindergarten through third grade, when they are eight or nine years old. (Photo by CHANDAN KHANNA / AFP) (Photo by CHANDAN KHANNA/AFP via Getty Images) ( (Photo by CHANDAN KHANNA/AFP via Getty Images))

"Since that time, we've spent over a trillion dollars at the federal level alone, specifically with the goal of closing that achievement gap," the former secretary said. "All the data shows that not only has it not narrowed one little bit, but in many cases, it's actually widened."

The achievement gap between disadvantaged and well-off students in math, reading and science was as wide in 2019 as it was for children born in 1954, according to an Education Next report.

DeVos also said there are many "really great teachers" that "don't necessarily buy into the systems approach," but they, along with their students, "have been held hostage. It's time to release them and give all families and teachers education freedom."

A Dept. of Education spokesperson returned Fox's request for comment, "Laws like Florida’s put politicians firmly between parents and educators who should be working together to create a learning environment that is free from discrimination and prepares students for successful careers. Those decisions should be made with input from parents and educators—not politicians."

The spokesperson continued, "The Department remains committed to working with parents, educators, and whole school communities to ensure that schools are providing the necessary academic and mental health supports to help communities recover from the pandemic, keeping politicians out of curriculum decisions that should be made at the local level in conjunction with parents and educators, and providing students with educational environments free from discrimination."