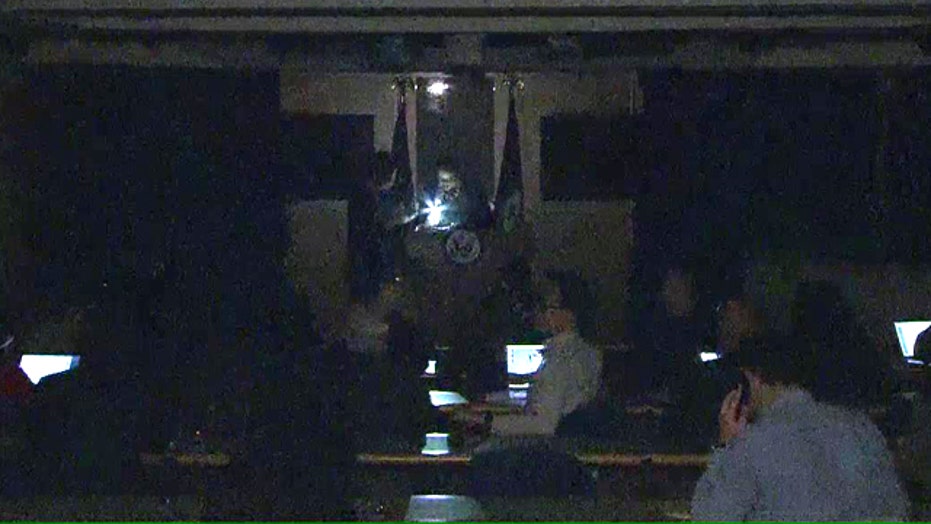 Some power was reported quickly restored but Pepco, the main utility company, estimated on its website map it could be Tuesday night or later Wednesday morning before power was back in some outer areas.

A spokesman for the Southern Maryland Electric Cooperative told Fox News there had been a fire at one of its transmission centers and about 26,000 customers were affected. SMECO is networked with Pepco.

On Tuesday afternoon, Pepco issued a statement saying,  “Shortly before 1 p.m. Tuesday we experienced a dip in voltage in the Washington D.C. area. This was caused by an issue with a transmission line. There was never a loss of permanent supply of electricity to customers….The momentary outage occurred because of customer equipment responding to a dip in voltage. Customers should be able to operate their own equipment at this time. There are no current supply problems."

Although there was no immediate evidence of any terrorist activity, Reuters reported  the DHS was closely monitoring the outage reports.

The State Department’s daily briefing was halted as a result of the power loss, which hit one corner of that building.

At the U.S. Capitol, which has its own power plant and a reserve system, there was only a temporary disruption and everything quickly returned to normal.

Both the House and Senate are out this week, but the building was packed with tourists, whose tours were not interrupted.

At the White House, there were a couple moments of complete darkness in the press area but lights and computers were quickly operational again.

There was no indication what other areas of the White House, if any, might have been affected.

The metro system was reported operating on a backup system.

University of Maryland officials said their entire campus was affected.

The Smithsonian tweeted that the outage affected some museums, and they were evacuated.

Weather in the area was overcast, but there were no storms.