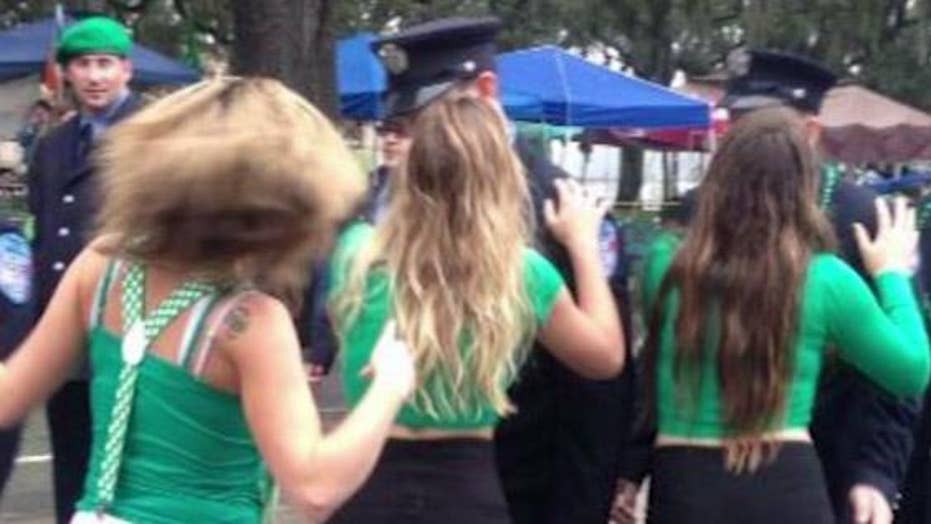 Army says no to smooches for soldiers

For more than 40 years, spectators at one of the world’s largest St. Patrick’s Day parades have darted into the street to peck passing soldiers. But this month, Savannah’s parade committee announced that tradition is not to be continued, sparking frustration from longtime residents.

“Even though rules are meant to be broken, I don’t think traditions are,” said Brian Ferguson, who once marched in the parade as a band member.

Mims Deriso wore the lipstick marks proudly when he paraded, seeing it as appreciation for the military. “It’s a shame it’s got to go,” he said.

A young girl runs into the Savannah St. Patrick's Day parade to plant a kiss on a soldier. (Lizzy Groover)

Brian Counihan also once received those kisses as a cadet in the 1970s, but as this year’s parade chairman, he said it’s time to smudge the smooching for good.

“A few people, you know girlfriends, would run out and hug you and kiss you, and then eventually some of the mothers did it, and it’s just blown up from there,” Counihan told Fox News.

He acknowledged that “it is fun,” but the snowballing number of participants running into the street transformed the tradition into an “accident waiting to happen.”

“I’m not an old scrooge or anything, but we have a parade to look after, we have liability,” Counihan said. He recalled a few years ago when a band member’s lip was busted from eager spectators bumping into paraders.

But the initial push for change actually came from Fort Stewart-Hunter Army Airfield with concerns rooted in something else – consent.

“Taking a fresh look at it, how might a soldier feel if they didn’t want to be kissed?” asked Major Megan Jantos, a public affairs officer with the 3rd Infantry Division. “Soldiers have expressed feeling uncomfortable with this tradition, and leaders have voiced concern at all levels.”

"How might a soldier feel if they didn’t want to be kissed?"

Fox News approached numerous 3rd Infantry Division soldiers, who all said they had “no response.”

Jantos acknowledged that it’s a tradition that has been around for so long, it doesn’t faze most locals. But when she flips the genders – a man running out to kiss any woman – she said more people appear to understand.

“There’s people out there who like to receive appreciation in that form, unfortunately not everybody does, and so we just want to make sure everyone is respected,” Jantos said.

Both Jantos and Counihan said the stoppage of smooches has been in discussion for several years.

“I guess I was more vocal than most chairmen, and it just caught fire,” Counihan said.

Several years ago, the parade committee stopped marchers from throwing candy and beads to spectators “because of children running out and ducking down in front of cars.”

Now, Counihan said they’re stopping something else for the same reason – safety.

Soldiers march to Madison Square as part of the commemorative ceremony for Sgt. William Jasper on the eve of St. Patrick's Day. (Fox News)

Jantos pointed to momentum from recent national discussions around sexual misconduct in the workplace, saying Fort Stewart-Hunter Army Airfield is “always looking to step up and take a fresh look at [their] traditions.”

Though, the Army and parade committee’s push for change is just a request to spectators, so who’s to say if folks with a few shamrock shakes in them will comply.

Savannah’s first St. Patrick’s Day parade traces back to 1824, and officials told Fox News even then it celebrated local military.