Santa Fe High School shooting suspect is in custody along with two persons of interest; KRIV reporter Ivory Hecker has the latest from Santa Fe, Texas.

The Friday morning shooting at Santa Fe High School in Texas that killed 10 people and wounded 10 others left friends and family in tears and shock.

“We never know when our death will come. Cynthia planned on one day retiring and being a full-time grandmother,” John wrote. “It will never happen.”

TEXAS SHOOTING SUSPECT SAYS HE AVOIDED SHOOTING STUDENTS HE LIKED TO 'HAVE HIS STORY TOLD': AFFIDAVIT

Cynthia’s niece, Leia Olinde, 25, said Tisdale was like a mother to her and helped her shop for wedding dresses last year.

"She helped me put it on, she helped fix my hair," Olinde said through tears. "She was wonderful. She was just so loving."

Olinde’s fiancé, Eric Sanders, said of Tisdale that "words don't explain her lust for life and the joy she got from helping people."

Sophomore Zachary Muehe of Santa Fe High School said he was in his art class when he suddenly heard three loud booms.

"It was crazy watching him shoot and then pump," Muehe said of his classmate, the 17-year-old suspect Dimitrios Pagourtzis, who has been charged with capital murder.

Muehe was able to flee to another classroom through a shared ceramics closet.

He said Pagourtzis was wearing a trench coat and a T-shirt emblazoned with the slogan "Born to Kill."

“With a broken heart and a soul that just can’t process all this right now, I have to announce my niece was one of the fatalities,” Pritchett wrote. “Please keep all the families in your thoughts, and hug your children tightly.”

In her grief, Pritchett wrote that she was still trying to locate her niece and “cannot find her at any hospital.”

As of Friday evening, other families still have not located their loved ones, Fox 26 Houston reported.

Sabika Sheikh, a Pakistani exchange student, was confirmed dead by Megan Lysaght, program manager of the Kennedy-Lugar Youth Exchange & Study (YES) Abroad Program, in a letter to the other students in the program.

“It is with the greatest sadness in my heart that I need to inform you that one of our YES students, Sabika Sheikh of Pakistan, was killed today in the school shooting in Santa Fe, Texas,” Lysaght wrote. “Please know that the YES program is devastated by the loss and we will remember Sabika and her families in our thoughts and prayers.”

She said the program would be holding a moment of silence for the girl, who is pictured beaming in a shirt that says "Texas" in a photo being shared on social media.

The Pakistan Association of Greater Houston said on Facebook that Sabika was due to go back home to Pakistan for Eid al-Fitr, a three-day holiday that marks the end of the holy Muslim month of Ramadan.

"May Allah bless her soul and may she RIP," the association’s statement said.

“As an exchange student, Sabika was a youth ambassador, a bridge between our people and cultures. All of us at the U.S. Mission in Pakistan are devastated by and mourn her loss. We will honor her memory," Hale tweeted.

Gayle and Jerry Beddingfield told WSB-TV that they were on "pins and needles" after learning that their niece and nephew were on campus during the deadly shooting.

"We can't do anything because we're so far away. So you feel helpless," Jerry said.

The uncle said when he found out his family members were OK, it was like "the birth of a child."

Paige Curry, a Santa Fe High School student, told Houston’s KTRK-TV that she was not surprised about the shooting.

The reporter asked her “Was there a part of you that was, like, ‘This isn’t real, this – this would not happen in my school?’”

“No, there wasn’t,” Curry said shaking her head.

“Why so?” the reporter asked.

"It's been happening everywhere. I've always kind of felt like that eventually it was going to happen here, too," Curry said. "I don't know. I wasn't surprised. I was just scared."

“Honestly, I just had the thought in my head that somebody was going to come up behind me and hurt me, shoot me, kill me. I’m still jumpy from it,” Shrader told the Times. “I don’t know who to trust anymore, at all … This should be our safe place.”

Resident Billie Scheumack, 68, told the Times she saw students from the high school running, “scared and clutching their phones,” about a block from the school, the report said.

“In this little town, you wouldn’t think something like this could happen,” Scheumack said. 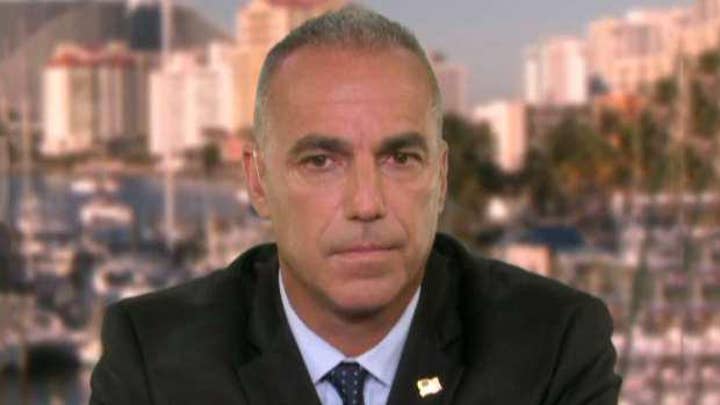 “I started replaying what happened to us in my head,” Jesionowski told the Times. “Over and over.”

It was the last day of the school year for seniors at Marjory Stoneman Douglas High.

The deaths from the Santa Fe High School shooting re-ignited the debate over gun regulations.

"Santa Fe High, you didn't deserve this. You deserve peace all your lives, not just after a tombstone saying that is put over you. You deserve more than Thoughts and Prayers, and after supporting us by walking out we will be there to support you by raising up your voices," tweeted Parkland student Emma Gonzalez, one of the gun reform movement's leading voices.

"What are you going to do if some guy comes in your house and points a gun at you? You can't do nothing with a knife," he said.

Friday's assault was the deadliest in Texas since a man with a semi-automatic rifle attacked a rural church late last year, killing more than two dozen people.