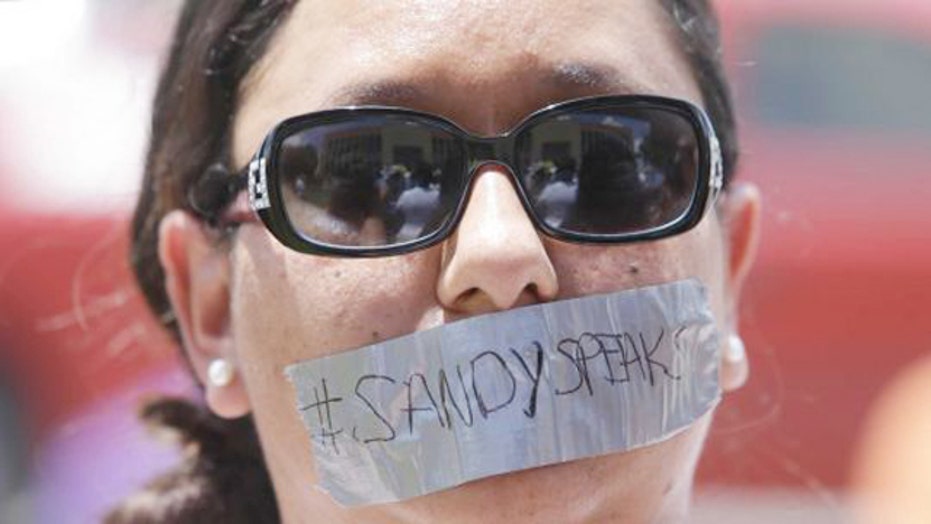 Autopsy report points to suicide on 'The Kelly File'

HOUSTON – The family of a black woman found dead in a Texas jail three days after a confrontation with a white state trooper filed a wrongful-death lawsuit Tuesday against the officer and other officials, saying it was a last resort after being unable to get enough information about the case.

Sandra Bland, a Chicago-area woman, died by what authorities say was suicide in her Waller County jail cell on July 13. Her family and others previously questioned that, and criticized the trooper who stopped her for failing to signal a lane change.

"The bottom line is she never should have been inside the jail cell. Period," Bland's mother, Geneva Reed-Veal, said at a news conference. Reed-Veal, her Bible within reach, said she was confident Bland "knew enough about Jesus" that she wouldn't hang herself and her feelings as a mother say her daughter didn't. But "anything is possible," she said.

"Now I'm the first one to tell you, if the facts ... show without a doubt that that was the case, I'll have to be prepared to deal with that," she said.

Bland's death came after nearly a year of heightened national scrutiny of police and their dealings with black suspects, especially those who have been killed by officers or die in police custody.

Bland was in Prairie View, northwest of Houston, when she was stopped July 10 for a minor traffic infraction. Dashcam video shows the confrontation swiftly escalated after she objected to being told to put out her cigarette. Encinia at one point is seen holding a stun gun as he says, "I will light you up!" after Bland refuses to get out of her car. Bland eventually was arrested for allegedly assaulting the trooper.

The lawsuit contends Encinia falsified the assault allegation to take Bland into custody, that Waller County jail personnel failed to keep her safe and free from psychological injury or harm, and that she was placed in a cell "with a variety of inappropriate items for a jail cell, including a large garbage can, garbage bags, exposed beams, cords, and other items."

An autopsy determined that Bland hanged herself from a partition in the cell. Her family has previously said she was looking forward to a new job.

"In the face of Sandy being the light that she was, it is very difficult for them to get their minds around the notion that she would hurt herself," the family's attorney Cannon Lambert said. "At the same time, this family is aware of the possibility."

Lambert said the family's own autopsy has been delayed by missing information from authorities, and that information the family has received from law enforcement has been inconsistent.

Since her death, authorities have released the findings of Bland's autopsy, her arrest affidavit, an initial toxicology report, surveillance video showing her in the jail, her jail intake records and the dash camera video.

Lambert said the family also needs to know what was done to try to help her.

The lawsuit says the Department of Public Safety failed to property train Encinia, that Waller County jail personnel failed to properly monitor Bland "to keep her safe and secure," and that the county inadequately trained jail employees on how to handle inmates who are potentially suicidal.

Larry Simmons, an attorney for Waller County, said the county would soon file a response to the lawsuit "and our court filings will clearly articulate the county's legal position in this matter."

"The county expresses its sympathy to Sandra Bland's family," Simmons said. "We look forward to presenting all the evidence to the court, in the context of the applicable standards for civil liability, and intend to vigorously defend the case."

The Department of Public Safety said in a statement it had not received notice of the lawsuit "and we do not discuss potential or pending litigation."

Lambert expressed dismay that Encinia remains on administrative leave rather than being fired. The trooper, on the force for just over a year, has been placed on leave for violating unspecified police procedures and the department's courtesy policy.

"We are asking for bold, decisive action," Lambert added. "The fact that it hasn't happened yet is a frustrating thing."

Lambert also called on the Department of Justice to launch its own investigation, saying the case needs a fresh and unbiased look.

"This family's motivation is that they don't want to see this sort of thing happen again to another family," Lambert said.