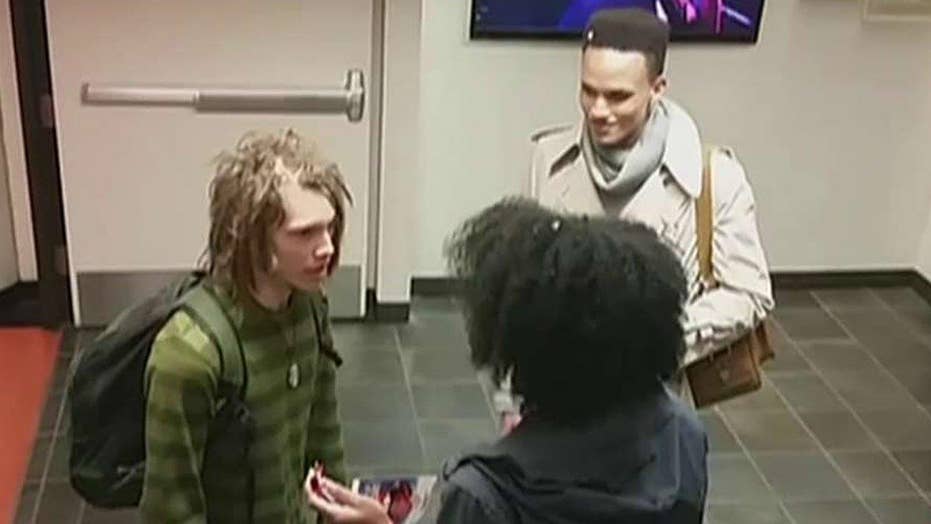 San Francisco State University said Wednesday it is investigating an incident involving an African-American woman seen on video grabbing a white student in a confrontation over his dreadlocks.

"You're saying that I can't have a hair style because of your culture? Why?" Cory Goldstein asks the unnamed woman in the video posted on YouTube. "Because it's my culture. Do you know what locks mean?" the woman responded.

He then tells her dreadlocks were part of Egyptian culture and tries to walk away but the woman blocks him and is seen grabbing Goldstein's arm. She then turns to the person filming to block the camera with her hand.

Goldstein said he filed a police report after Monday’s heated argument, but he’s not looking to press charges and said he would like to have a “respectful discussion” with anyone about his hair.

“It's something I've had since I was 17 years old and something that's part of who I am. I believe they are powerful and helped amplify myself and helped me connect to this world," Goldstein told KGO-TV. The confrontation comes as race and sensitivity on campus are debated in universities across the nation.

The university said it has started a probe in the incident and that the student who filmed it requested charges be filed against the woman.

"University police responded to the incident when it occurred and took a report at the scene," the university said in a statement.

Campus police said once the investigation is over, the case will be forwarded to the San Francisco District Attorney’s, who will decide whether charges will be filed.

As of early Thursday morning, the video had more than 2 million views on YouTube. And even though the video's description says the unidentified woman was a campus employee, university officials said that none of the people in the video are employed by San Francisco State, according to the Los Angeles Times.

"San Francisco State University promotes the rights of the campus community to engage in free speech, but does not condone behavior that impedes the safety or well-being of others," the university said. "We are taking the matter seriously and will promptly and thoroughly investigate this incident through applicable University channels, including our campus student conduct procedures."