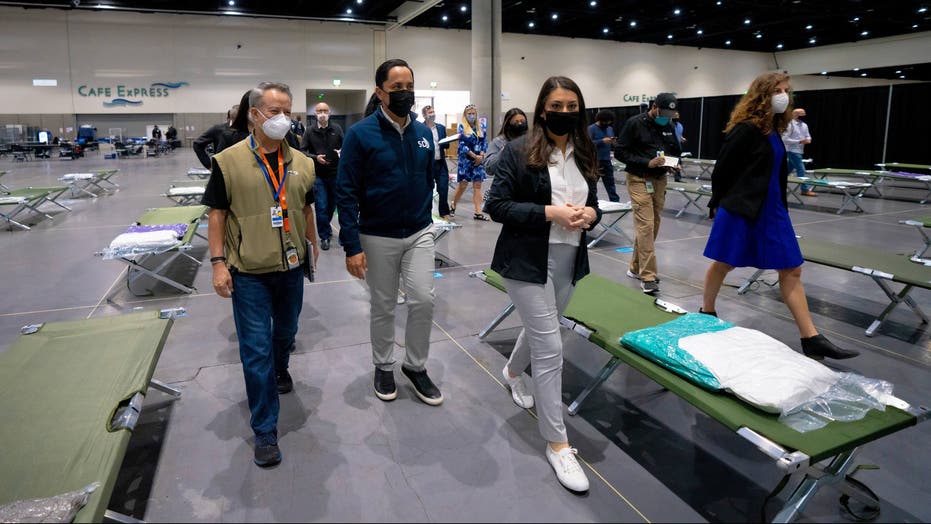 EXCLUSIVE: Unaccompanied child migrants housed at the San Diego Convention Center have an alarmingly high COVID-19 infections rate – but local teachers will be providing them in-person instruction before their own students.

Hundreds of migrant girls have been housed at the facility as the Biden administration is trying to figure out how to handle a crisis of unaccompanied children flocking to the southern border.

Of more than 700 unaccompanied girls transferred to the center, at least 82 have tested positive for the virus as of Tuesday afternoon, the U.S. Department of Health and Human Services told Fox News Tuesday evening.

San Diego Mayor Todd Gloria along with other officials are among the group of elected officials who were given a tour of the temporary youth shelter at the center, Saturday, March 27, 2021 in San Diego. The girls will be separated in sleeping areas that will host up to 50-girls per pod. The temporary shelter will max out about 1450 girls. (Nelvin C. Cepeda/The San Diego Union-Tribune via AP)

All of the girls had been tested before being transported to the temporary facility Monday, with 59 testing positive for coronavirus. They were being housed separately and anyone injured or ill was being treated on-site by staff from Rady's Children's Hospital, although children with serious illnesses are not taken to the facility to begin with and go right to a hospital.

San Diego County reported roughly 1,800 new cases out of an estimated population of more than 3 million in the past week. Although none of the COVID-positive migrants required hospitalizations, 82 cases out of roughly 700 is about 9%, compared to the .0018% rate of to San Diego residents.

"That’s a case rate of 10,933 per 100,000 – or 437 times higher than the case rate threshold that schools are allowed to reopen in California," said Scott Davison, who is suing the state to try and force a quicker school reopening. "Threshold for reopening in California is 25 per 100,000."

A San Diego Unified School District spokeswoman said the teachers were giving up their vacation time to volunteer at the convention center but did not address the concerns about the facility’s coronavirus rate.

Minor children rest inside a pod at the Donna Department of Homeland Security holding facility, the main detention center for unaccompanied children in the Rio Grande Valley run by U.S. Customs and Border Protection (CBP), in Donna, Texas, Tuesday, March 30, 2021. The minors are housed by the hundreds in eight pods that are about 3,200 square feet in size. Many of the pods had more than 500 children in them. The Biden administration on Tuesday for the first time allowed journalists inside its main detention facility at the border for migrant children, revealing a severely overcrowded tent structure where more than 4,000 kids and families were crammed into pods and the youngest kept in a large play pen with mats on the floor for sleeping.(AP Photo/Dario Lopez-Mills, Pool)

"Some of our educators have volunteered to give up their vacation time – this week is our spring break – to help hundreds of teenage girls who are sheltering in our city, away from their families and in some cases thousands of miles from home," she told Fox News Tuesday.

"Our teachers have volunteered to help -- we are not paying them in any way -- because caring for children is central to who they are as human beings. The power of their example should inspire us all, and hopefully many others will be inspired to show these girls that we are a compassionate community."

The district is the second-largest in the state and the largest in San Diego County. It plans to reopen on a hybrid basis on April 12, combining in-person and online learning.

"We see that it’s safe, yet we have teacher unions resisting this," said Jonathan Zachreson, who has organized a petition to reopen schools across the state. "You see this from San Diego. Up in Oakland, vaccinated teachers are refusing to come back…even though their school district is wanting it to happen."

Zachreson and supporters of his movement are calling on Gov. Gavin Newsom to mandate a school reopening of five-days of in-person learning for all students.

OAKLAND TEACHERS REFUSE TO RETURN TO SCHOOL, DESPITE GETTING COVID VACCINE PRIORITY

Teachers in the Golden State have been prioritized for vaccine doses, he said, but have been reluctant to return to the classroom.

Even with vaccines, the spread of COVID-19 remains a concern – although the convention center girls have a higher case rate than local students and the surrounding community.

"Another concern that hasn’t really been discussed – these same teachers are volunteering at this facility, [where there are] exponential COVID rates, much higher than what was allowed for [Centers for Disease Control and Prevention] guidance for in-person instruction," Zachreson added. "Is there a risk that these teachers may even get infected at the facility and then bring it to the schools, where they are going to be working?"

"Who’s gonna get the blame for the COVID spread?" he asked.