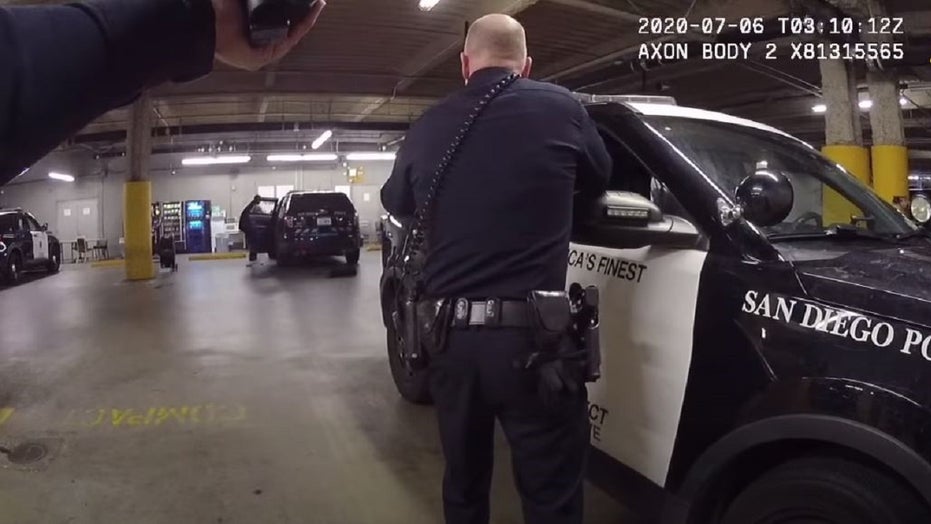 San Diego police released a video Wednesday of the shooting of a man who slipped off of his handcuffs and fired an officer's gun before he was shot and subdued at police headquarters.

While at police headquarters, he was left in the back of a patrol SUV parked in the sally port as an officer was filling out booking paperwork. Bergman slipped out of his handcuffs, broke a plexiglass divider in the vehicle and grabbed an officer's gun from inside a backpack, authorities said.

The nearly 11-minute video shows a man alone in the car when an officer opens the passenger door on the driver's side before immediately closing it. Three other officers walk up to the vehicle and pull out their weapons.

A body camera worn by one of the officers records Bergman being instructed to show his hands.

The officers back up and some take cover behind concrete beams.

Police said the man inside fired a round out the rear of the vehicle. The footage shows debris flying in the air, which police said was from the bullet penetrating the rear window.

No one is hit and two officers return fire.

The man then extends his bloody arm through the shattered passenger window to unlock it, according to the footage. He gets out and walks to the back of the SUV. He then attempts to open the driver's door when more shots are fired at his direction.

A man was shot at San Diego police headquarters Sunday after he slipped off his handcuffs, grabbed an officer's gun from a backpack inside a police SUV and fired, police said.  (San Diego Police Department )

He stumbles slowly to the ground, closing the rear door with his body in the process.

Bergman was shot in the chest but survived. The video shows what police said was a handgun in his waistband. The names of the officers who fired their weapons have not released. It was unclear if they have been pulled from duty.

The shooting is the second involving a San Diego police officer in just over a week. On June 27, two officers shot and killed a man they recognized from a flyer regarding a robbery, police said. Authorities said the man pulled a gun on the officers before he was fired upon.