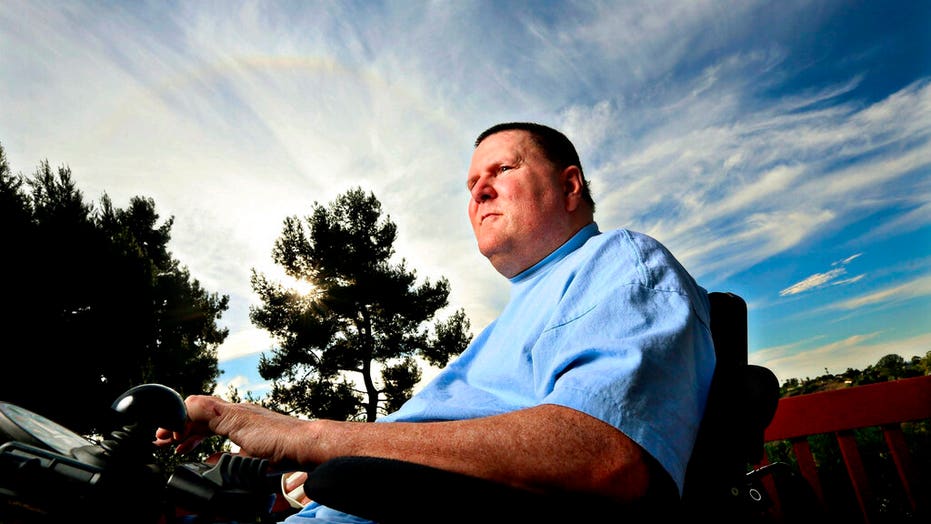 A former San Diego Padre-turned-police officer who was paralyzed from the neck down 17 years ago during an on-duty shooting died Thursday.

Dan Walters’ death was announced by the San Diego Police Officers Association, which did not provide the cause or other details. He was 53.

In 2013, Dan Walters, a former police officer who was paralyzed in 2003 after being shot in the neck, sits in his wheelchair on his back porch at home in San Diego.  (San Diego Union-Tribune via AP)

Walters was a catcher drafted by the Houston Astros in 1984 before eventually playing in the 1992 and 1993 seasons for the Padres. A spinal injury ended his career. In 84 career games, he had 64 hits in 273 at-bats, with a .234 batting average.

Following his baseball career, he became a San Diego policeman in 1998.

But in 2003, he was shot in the neck during a traffic stop of a domestic violence suspect and fell to the street, where a passing vehicle hit him, leaving him with two crushed cervical vertebrae. The gunman was shot and killed by his partner.

Walters was paralyzed from the neck down except for some movement in his left hand.

"I certainly don't regret being at the scene that night," he said. "Perhaps people were saved because I happened to be there."

San Diego Padres catcher Dan Walters (C) tries to avoid being run into by sliding Chicago Cub Derrick in May 1993 as he scores in the second inning at Wrigley Field. May scored on a single by Steve Buechele as umpire Angel Hernandez (L) looks on. (Photo credit should read EUGENE GARCIA/AFP via Getty Images)

The San Diego Police Department said it lost "another hero who made the ultimate sacrifice."

The Padres are "deeply saddened" to hear of Walters' death, the team tweeted.