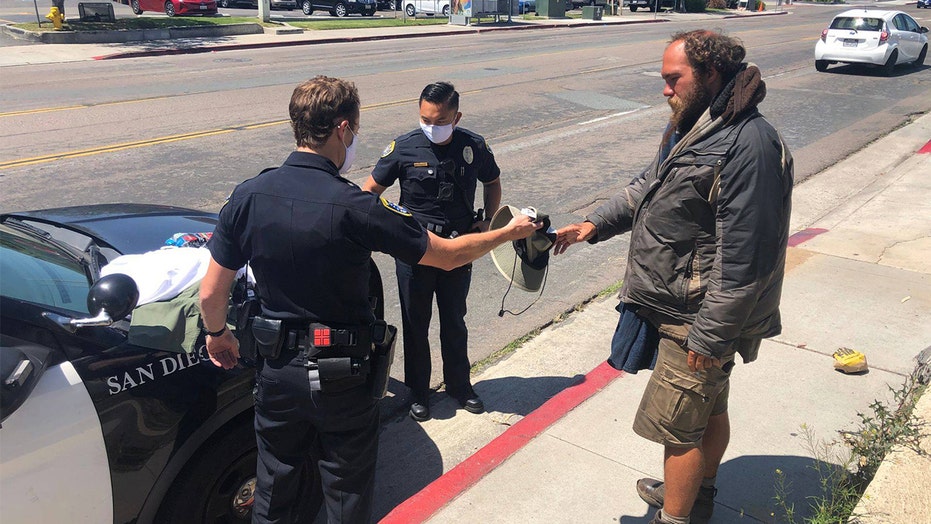 Two San Diego police officers met a homeless man wearing tattered shorts earlier this week – so they went to a store and bought him some new clothes.

The Southern Division officers also gave him “additional resources in the hope that it will help get him off the streets,” the San Diego Police Department wrote on Facebook.

The department did not identify the officers or the homeless man in its post -- but said that the pair bought him a new hat, fresh shorts, shirts and underwear.

A photo of the handoff shows one of the masked officers handing the homeless man a wide-brimmed hat on a bright, sunny day, and the rest of the clothes can be seen resting on the hood of a squad car.

San Diego has been plagued by a homeless crisis in recent years, but officials announced last Tuesday that the city decreased its homeless population in 2019 and is continuing that trend in 2020.

The number of homeless people in the city dropped by 12 percent at the start of this year compared with last, according to Mayor Kevin Faulconer and the Regional Task Force on the Homeless.

“This year’s count shows a dramatic reduction in the number of people living outdoors, and that San Diego is continuing to lead with real solutions to this statewide crisis,” Faulconer said in a press release that highlighted San Diego as the only major county in California to see a decline in homelessness last year.

Officials said that amid the coronavirus crisis, the city has also changed its approach to the fight against homelessness, temporarily halting evictions and converting the San Diego Convention Center into a temporary shelter.

“Since the count and in response to COVID-19, hundreds more who were living on the streets have found shelter in the San Diego Convention Center and we enacted an eviction moratorium to help prevent folks from losing their home in the first place,” Faulconer said.

San Diego Mayor Kevin Faulconer said more than 5,000 people in the city do not have the option to "stay home" during the coronavirus pandemic and that the city will use the San Diego Convention Center as a homeless shelter. (Google Maps) (Google Maps)

The city also implemented a “proactive testing effort” in mid-April at the temporary shelter to identify people who may be staying there with the coronavirus but without symptoms, according to authorities. People who test positive are sheltered in isolation in a bid to slow the virus’ spread.