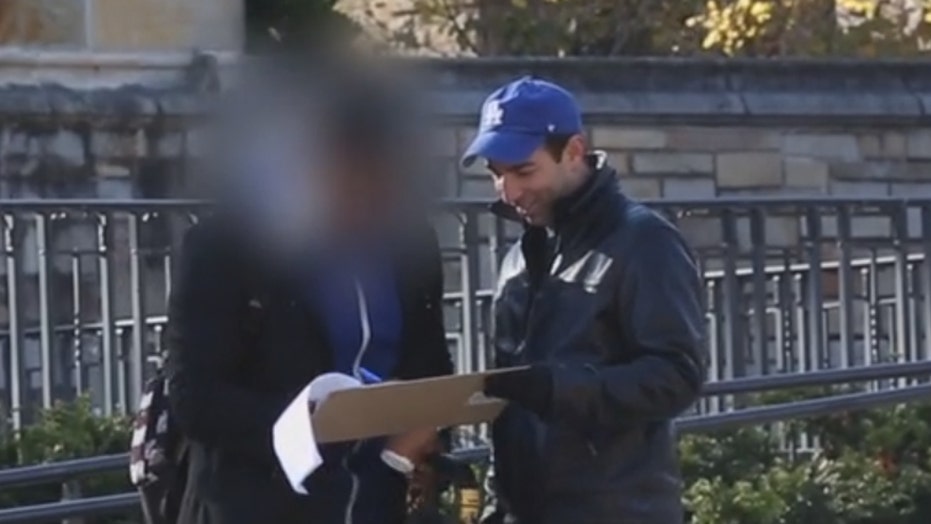 Ami on the Street: Satirist Ami Horowitz tests the waters at Yale University to see if today's Ivy league students would actually sign a petition to repeal the First Amendment

Members of the Yale University community on Thursday responded with a mix of embarrassment, sadness and literal disbelief to a viral video showing students there freely signing a petition that calls for the repeal of the First Amendment.

“It numbs the mind that dozens of Yale students could sign a petition to revoke the First Amendment,” freshman Grant Richardson wrote FoxNews.com in an email. “Besides the fact that the First Amendment lists the most fundamentally important rights we hold as Americans, it is rather embarrassing to think Yalies could not see the irony that they were petitioning away – their right to petition.”

Richardson, responding to a video by filmmaker and satirist Ami Horowitz that first aired on FoxNews.com Wednesday, said he hopes the actions of those shown in the video don’t reflect on him or many other students.

“It is mortifying to think that family, friends and future employers could equate such behaviors to Yale, and by extension, to me,” he said. “I can only hope that my fellow students were answering in jest.”

A member of the Yale Law School faculty also responded to the video, and wasn’t happy with what he saw.

“It’s a sad commentary on the present state of public opinion,” said Professor Bruce Ackerman. “This is a moment at which fundamental principles are under assault from both the left and the right.”

“The collection of 50 Yalie signatures for a petition to repeal the First Amendment is a sad commentary on the present state of public opinion.”

“It does not remotely pose the same danger as the support of all Republican candidates, with the exception of Rand Paul, for President Obama’s unilateral war against ISIS in plain violation of the Constitution,” Ackerman said.

That part of the professor’s response didn’t sit well with Horowitz.

“This is exactly part of the problem. Why would Yale students, or university students anywhere in this country, feel a fidelity to our fundamental beliefs, when their professors try to shoehorn in anti-American sentiment at every opportunity?” he told FoxNews.com.

Yale University’s spokesman had a very different reaction to the video, essentially saying he did not believe the accuracy of what he saw.

“There are a number of heavily edited prank videos like this one circulating lately in which someone surreptitiously records people while pretending to support a position that they actually oppose, and trying to get the individuals they speak with to agree with them,” Tom Conroy wrote in an email. “I have to acknowledge that I don’t take them seriously as an accurate representation of what every person interviewed or shown in the videos believes.”

In the video, in which he is shown clearly explaining to several students that the petition calls for repeal of the First Amendment, Horowitz said he was able to quickly collect nearly 60 signatures in less than an hour. Among those who signed were students who appeared to enthusiastically support the abolition of their First Amendment rights.

“I think it’s really awesome that you’re out here,” one man says in the video.

Horowitz said he shot the video at Yale in an effort to gauge the true level of anti-free speech sentiment on college campuses. Yale is among a number of schools around the country where students or faculty members have lobbied for “safe spaces” where ideas, statements and persons deemed disagreeable or offensive aren’t welcome.