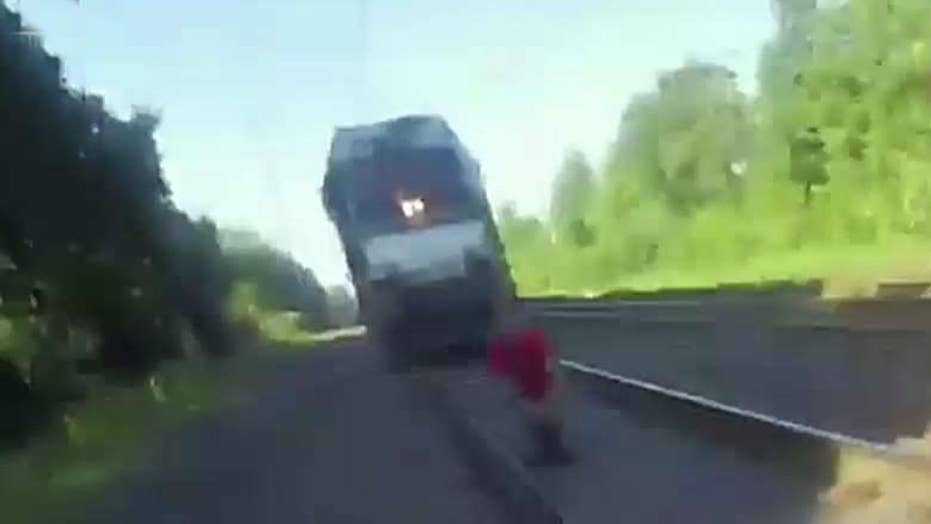 Cop saves man from being hit by train

New Jersey police officer saves man from being run over with seconds to spare.

A rookie police officer marking his seventh month on the force had a memorable anniversary after saving a man who was just seconds from being struck by an oncoming commuter train in New Jersey.

The dramatic incident was captured on Perth Amboy Patrolman Kyle Savoia’s body camera. The footage shows him sprinting down the tracks and screaming at a man while waving to the oncoming train to stop.

The unidentified man got off the tracks with mere moments to spare.

Heidi Burke, who was on the platform waiting for the train, told the news station Savoia was “a real life hero.”

“He just jumped in front of the train,” Burke said. “I saw the red shirt, and a body attached to it go flying to one side, and the cop going to the other. And the train pulled in between them.”

The unidentified man can be heard on the body camera video talking to Savoia.

The man, who appeared distressed, was taken to a nearby hospital for evaluation.

"As police officers, our job is to make quick decisions in difficult situations and act on them," Savoia said in a statement released by the city. "At the end of the day, all that matters is everyone gets home safe."

Police work runs in the Savoia family. His father was Sgt. Kevin Savoia Sr., who served for 28 years before his death in 2016, and his grandfather served on the force for 25 years.

His mother, Donna Savoia, said her late husband and father-in-law would have been proud.

“It has me very emotional,” she told PIX 11. “I watched the video. I was in shock, ya know. To see him do what he was hired to do, it makes me very proud, to also be following in his father’s and his grandfather’s footsteps.”

It's unclear why the man was on the tracks.