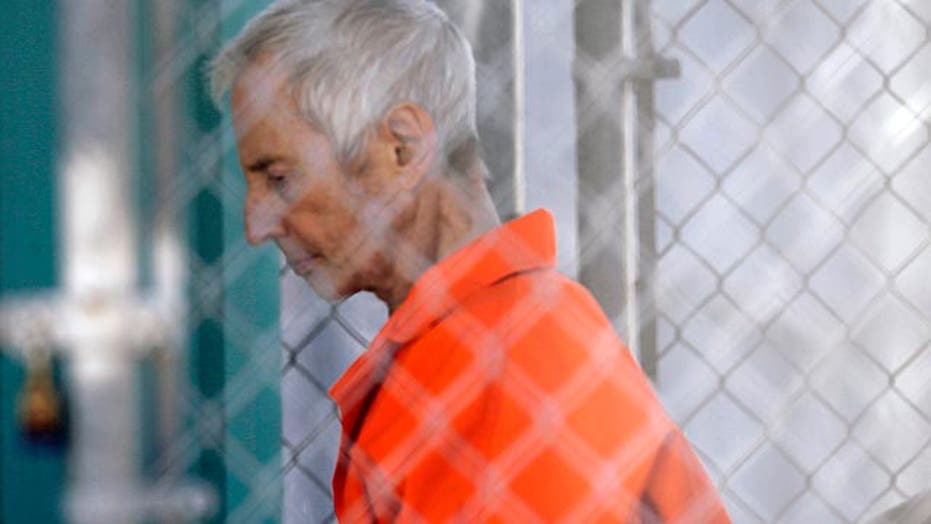 Millionaire real estate scion Robert Durst, who was sent to a Louisiana facility for mentally incompetent inmates after being charged with a 2000 murder in Los Angeles, now is reportedly being eyed in the disappearances of two California teenagers in the 1990s.

Durst, who was acquitted of murdering his Galveston roommate in 2004, and is the subject of the HBO documentary "The Jinx," is being held in New Orleans on a gun charge and awaiting extradition to Los Angeles even as detectives in Houston search homes the 71-year-old owns there and authorities in Northern California are reportedly revisiting him in connection with the disappearances of Karen Mitchell and Kristen Modafferi. Mitchell, who vanished on Nov. 25, 1997, had volunteered at a homeless shelter in Eureka, Calif., where Durst had been spotted, while Modafferi was a North Carolina college student visiting San Francisco when she disappeared on June 23, 1997.

“I really can't confirm or deny that Durst is a person of interest because anything said about the investigation could potentially hinder the investigation,” Humboldt County District Attorney Maggie Fleming told the Los Angeles Times.

Eureka police Capt. Steve Watson also stopped short of identifying Durst as either a suspect or person of interest in the Mitchell case.

“We are very interested in any information Mr. Durst may have in connection with the disappearance” of Karen Mitchell, Watson said.

The cross-dressing Durst, whose family owns an extensive portfolio of office buildings in Manhattan, was sent Tuesday night to a mental health facility at a Louisiana state prison because of an acute medical condition, authorities said. The move -- which was approved after much legal wrangling -- came as reports of criminal investigations involving Durst surfaced around the country.

Durst’s attorneys fought the transfer to an Orleans Parish Sheriff’s facility at a state prison, calling him competent and suffering only from Asperger’s syndrome, a mild form of autism that he was diagnosed with as a child.

Durst is charged with the murder of Susan Berman in Los Angeles 15 years ago, and has been suspected -- but never charged -- in the disappearance of his first wife in New York. In 2003, he was acquitted of murder in a the killing and dismemberment of Morris Black in Texas. He waived extradition in the Berman case in New Orleans, but authorities there charged him late Monday with being a felon in possession of a gun because he had a revolver and carrying a weapon while possessing pot when he was arrested Saturday. It was not clear how soon he would be returned to California.

In "The Jinx," a documentary about Durst's troubled life, he was recorded mumbled about how he "killed them all," providing a dramatic kick to the end of the series. But a law enforcement official said his arrest on the murder charge was based on words he wrote.

Analysis linking a letter Durst wrote to his friend Berman a year before her killing with one authorities believe only the killer could have written to point police to her body was the key new evidence in the long-dormant investigation into the 2000 killing, sources told The Associated Press.

Durst could face the death penalty in the case of Berman, the daughter of a mobster, because of special circumstances that allege he ambushed her and murdered a witness to a crime - the disappearance of his first wife.

The Associated Press and Fox News' John Roberts contributed to this report.