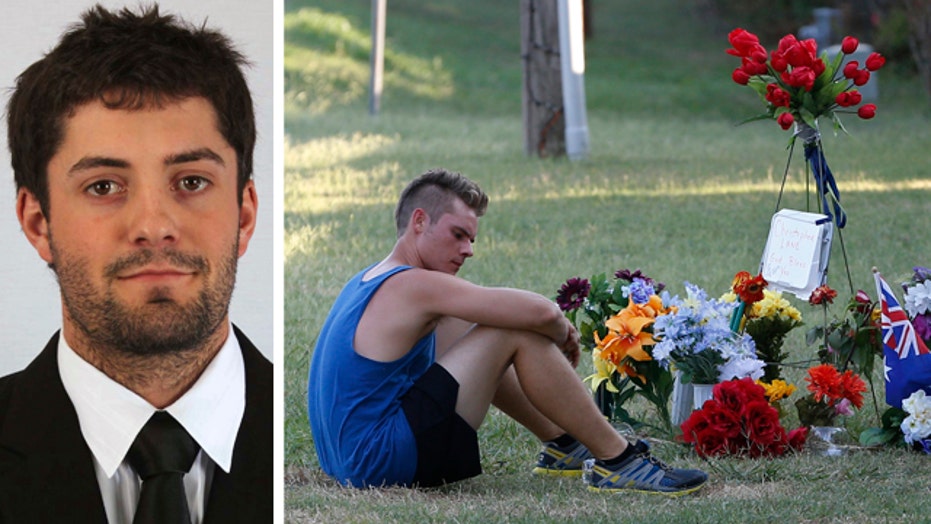 Reaction to issue of race in the case

Civil rights leader Jesse Jackson, who has been recently criticized for remaining silent on racially-charged crimes in which whites were the victims, said the shooting of a white jogger in Oklahoma by three young men is "frowned upon."

The oddly tepid remark came in a tweet, and was followed by a lengthier statement in which Jackson pleaded for an end to violence in general.

"Praying for the family of Chris Lane. This senseless violence is frowned upon and the justice system must prevail," Jackson tweeted.

Lane was fatally shot last Friday as he went for a run in in the town of Duncan, which is about 30 miles southwest of Oklahoma City. He was on a baseball scholarship at East Central University in Ada, Okla., and had been visiting his girlfriend when he was shot in the back and killed.

One Twitter response to Jackson's tweet said, "But I guess you aren't 'Outraged' and won't be marching over it huh?"

The Wall Street Journal ran an editorial Thursday calling Lane's killing as 'troubling' as that of Martin, but noted the general silence from Jackson, Rev. Al Sharpton and even the White House on the matter.

To be sure, police in Oklahoma call the shooting random. One suspect allegedly told police that he and other boys were bored and that they followed Lane and killed him for "the fun of it." Two of the suspects appear to be black.

Race was not mentioned by police but a recent report from The Daily Caller pointed out that one of the suspects had posted racist tweets in the past, including, “90% of white ppl are nasty. #HATE THEM.”

Jackson has been criticized for comments he made during the Zimmerman trial. He called Florida an ‘apartheid’ state and compared Martin’s killing to civil rights clashes in Selma, Ala.

Jackson, in an interview with The Associated Press, defended his remarks. He cited the state's voter laws and incarceration rates of blacks versus the general population as examples of "apartheid like conditions."

A phone call and email from FoxNews.com to Jackson was not immediately returned. Jackson has also been recently criticized for not speaking publicly of the brutal beating aboard a school bus caught on cellphone and surveillance video. He later mentioned the school bus attack on a Facebook post about Oklahoma killing.

"The recent incidents of violence in America most notably the murder of Christopher Lane an aspiring student athlete from Australia in Oklahoma and the attack of a student on a school bus in Florida once again calls each of us to a collectively resist all forms of violence in our society," the post said.