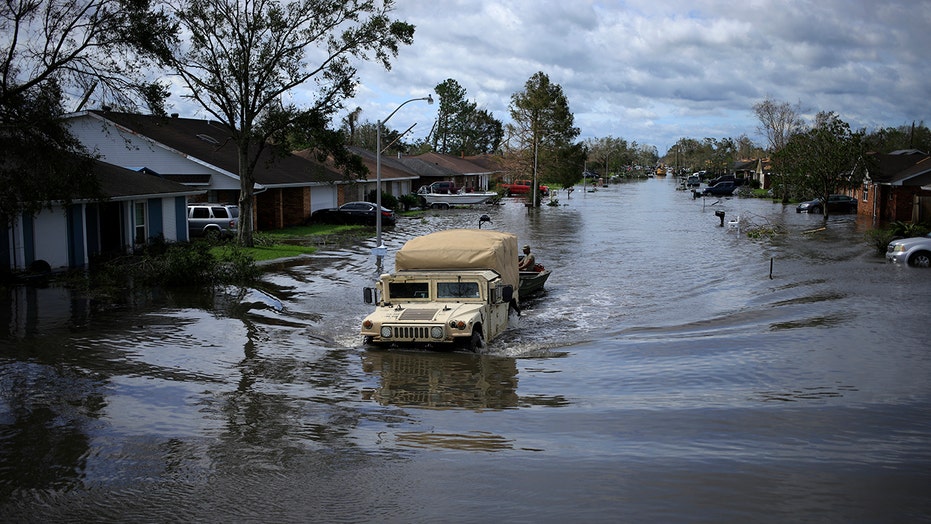 Rep. Steve Scalise (R-La) says there are massive power outages across the state following the deadly storm, which could continue for weeks.

Louisiana communities hit by Hurricane Ida started picking up the pieces this week, as more than a million people were left without power and hundreds of thousands faced shortages of drinking water.

Rescuers traveled by boat, high-water trucks and helicopters, and crews planned to go door-to-door in the areas most impacted by the storm.

She said they handled requests "one at a time," noting that their communications had been impacted by either spotty service or no service.

In LaPlace, the storm tore roofs off homes and flooded subdivisions.

Hospitals were forced to evacuate dozens of patients on Monday.

Some places were also facing shortages of drinking water and 18 water systems were out and 14 more were under boil-water advisories.

Ida was blamed for at least four deaths in both Louisiana and nearby Mississippi, where two people were killed Monday night when seven vehicles fell into a 20-foot-deep hole near Lucedale.

The Louisiana Department of Health wrote in tweets that the death of a man who drowned after attempting to drive through floodwaters in New Orleans was considered to be storm-related.

"His age is unknown at this time pending ID of the victim," the department wrote.

Another person was confirmed to be deceased in Louisiana after the Ascension Parish Sheriff's Office received reports of a citizen "possibly injured from a fallen tree at a residence off of Highway 621 in Prairieville."

NOLA.com reported Tuesday that nine people in St. Tammany Parish were taken to the hospital overnight due to carbon monoxide poisoning from generator use.

A National Guard vehicle drives through floodwater left behind by Hurricane Ida in LaPlace, Louisiana, on Monday, Aug. 30, 2021. The storm, wielding some of the most powerful winds ever to hit the state, drove a wall of water inland when it thundered ashore Sunday as a Category 4 hurricane and reversed the course of part of the Mississippi River.  (Luke Sharrett/Bloomberg via Getty Images)

People who had evacuated ahead of the storm were instructed to stay out due to hazardous conditions.

Schools announced indefinite closures, according to NOLA.com, and the New Orleans airport said airlines had canceled all incoming and outgoing flights for Tuesday and had 197 cancellations on Wednesday.

Notably, FEMA created a rumor-control page on Monday, writing on Twitter that a false rumor was being shared on social media and text messages "saying FEMA is paying for hotels in Louisiana due to the recent storm."

"This is false. You may apply for FEMA assistance online at http://DisasterAssistance.gov or by calling 1-800-621-3362," the agency said.

"#NOPD has deployed anti-looting teams across the city in order to protect our citizens' property as we continue the recovery process. Looting will NOT be tolerated and encourage everyone to be good neighbors and say something when you see something," the department tweeted on Monday afternoon.

Though the storm has moved out of the area, Edwards said Monday that there was no clear timeline for when power would be restored to the state.

Power crews rushed into the region. Louisiana’s governor said 25,000 utility workers were on the ground in the state to help restore electricity, with more on the way.

Still, power officials have warned that it could be weeks before electricity is restored in some areas.

In a Tuesday tweet, utility Entergy wrote that "once damage assessment is complete" the company could provide customers with estimated restoration times.

"Customers in the hardest-hit areas should plan for the possibility of experiencing extended power outages," Entergy warned.

Ida, which has since been downgraded to a tropical depression, was last reported over northern Mississippi, moving northeastward.

Preliminary reports suggest Ida is the fifth-strongest storm ever to make landfall in the continental U.S., according to NASA Earth.