A man stands in the water at the beach ahead of Hurricane Irma's expected arrival in Fort Lauderdale, Florida, U.S., September 9, 2017. REUTERS/Carlo Allegri - RC12C86B5960

Just a few hours before a mandatory curfew was to go into effect for the majority of Miami, a handful of residents and tourists who decided to stay put ahead of Hurricane Irma spent time walking the abandoned streets and watching the waves grow as the potentially catastrophic storm inched closer to the Sunshine State.

The wind and water – both unpredictable forces - kicked up considerably. Irma, the most powerful storm to hit the area in a decade, ravaged Cuba Friday night as a Category 5 storm before being downgraded to a Cat-3 storm Saturday, though it is expected to strengthen again.

Florida Gov. Rick Scott warned Saturday, “This is a life threatening situation. Our state has never seen anything like it.”

More than 5 million people – about 25 percent of the state’s population - were ordered out of Florida ahead of the storm.

Some listened. Some didn’t.

As the wind howled, several cranes in the downtown area swayed dangerously toward each other and nearby buildings. At one point, this reporter witnessed three large cranes circling. 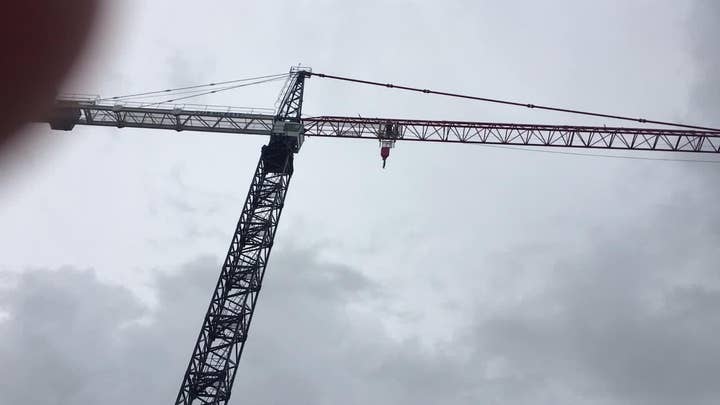 A few blocks down the road, Bill and Shelly Wimberly took a stroll through the mostly-abandoned streets of Miami. They were among a handful of people trying to squeeze in some time outside before the mandatory curfews went into place starting at 7 p.m.

In Miami Beach, one shirtless man wearing hot pink arm floaties tied himself to a pole and declared that’s where he planned to ride out the storm. Some people within earshot laughed. Others rolled their eyes. One called him, “stupid as (expletive.)”

About 35 miles north in Hollywood Beach, the boardwalk was still fairly busy by mid-afternoon. The natural disaster brought an eclectic group to the area including self-described “hurricane historian” Nathan Parks.

The Cuban-born Floridian was on the beach with a homemade metal detector made out of aluminum cans. When asked by Fox if he had ever found anything with the device, he declared, “Not even a dime.”

Florida has been preparing for Irma for more than a week now, which included bolting down palm trees and securing the state’s famous pink flamingos.

Zoo Miami announced its birds would spend the storm in their steel cages – not in a public bathroom like they did 25 years ago when Hurricane Andrew tore through town.

The iconic picture taken by staffer Ron Magill became one of the most recognized images to come out of Andrew. In the picture, a group of flamingos were huddled together in a restroom, staring at themselves in a mirror and in front of a row of sinks. The picture, some say, represented the absurdity and enormity of the storm and how off guard Andrew caught them.

This time around, preparations to protect the flamingos began much earlier.

Magill, now the zoo’s communication director, says it’s safer to keep the birds in Miami because Irma’s path has been so inconsistent. He says moving them could actually put them in more danger.