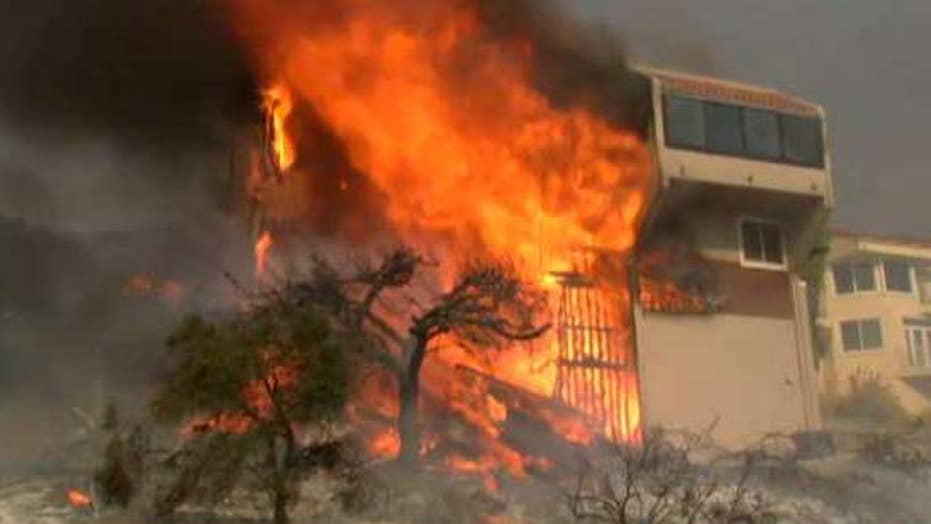 Firefighters race to save Christmas as wildfire claims home

It's a streak nobody wants to be in. Starting with the eclipse in August, it seemed like a breaking news story happened every day and I ended up at almost every single one.

From Clemson South Carolina, where watching the eclipse was more surreal than I had ever imagined, to then spending 9 days on the Florida Keys as Hurricane Irma came ashore wreaking massive destruction, I always have a camera at my side.

Priorities are always reporting live on television, but between those, we see and catch glimpses of history and humanity.

I ended up in Las Vegas covering the release of OJ. Simpson, only to end up one of the first reporters on scene for the horrific shooting at the country music festival.

The scene as police respond to the shooting outside a country music festival in Las Vegas. (Adam Housley)

Then after one day at home, I was in Northern California for the most destructive fire in California history. My hometown is wine country and watching the fires burn out of control for days and then envelop the valleys with smoke was heartbreaking.

Again after a short break, we rushed to Sutherland Springs Texas, a small town outside of San Antonio. I still can't understand the evil that must exist in someone to walk into a church and do what he did.

Crosses mark the number of victims in the shooting at a church in Sutherland Springs, Texas. (Adam Housley)

The photo that gets me is where I captured FBI agents on hands and knees in front of the church with the flag at half-staff, looking for any evidence and not wanting to miss one single inch.

Then it was the southern California fires. Again the winds blowing flames miles in some cases and the largest fire in state history, the Thomas Fire, ripping through the hillsides above Ventura California.

A firefighter works to douse flames from the Thomas Fire in Southern California. (Adam Housley)

The summer and fall and into winter of 2017 seemed to pass within a day. So many lives change forever, much of it preventable. These images are etched in my mind as are many others.