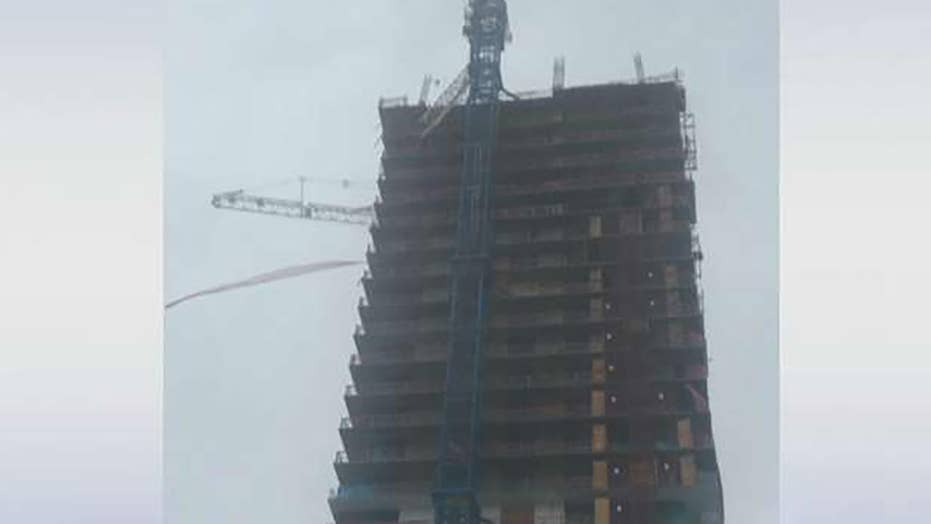 Miami might have avoided a direct hit by Hurricane Irma, but the city is still in the monster storm’s path with dangerous winds collapsing cranes, downing trees and creating catastrophic conditions for those left behind.

Among the biggest concerns are the city’s skyscrapers and high-rise condos. Though most were built after Hurricane Andrew tore up Miami in 1992 and designed using tougher standards than the towers before it, none of that mattered to people stuck inside as Irma blasted into the city.

I had thought the same thing a few hours earlier on the 38th floor of my hotel room overlooking Biscayne Bay.

At first, I thought I was mistaken and that my eyes and body were playing a joke on me. Nope. The building where I'm staying was actually swaying.

I immediately called my father, a retired architect, and though he reassured me, I was still a little queasy.

An hour earlier, a construction crane collapsed onto a nearby office building as Irma began to manhandle Miami. The boom of the crane snapped off and the last time I checked, it was still hanging off the side.

The arms of the tower cranes are left unlocked during massive storms – a move intended to decrease pressure on the arms. But it still creates unsafe situations as seen Sunday.

Watching Irma as it roared through Miami. (Fox News)

The City of Miami issued a statement saying it was contacting “neighboring building managers and residents to ensure their safety.”

Miami Mayor Tomas Regalado said Sunday he was relieved that the city seemed to have skirted a direct hit but added that he was still worried about a storm surge and flooding in the downtown area.

Irma already had created white caps at the mouth of the Miami River and earlier Sunday was responsible for tearing down stop signs and snapping trees. There also was a significant amount of debris flying in the road – which has become only worse with time.

The storm's effects as seen through a building's window. (Fox News)

Conditions made it difficult to stand up with winds whipping the area and the rain coming in sideways. Peak gusts – the kind that cause damage – were expected between 90-100 mph.

The Miami-Dade Police Department tweeted that its officers were sheltered and could not respond to calls for help. The department warned the city’s residents, “DO NOT venture out!”

Frustrated tourists who were lucky enough to still have power but were stuck in their hotels passed the time reading, watching movies and cursing their luck.

“We should have gone anywhere else,” Sergio Abrego said. “Four days of vacation. Four days inside.”

Others took it in stride.

“A lot of people have it a lot worse,” a mom staying at the Marriott Hotel explained to her three kids. All four were taking shelter in the hotel’s ballroom, which had been opened up for guests.