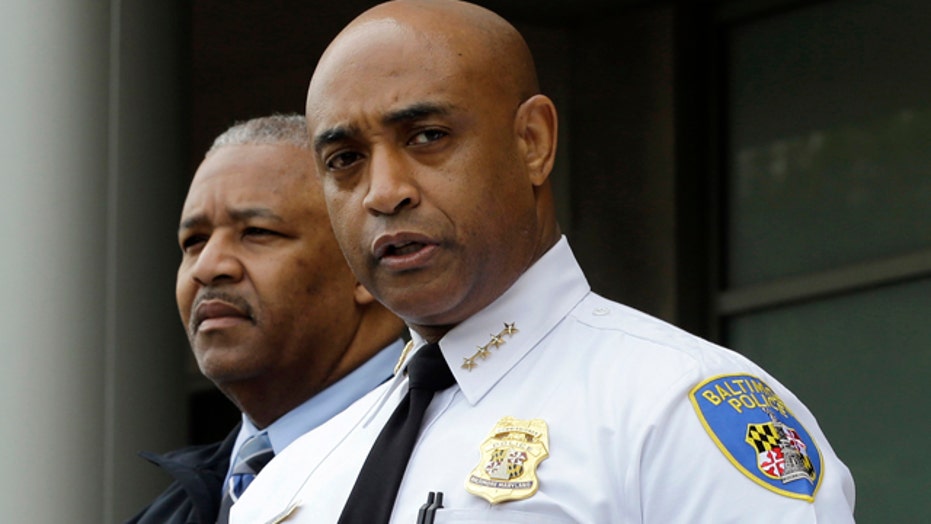 Sources told a Baltimore television station that the medical examiner found Freddie Gray died as a result of slamming his head against the inside of a police van, breaking his neck.

The local ABC affiliate WJLA reported sources said the medical examiner’s report, contained in the police report handed over Thursday to the state attorney, found Gray’s wound was consistent with the bolt inside the back of the police van.

Baltimore police said earlier Thursday their investigation into the events leading to the death of  Gray, the black man whose death in police custody sparked protests, rioting and looting, have been turned over to state officials.

Baltimore Police Commissioner Anthony Batts did not give details of the report or take questions, but did say some 30 detectives worked on the probe and that the police wagon Gray was being transferred in April 12 made a previously undisclosed stop. He shed little other light on the sequence of events leading up to the injuries that later proved fatal to Gray a week later.

Batts comments came hours after a Washington Post report claiming Gray may have intentionally tried to injure himself while in the police wagon. The Post cited an unidentified prisoner, who was also in the wagon but was separated from Gray by a metal partition and could not see him. The prisoner reportedly said he heard Gray "banging himself against the walls" and believed he "was intentionally trying to injure himself."

Batts did not mention the prisoner's statements, which were contained in an investigative document obtained by the Washington Post.

Authorities said Thursday the state's attorney's office will review the information, consider charges and decide how to move forward in the death of Gray.

At the same news conference, Deputy Commissioner Kevin Davis reviewed the timeline of Gray's time in custody and his death. Gray was arrested after he made eye contact with officers and ran. After a chase, officers pinned him down and handcuffed him. They loaded him into a van and put leg cuffs on him when officers said he became "irate" in the wagon.

Davis said Thursday that police discovered a new stop the van made with Gray in it, but they did not say what happened. Gray was eventually taken to a hospital. He died a week later.

On Wednesday, rumors circulated that some kind of "verdict" will be rendered when police handed their report to prosecutors. But Mayor Stephanie Rawlings-Blake and other officials worked to dispel that notion.

Hassan Murphy, a lawyer for Gray's family, underscored their comments, saying, "This family wants justice and they want justice that comes at the right time and not too soon."

Said Rawlings-Blake: "Whatever time the state's attorney's office needs to make that determination, the family wants to get it right."

In widespread protests Wednesday night -- not only in Baltimore, but in several cities including Boston, New York and Washington, D.C. -- it was clear that tensions over the case are far from subsiding.

While the demonstrations were mostly peaceful, police made numerous arrests, including 16 in Baltimore and at least 60 in New York.

Gray's death was the latest in a series of high-profile cases around the country in which black men have died as the result of encounters with police.

Similar protests have erupted over the deaths of Michael Brown in Ferguson, Missouri, and Eric Garner in New York last year, and the death earlier this month in South Carolina of Walter Scott. Scott was fatally shot in the back by a white police officer who has since been charged with murder.