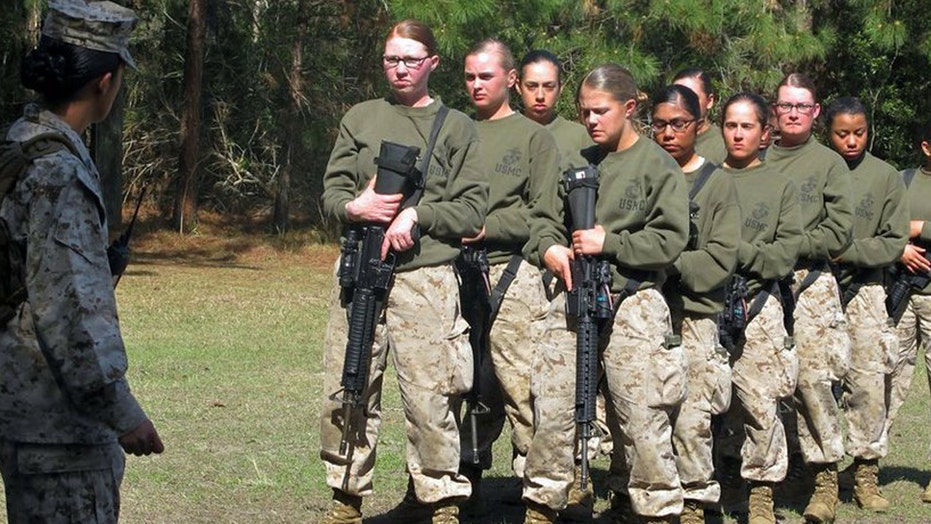 A report conducted by the U.S. Marine Corps on integrating women into all military units concluded that even the top female troops likely cannot cut it in the special operations forces -- even though they typically have better disciplinary records and perform better at problem solving.

A copy of the report, titled “United States Marine Corps Assessment of Women in Service Assignments,” was obtained by FoxNews.com. The 37-page document was prepared by a brigadier general for the USMC commandant ahead of the Jan. 1, 2016, deadline for implementation of full gender equality in every area of the military.

“The data in this report indicates that even striking what appears to be a balance for setting standards will likely introduce some level of risk across all of these factors,” the report by Brigadier Gen. George Smith concludes. “The recommendation to open or to request such an exception to policy for any MOS [Military Occupational Specialty] or unit will depend on the Marine Corps’ tolerance for the level of risk that such a change would impose.”

“The data in this report indicates that even striking what appears to be a balance for setting standards will likely introduce some level of risk across all of these factors.”

— Report by US Marines on integrating women into elite forces

The report is likely to fuel the rift between advocates of full integration, even in the military’s special operations forces units, and many present and former service personnel who have questioned the suitability of women to serve as absolute equals in the most elite combat units. Former Secretary of Defense Leon Panetta in 2013 ordered the Armed Services and U.S. Special Operations Command to integrate female service members into the remaining closed occupational specialties and units throughout the Department of Defense.

While highlighting the achievements of many outstanding female Marines, the report finds that overall elite female troops do not reach the same physical standards as their male counterparts. Smith notes that more than 400 women have received Combat Action Ribbons for service in Iraq and Afghanistan.

“There is no more compelling evidence that our female Marines have served very capably and courageously in combat and have distinguished themselves in non-linear, extremely complex operating environments,” the report states. “However, none of those rewards reflected a female Marine having to “locate, close with and destroy the enemy” in deliberate offensive combat operations. Rather, these actions were all in response to enemy action in the form of IED strikes, enemy attacks on convoys or bases or attacks on female Marines serving in the Lioness Program or on Female Engagement Teams.”

The report does note that female service members have better overall disciplinary records than men, and highlights that “in a decision-making study that we ran in which all male and integrated groups attempted to solve challenging field problems [that involved] varying levels of both physical and cognitive difficulty… the female integrated teams (with one female and three or four males) performed as well or better than the all-male teams.”

But “there were numerous indications of lower performance levels from combat arms females or female-integrated groups,” the report states.

The Marines report echoes the findings of the 1992 Presidential Commission on the Assignment of Women in the Armed Forces.

“Winning in war is often only a matter of inches, and unnecessary distraction or any dilution of the combat effectiveness puts the mission and lives in jeopardy,” that report stated. “Risking the lives of a military unit in combat to provide career opportunities or accommodate the personal desires or interests of an individual, or group of individuals, is more than bad military judgment. It is morally wrong.”

However, U.S. Navy Secretary Ray Mabus told NPR that studies showing women cannot keep up with men in certain areas could be flawed.

“It started out with a fairly large component of the men thinking this is not a good idea and women will never be able to do this,” he said. “When you start out with that mindset you're almost presupposing the outcome.”

One former U.S. Marine told FoxNews.com on condition of anonymity that full integration in all units could hurt morale if it is perceived as being done for political correctness and not merit.

“The Marines are being asked to treat female soldiers as absolute equals – in possibly life-threatening situations – even when every other measure has long ago proven that such physical equality between males and females does not exist,” he said.

Israel, which has long integrated women into its military, has reached similar conclusions regarding the most elite units, according to Lt. Col. Yuval Heled, the Israel Defence Force’s top military physiologist.

“Women in Israel and the U.S. do very good field operations,” Heled said. “But I would say that in the front line, with the potential of engaging in close combat, I would still recommend leaving things as they are.”