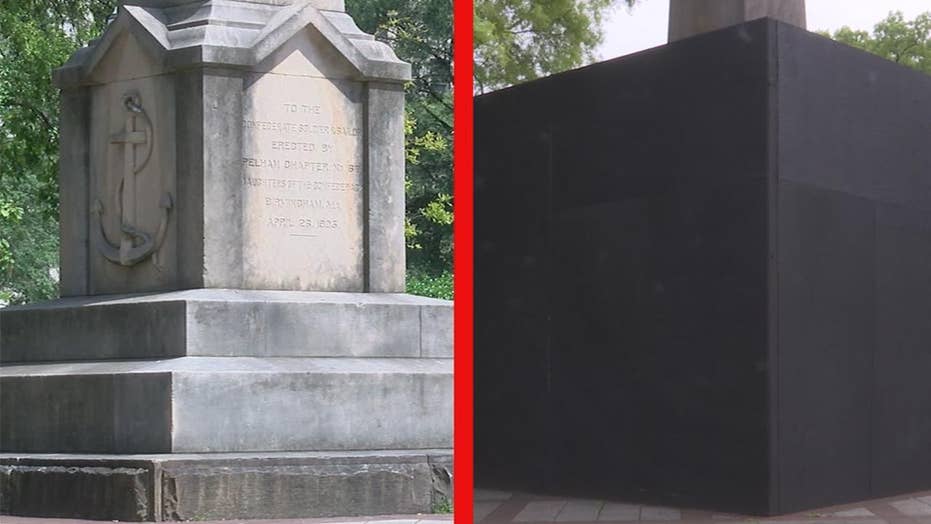 A wall that encircles a Confederate monument in Birmingham, Ala. has fueled a fiery legal dispute between the city and state.

BIRMINGHAM, Ala. – At 52 feet tall and more than 100 years old, Birmingham’s Confederate Soldiers and Sailors Monument stands at the center of a fiery legal dispute between the city and state.

During the recent debate over monuments honoring the Confederacy, critics called on the city to take it down – but Alabama state law prohibits the city from doing so.

Thus, Birmingham officials did what they thought was the next best thing – they erected slabs of plywood encircling the monument last summer, a wall tall enough to cover its inscription honoring Confederate soldiers.

That decision has sparked a year-long legal battle between the city and the state over whether obscuring the monument violates an Alabama law that seeks to protect the state’s Confederate monuments.

Hezekiah Jackson, president of the Metro Birmingham Chapter of the National Association for the Advancement of Colored People, applauded the implementation of the wall.

But the state’s response to Birmingham’s actions was swift and pointed. State officials sued the city, saying it was in clear violation of the Alabama Memorial Preservation Act, which prohibits the alteration of monuments that have stood for more than four decades.

“By building this barrier around the wall – it is clearly one that destroys the historic significance of the monument – the city violated that particular statue,” Attorney General Steve Marshall said.

The Birmingham monument, which sits in a park between City Hall and the Jefferson County Courthouse, was commissioned by the Pelham Chapter of the United Daughters of the Confederacy and dedicated in 1905.

“I think in public spaces there’s an opportunity for it to be skewed as to what exactly it represents,” Jackson said.

The governor is running for re-election, and this month released a campaign advertisement standing by her decision to back the law.

Former Birmingham Mayor William Bell ordered the wall’s construction just days before the Aug. 22 city council and mayoral elections, when he was defeated.

Marshall called the decision to erect a wall around the monument “a purely political act…attempting to curry favor during election season.”

Now, newly elected Mayor Randall Woodfin and the city are almost a year into a contentious legal dispute with the state over semantics – is concealing the monument equivalent to altering it?

“If you cover something, then that’s open to interpretation,” Jackson said. “Has [the monument] been actually altered because you just can’t see it?”

Dr. Pam King, an assistant professor at the University of Alabama Birmingham, said as a historic preservationist, she will always root for greater exposure of historical events – no matter how tragic. However, in this case, she thinks the courts will rule in favor of the city.

Alabama's Attorney General Steve Marshall visits the Confederate monument for the first time since the wall was constructed. (FOX NEWS)

“That’s a tough one,” King said. “I guess if I had to choose between the two interpretations, I would say it doesn’t alter the monument because it doesn’t, it just alters the ability to view it.”

Marshall called that argument a farce.

“Somebody who’s walking through Linn Park would have no idea why the monument is here, and that’s completely inappropriate under the law,” Marshall told Fox News.

“I treasure our history – good or bad,” Hightower said. “My daughter went to Auschwitz years ago, and it radically changed her life.”

King said the outcome of the case could have wide implications.

Birmingham will have to pay up if the ruling falls in the state’s favor. The Memorial Preservation Act imposes a $25,000 fine for violations, but the courts will have to interpret whether that’s for covering a monument, or for each day the cover remained in place.

If the court rules the city should be fined for each day it was in violation of the law, Birmingham will owe millions of dollars. But Marshall acknowledged the state likely would not charge the city such a hefty fee.

Should the judge rule in favor of the city, King predicted similar walls would start popping up around controversial monuments all across Alabama.