Josh Davis, a 36-year-old Red Sox fan, was brutally assaulted by whom he believes were a group of Dodgers fans after Boston won the World Series Sunday night in Los Angeles. (Josh Davis / Facebook)

Instead of celebrating Boston’s World Series Championship on Sunday, a Red Sox fan was recovering in a Los Angeles hospital after an alleged brutal attack by Dodgers fans following the win.

Josh Davis, 36, says he was stabbed five times with a screwdriver, had many of his teeth knocked out and his nose fractured in a brawl against as many as 10 Dodgers fans, Yahoo reported. He was first confronted by two men while walking home in Los Angeles’ Koreatown neighborhood Sunday night.

"Get your (expletive) out of here, this is Dodger country right here," one man allegedly said to Davis, who was sporting Red Sox gear. Davis recalled one of the men was wearing a Dodgers hat and jersey, New England Cable News reported.

Davis, a Massachusetts native who now lives in Los Angeles, wrote on Facebook on Wednesday that as the trash talk escalated, he “brawled” with the two men. When a third whistled for more help, Davis quickly found himself swarmed by a large group and “started to fear for my life.”

Davis gave an update on his condition, writing that he was “doing ok, just very sore.”

"It should never come to beating the crap out of people, you know what I mean?" Davis told NECN. "I got a lot of Dodger fan friends ... I'm not going to let one bad apple ruin it for me ... or ten."

"It should never come to beating the crap out of people, you know what I mean? I got a lot of Dodger fan friends ... I'm not going to let one bad apple ruin it for me ... or ten." 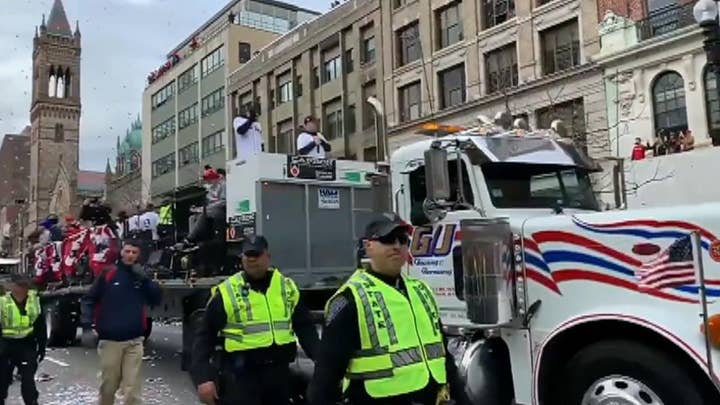 The Los Angeles Police Department is investigating the case as an assault with a deadly weapon and a robbery because Davis said his phone and wallet were stolen during the melee, the station reported.

The Red Sox beat the Dodgers 5-1 in Game 5 Sunday night for their ninth World Series championship.