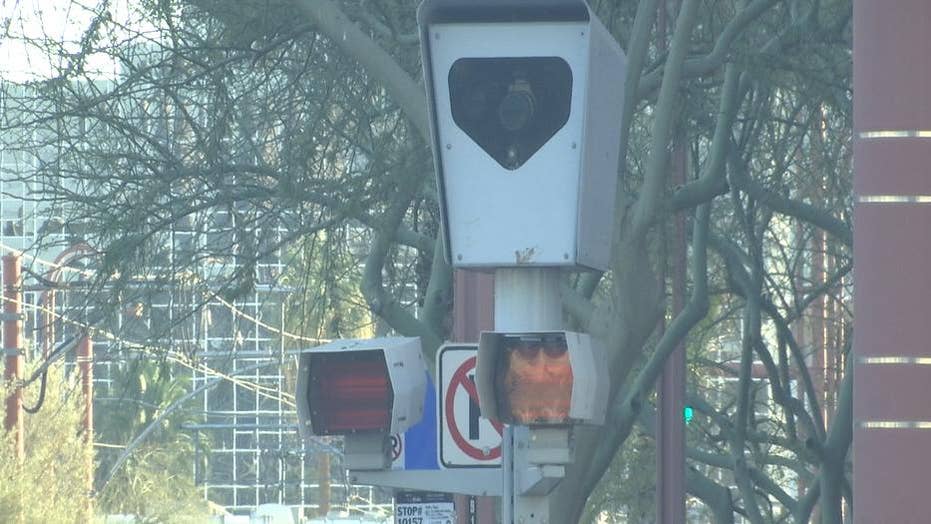 Camera enforcement on the roads is up for debate throughout the nation, whether it’s either safe or constitutional

Traffic stop law enforcement, in the form of photo enforcement, is at the center of a heated national debate – and it has both sides seeing red.

More than 500 communities in the U.S. have some type of red light or speed camera program to catch motorists who flout traffic laws. There are other municipalities who are either looking into starting to use them, or expanding their existing program.

But now, there are a growing number of areas who are starting to question whether the speed camera programs are effective. Critics even call them unconstitutional.

Seven states, including Arizona, are considering legislation to prohibit red light and speed camera use. They say those programs, which have grown in popularity the past few years, are ripe for abuse.

The way the red light cameras work are if someone is caught running a red light, the camera will snap a picture of the car and its driver. The accused will then receive a citation in the mail.

“I think everyone in the country should be concerned about this type of law enforcement action, especially when it’s so ripe with corruption,” said Arizona State Rep. Travis Grantham.

“I think everyone in the country should be concerned about this type of law enforcement action, especially when it’s so ripe with corruption.”

In one case in Arizona in 2016, a former traffic light enforcement camera vendor was sentenced to prison for bribery and fraud.

“The practice of privatizing law enforcement actions is just wrong,” Grantham said. “Every aspect of it is wrong. When you add the equation of for-profit into the mix, it presents a lot of opportunity for fraud, for abuse.”

More than 500 communities in the U.S. have some type of red light or speed camera program to catch motorists who flout traffic laws. (Fox News)

But those in favor of red light cameras say they save lives – and municipalities should be embracing them, not getting rid of them.

Barbara Hoffman, executive director of Red Means Stop Traffic Safety Alliance, joined the company after her son was killed at an intersection after a driver ran a red light.

She believes these cameras are important in helping law enforcement officers keep the streets safe.

“Since my son was killed by a red light runner, I thought if there was more of these, maybe less people would be running red lights,” Hoffman said.

The constitutionality of automated enforcement laws has been challenged in several cities but few challenges have been successful. The total number of camera programs, however, has declined since 2012 because many programs were discontinued. The main reasons for turning off cameras include a reduction in camera citations, difficulty paying for it and community opposition.

"I just don’t see why there’s a constitutional problem except if he’s saying the police ought to be more involved in the issuing (of) the tickets. That I think is a plausible constitutional question.”

Hoffman said the unconstitutional argument has not held up in court.

“I can name six courts that have actually gone through and proved that it wasn’t unconstitutional,” Hoffman said. “These judges all ruled against that. So, I believe the judges have enough to back that up. I don’t think Rep. Grantham has that knowledge to override a judge. And this is judges throughout the United States.”

Grantham’s bill would get rid of every one of the cameras in the state. It’s already passed through committee and up for vote on the state House floor.

“The way photo radar works, it really does not afford the person receiving the ticket the right to due process,” Grantham said. “That’s a huge problem.”

Paul Bender is a professor of constitutional law and dean emeritus at Sandra Day O’Connor College of Law at Arizona State University. He’s argued a number of cases about the Constitution in courts, including the Supreme Court. He said the red light cameras are constitutionally sound – but having non-law enforcement officials issuing traffic tickets could be a problem.

“You’re allowed to enforce criminal law in a way that’s efficient and this is just a way that it’s efficient. So, I just don’t see why there’s a constitutional problem,” Bender said, “except if he’s saying the police ought to be more involved in the issuing the tickets. That, I think, is a plausible constitutional question.”

Bender said the “government should not contract out things that it has the responsibility for.” But, he added, that can easily be resolved by having a police officer involved.

Along with the constitutional debate, there’s the big question of what makes intersections safer. Studies support both sides of the debate.

Studies in Oxnard, Calif., and Fairfax, Va., reported reductions in red-light violation rates of about 40 percent after the introduction of red-light cameras. Some studies have shown that while red-light cameras reduce front-into-side collisions and overall injury crashes, they can increase rear-end crashes. But such crashes tend to be much less severe than front-into-side crashes, so the net effect is said to be positive, studies show.

“Since my son was killed by a red light runner, I thought if there was more of these, maybe less people would be running red lights.”

“Any kind of help that can stop people from running red lights, to me, is a benefit because I would hate to see another mother or another family lose a loved one just because of selfishness and people being in a hurry and thinking they can get away with it,” Hoffman said.

Plus, Bender said, there is little room to dispute a camera proving that someone broke the law.

“I don’t think you have a right (to evade the law). As long as it’s done properly and fairly, it’s OK to enforce the law,” Bender said. “I think cameras are probably fairer overall than individual police officers.”

But Grantham said the third-party companies are holding too much data about motorists and should not be upholding laws.

“We start infringing on people’s constitutional rights and we start privatizing law enforcement to the point where you could be issued a fine,” he said, “you could potentially have your driving privileges revoked when a private corporation, who’s really going unchecked by many law enforcement in many instances, is able to just issue these tickets, [program the equipment that has used these tickets, harvest your data, distribute your data for whatever purposes they see necessary, it’s very problematic.”