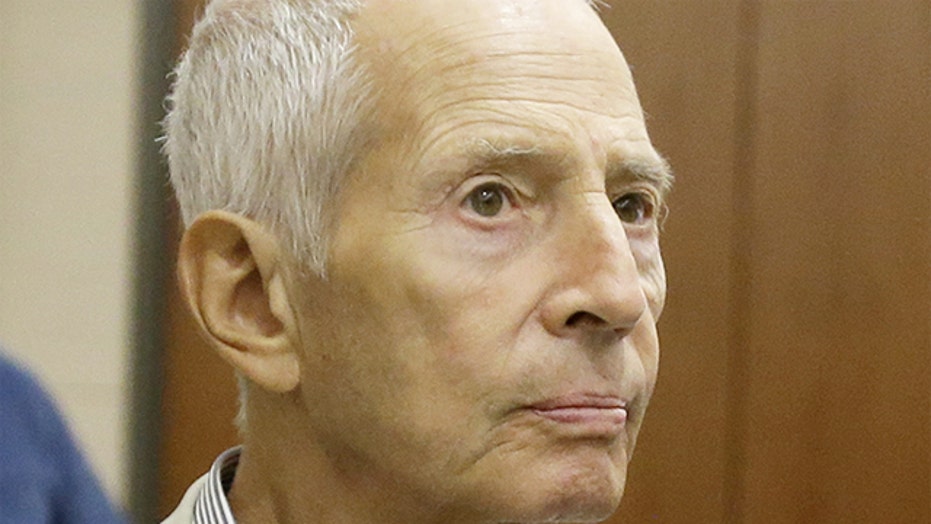 Thanks to HBO documentary he agreed to cooperate with, real estate heir and longtime suspect could face charges in two unsolved murder cases

Real estate heir Robert Durst was charged Monday afternoon with the 2000 murder of a friend, one day after the airing of a TV documentary in which he seemed to confess to the crime.

Durst, 71, was charged with one count of first-degree murder, the Los Angeles District Attorney's office said. He was being held without bail in New Orleans after being arrested on Saturday. Earlier Monday, Durst made a court appearance and waived extradition to California.

If convicted, he faces the death penalty.

Durst has long been eyed in Susan Berman's death, as well as the disappearances or deaths of two other people.

Sunday night, HBO concluded a documentary entitled "The Jinx: The Life and Deaths of Robert Durst," in which Durst, after an interview with filmmaker Andrew Jarecki, goes into a bathroom still wearing a wireless microphone.

"What the hell did I do? Killed them all, of course," he can be heard muttering.

The program did not make clear whether the film's producers confronted Durst about his words, but The New York Times reported that more than two years passed before the filmmakers found the audio. Legal experts say the bathroom tape could become key evidence.

He was taken into custody by FBI agents at a J.W. Marriott hotel for the 2000 murder of  Berman in her Beverly Hills, Calif., home. A police report said Durst was in possession of a revolver when arrested.

He had been laying low in the hotel to avoid the growing attention at his Houston home, his lawyer said.

Durst was also charged Monday with being a felon in possession of a firearm and possession of a firearm in the presence of a controlled dangerous substance after he was found allegedly having a small amount of marijuana on him, the Louisiana State Police said. A hearing will be scheduled by the Orleans Parish District Attorney's office.

Jarecki told ABC's "Good Morning America" on Monday that he didn't notice the bathroom audio right away because it was a small film crew. It wasn't until later, when they brought on more editors, that one of them heard it.

Earlier in the episode, the filmmakers had confronted Durst with similarities between an envelope he had sent to Berman the year before she was killed and an anonymous letter to Beverly Hills Police around the time of her death warning them that they would find "a cadaver" in Berman's home. Both letters were written in block handwriting and the writer misspelled Beverly Hills as "Beverley" on both occasions.

In the documentary, Durst admitted addressing the earlier envelope to Berman, but denied writing to the police at the time of her death. Jarecki then presented Durst with enlarged versions of the misspelled "Beverley" from each envelope.

"Can you tell me which one you didn't write?" Jarecki asked. Durst admitted that he could not.

The Los Angeles Police Department said that they charged Durst "as a result of investigative leads and additional evidence that has come to light in the past year. The Los Angeles Times reported that the documentary had played a role in the decision to arrest Durst on Saturday, though authorities did not say specifically what evidence enabled them to charge Durst with murder.

"He's maintained his innocence for years," said his lawyer, Chip Lewis. "Nothing has changed." Lewis added that he has no doubt the timing of the arrest was orchestrated in coordination with HBO's broadcast of the final episode. Neither LAPD nor the movie's producers would comment on that claim.

"We simply cannot say enough about the brilliant job that Andrew Jarecki and Marc Smerling did in producing The Jinx," HBO said in a statement Sunday. "Years in the making, their thorough research and dogged reporting reignited interest in Robert Durst's story with the public and law enforcement."

Durst's estranged family thanked authorities for tracking him down.

"We are relieved and also grateful to everyone who assisted in the arrest of Robert Durst. We hope he will finally be held accountable for all he has done," said his brother, Douglas Durst, in a statement.

Berman was a writer whose father had been a known associate of Las Vegas mobsters Bugsy Siegel and Meyer Lansky. She became a spokeswoman for Durst following the disappearance of his wife, Kathie, in 1982. In that case, Durst told investigators at the time that he last saw his wife when he dropped her off at a train station in Westchester County.

Berman, 55, was killed execution-style two days before Christmas in 2000. Her murder came just as police were about to interview Berman about Kathie Durst's disappearance.

Durst also made headlines in 2003, when he was acquitted in the murder of Morris Black, whose dismembered body was found stuffed in plastic garbage bags in Galveston Bay, Texas, two years earlier. Durst admitted he dismembered Black’s body, but was acquitted after claiming self-defense.

Late Sunday, former Galveston County District Court Judge Susan Criss, who presided over that trial, told The Washington Post it was "like watching a slow train wreck. The prosecution dropped the ball in every way and the defense came prepared." Criss described Durst as calm and occasionally charming during the proceeding, but told the Post that she believes him to be a serial killer.

"I saw the pictures of [Black's] cut up body," Criss said. "That body was cut up like it had been done by a surgeon. He knew what sort of tool to use for this bone and that muscle. It would have been impossible for someone to do that if it was their first murder attempt. That is a cold, calculating act."

Before being tried for Black's murder, Durst jumped a $1 billion bond. However, he was caught in Pennsylvania weeks later after shoplifting a sandwich and Band-Aids.

In 2014, Durst was arrested for urinating on a drug store candy display near his home in southwest Houston. He was charged with criminal mischief after urinating on at least $100 worth of confectionary, authorities said at the time.

The oldest son of the late real estate mogul Seymour Durst, whose Durst Corporation manages 1 World Trade Center, Robert Durst became estranged from his family when his brother Douglas was chosen instead of him to run the family business.

Robert Durst had known tragedy from an early age -- he said that when he was seven, his mother committed suicide by jumping off a building.

"The story is so operatic," Jarecki told the AP before his documentary aired.