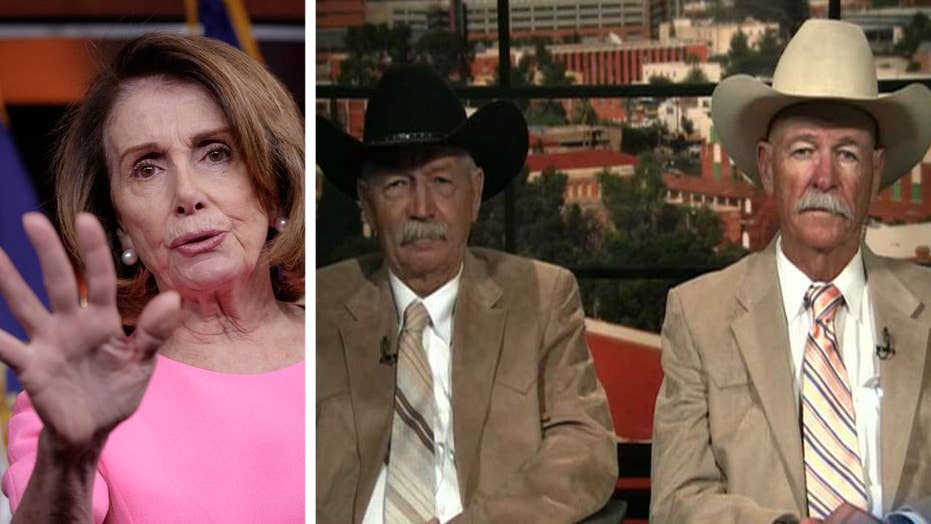 Ranchers living on the border fire back at Nancy Pelosi

For the past three decades, U.S. Border Patrol officers have caught about 50 illegal immigrants per day trying to sneak across the 16,000 acres of land abutting Mexico that’s owned by Arizona rancher John Ladd.

Since President Trump took office and made border security a priority, however, that flood of illegals has slowed to a trickle.

“It’s [down] 90 percent, 95 percent,” Ladd told “Fox & Friends” on Tuesday. “We have a wall that’s existing on our ranch since 2006, and they’re replacing that with an 18-foot Ballard fence, steel tubing, concrete. And with that activity, it’s almost non-existent to see an illegal anymore.”

“The wall is, in my view, immoral, expensive, unwise,” Pelosi said on “Meet The Press.” “And when the president says, ‘Well, I promised a wall during my campaign,’ I don’t think he said he was going to pass billions of dollars of cost of the wall on to the taxpayer.”

Ladd and Davis – who’ve invited Pelosi to their property with no luck – disagree.

“You know she talks about splitting the community up, all the communities that I know about, all of the cities along the border already have high fences,” Davis said. “Where the wall is necessary is in a lot of the outlying areas where you still only have a four-wire barbed wire fence between Mexico and us.”

He added: “The wall itself is just a tool in the kit, but you’ve gotta put boots on the ground to go with it to make it effective. And that’s been part of the problem in places they have a wall now.”