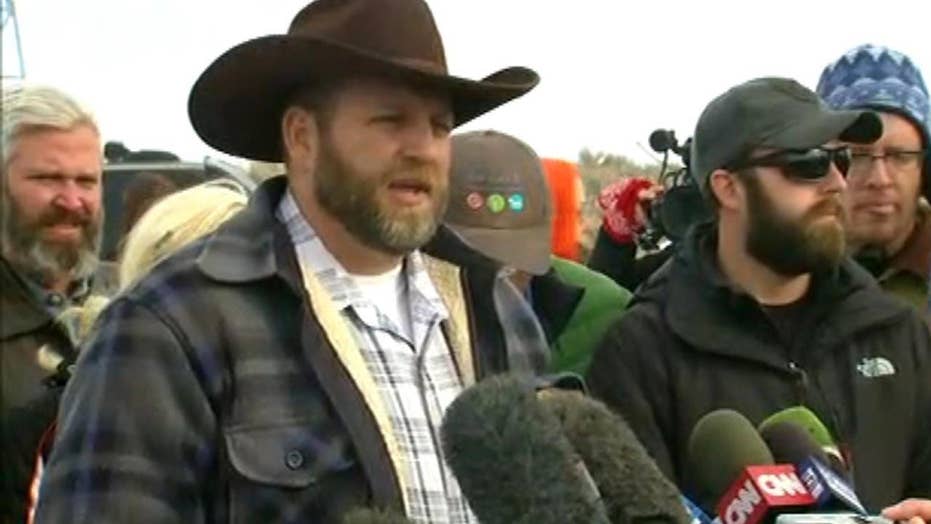 Danny Coulson: 'These are regular individuals'

As armed protesters occupied buildings on a federal wildlife preserve in Oregon Monday, the father and son whose cause they claimed to embrace turned themselves in to police in California.

On Sunday, Dwight Hammond, 73, and his son, Steve, 46, embarked on their road trip across their home state, took a flight to Los Angeles and then traveled some 25 miles south to Terminal Island Federal Correctional Institution, in San Pedro, Calif., where they will finish their prison sentences.

“I wouldn’t say I was grateful. But maybe there is the capability of doing some kind of change that might make life worth living for us again.”

The Hammond family has “run out of hope” that the siege by self-professed patriots some 70 miles from their home in rural Oregon will change things.

“Our government is so broken,” family matriarch Suzie Hammond told FoxNews.com of their ongoing legal battle. “We can’t keep fighting the government – for decades this fight has disrupted our lives, our ranch operation.”

While deeply upset over their situation, Suzie Hammond stopped short of supporting the armed takeover of the Malheur National Wildlife Refuge, south of Burns. More than 100 protesters moved into the site on Saturday after participating in a peaceful rally in Burns on behalf of the Hammonds.

Suzie Hammond, reached at her home in the Oregon wilderness, said her family had no role in the planning or execution of the standoff and said she has no intention of visiting. The standoff is being led by Ammon Bundy – whom the Hammonds have met previously – and his brother Ryan Bundy, sons of rancher Cliven Bundy who had his own armed standoff with the Bureau of Land Management (BLM) in Nevada in 2014.

“I wouldn’t say I was grateful,” Hammond said when asked about the protesters’ bid to draw attention to their plight. “But maybe there is the capability of doing some kind of change that might make life worth living for us again. Soon, there will be no ranchers left.”

A longtime friend and neighbor of the Hammonds, Ruth Danielsen, told FoxNews.com that the Bundy brothers didn’t want the Hammonds to turn themselves in. But Danielson said the father-son rancher duo is hardly the image of angry domestic terrorists, despite being charged under such laws.

“They are the nicest humans you would ever want to meet, very polite, salt-of-the-earth types,” Danielsen said. “They are always giving hay away to other ranchers who need it and donating money to local schools and charities, really nice people. Not the people the government should be going after.”

A legal team for the Hammonds insisted in a statement released Monday that Dwight and Steve “respect the rule of law.”

“They have litigated this matter within the federal courts for over five years and, in every instance, have followed the order of the court without incident or violation. That includes serving the entire sentences imposed in this case by the judge who heard the evidence at trial and who concluded that imposition of a five-year sentence under these circumstances would ‘shock the conscience,’” read the statement.

The legal team plans to seek executive clemency from the Obama administration.

For the Hammonds, clashes with federal authorities in courtrooms and in the wild over farming and property rights are all too familiar. In the early 1970s, Dwight Hammond sued the U.S. Fish and Wildlife Service for water rights to fill his reservoir and won. In 1994, the agency tried to fence off a cattle trail that Hammond used that traversed federal land. Once again, Hammond sued and won.

“Then the BLM began secretly gathering ‘stuff’ against the Hammonds accusing them of arson, conspiracy, flying in restricted airspace, etc.,” Danielsen said.

According to an NPR report, Dwight Hammond was alleged to have made death threats against federal officials. In 2010 a federal grand jury indicted Dwight and his son Steve on 19 counts, including conspiracy to commit arson, for multiple wildfires in the Steens Mountain area. These charges of arson went all the way back to the early 80s – a span of over 25 years.

“If it was arson, why did they wait?” Danielsen noted.

In 2011 a new federal prosecutor was named and 10 of the original 19 count indictments were dropped, leaving nine counts spanning 15 years. The BLM and federal prosecutor decided to charge the Hammonds with an arson charge connected with the Antiterrorism and Effective Death Penalty Act of 1996. A jury found Dwight Hammond guilty of one of the nine counts, and Steve Hammond guilty of two of the nine counts -- the two fires the Hammonds admitted to starting.

One was a prescribed burn on Hammond property that got away from them and burned 139 acres of adjacent BLM land. The other was in response to a lightning-caused fire, what is known as a "back burn," which was started on Hammond property and burned an acre of BLM land.  At the time, the Hammonds claimed the fires were lit to reduce the growth of invasive plants and protect their property from wildfires, but prosecutors argued it was to cover-up poaching.

“Neither of these fires would be considered ‘terrorism arson’ or even arson by a reasonable human. In fact they are standard range land management practices,” Danielsen argued.

But based on the Antiterrorism Act, Congress set the minimum sentence for a fire on federal property at five to 20 years. The prosecutor requested five years for each count, but a federal judge called the penalty “grossly disproportionate to the crimes” and used the Eighth Amendment as justification for the lighter sentence. Dwight Hammond served three months in prison and Steve Hammond served one year.

On appeal by the government, the 9th Circuit Court of Appeals overruled the lower court, saying there was no discretion to lessen the sentences.

The BLM denied all of the Hammonds' grazing permits in 2014, using the justification that arsonists are not good stewards of the land, and lawyers for the family stated that they continue to fight for the permits to be issued.

To ranchers in the West, the dispute is just the latest in a long line of cases in which they allege the government has used its control over grazing and right-of-way permits to undermine their way of life.

The animosity has increased as the federal government buys up more and more land in western states. In the dangerously dry sector of eastern Oregon where the Hammonds purchased their property more than 50 years ago, some counties are up to 90 percent federally owned, leaving ranchers reliant on government grazing leases for their livelihoods. In the 1970s, ranchers in the region instigated the “Sagebrush Rebellion” in an effort to ascertain public land, but the government continues to prevail.

The FBI has called for a “peaceful resolution” to end the siege at the national wildlife refuge, but over the weekend the Bundy brothers vowed to continue their stand as pickup trucks blocked the building entrance and protesters stood in their camouflage attire and winter clothing.

“The end goal here is that we are here to restore the rights to the people here so that they can use the land and resources,” Ryan Bundy said, while Ammon Bundy cautioned that if the government opted for more violent measures to end the standoff they would be “putting their lives at risk.”

The BLM did not immediately respond to a request for comment, but on its Facebook page stated that the offices in Oregon are “closed until further notice.”