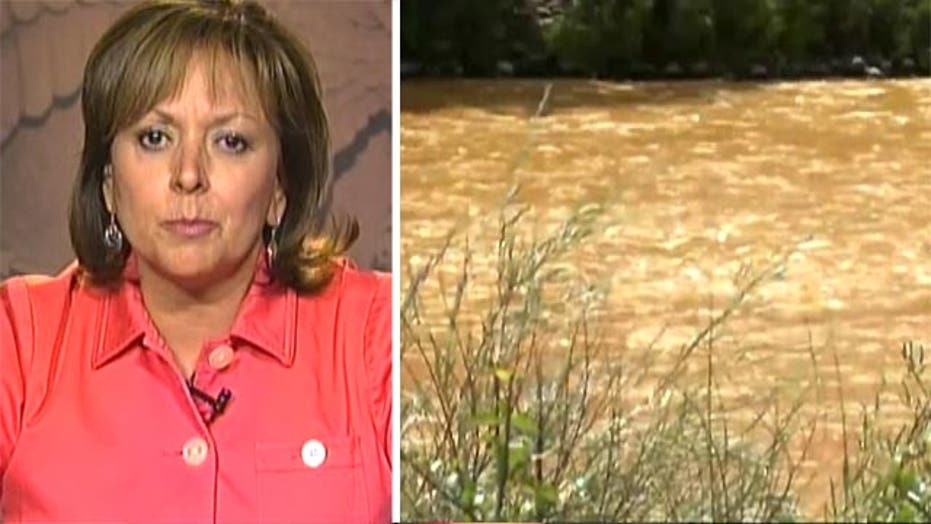 Is the EPA still not being forthcoming about toxic spill?

New Mexico Gov. Susana Martinez sounds off on the EPA's handling of their dangerous botched clean-up that has impacted three states

The mistrust Native Americans have long harbored toward the federal government has gone to another level in Navajo territory land, where residents angrily scoff at the Environmental Protection Agency's assurances its accidental mining spill won't foul the key San Juan River floodplain they depend on for their lives and livelihoods.

EPA Secretary Gina McCarthy rushed to the region this week in the wake of the spill at the defunct Gold King Mine near Durango, Colo., to announce that the river system that includes Cement Creek and the Animas, San Juan and Colorado rivers will not be seriously impacted by a spill of 3 million gallons of mining wastewater laden with heavy metals. But McCarthy's claim that ecosystem was "restoring itself" did not convince Navajo leaders.

Begaye, whose nation's reservation includes a large cluster along the banks of New Mexico's San Juan River, urged his people not to quickly sign government reimbursement Standard Form 95, an application for payment of losses incurred, as it could limit future legal options. Many Navajo don't have running water, and collect treated water at various distribution points along the river and use untreated water for irrigating crops and sustaining livestock.

"The sludge has now entered the waters of the Navajo Nation, and the Navajo people along the San Juan River now have uncertain access to clean water to drink, water for their sheep and cattle and water to irrigate their fields."

The Navajo reservation occupies more than 27,000 square miles, straddling parts of northeastern Arizona, southeastern Utah and northwestern New Mexico. Begaye fears contamination from the 3-million-gallon spill could have long-term repercussions for his members, particularly those along the San Juan.

"The scope of contaminants in the Nation's waters remains unknown, but U.S. EPA has warned counties, cities, municipalities and the Navajo Nation to stay away from the water and to stop any diversion of the San Juan River," Begaye wrote in a statement to his tribe. "The sludge has now entered the waters of the Navajo Nation, and the Navajo people along the San Juan River now have uncertain access to clean water to drink, water for their sheep and cattle and water to irrigate their fields."

The Navajo, historically an agricultural and livestock-based culture, could be crippled by contamination of the river. Navajo farmer Wanda Benally put the blame squarely on the EPA.

The San Juan River flows through the Navajo Reservation as a cow grazes alongside a field that uses river water for irrigation, Wednesday, Aug. 12, 2015, in Shiprock, NM. (AP Photo/Matt York)

"The farm has been in the family since the early 1900s," Benally told KOB News in Albuquerque. "It started with my grandfather. It has been disrupted. This so-called EPA…I'm very frustrated. I'm very hurt."

Local farmers have been able to rely on the remnants of a robust monsoon season, but with a week of temperatures in the low to mid-90s, the soil is rapidly drying. Leo Watchman, manager of the Navajo Nation's Department of Agriculture, said he is seeing an increasing level of frustration among farmers and ranchers who are not satisfied not only with the slow response of the EPA but what they are being told.

"The lack of response and a plan are adding to the frustration," Watchman said.

Watchman said some farmers are receiving alternate forms of irrigation but the nation's president is still concerned.

Russell Begaye, president of the Navajo Nation, urged members not to take a quick settlement from the government as the nation's largest tribe considers legal action. (AP)

"The Nation's public water reserve is quickly depleting and our people will no longer have access to water within a few weeks," Begaye said in the order.

McCarthy said  $500,000 has been made available to provide irrigation resources for farms and water for livestock in the affected region.

Rex Kontz, deputy general manager for the Navajo Tribal Utility Authority said things might be different if a proposed water treatment, planned for the nearby Shiprock, N.M., area, was on line. But costly mandates from the EPA drove the project's cost above $20 million, and the plans remain on the drawing board. The expansive 27,000 square mile reservation, has only one water treatment plant and that only serves the small community of Mexican Hat, Utah.

New Mexico Governor Susana Martinez said Friday she is looking to put a team together to study the long-term impact of the toxic spill on the river.

Associated Press contributed to this story