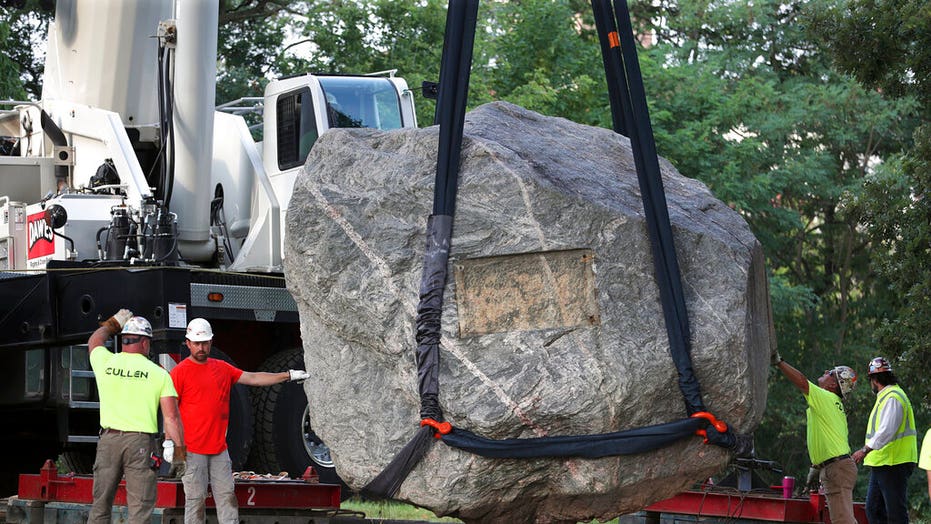 The University of Wisconsin removed a controversial boulder from its Madison campus Friday after the Black Student Union and other activists objected to its description nearly 100 years ago with a racial slur.

Chamberlin Rock, which rests atop Observatory Hill, is named after a 19th Century geologist and former university president, Thomas Crowder Chamberlin, whose work centered on glacial deposits, according to a bio on the university’s website.

But it was a reporter’s reference to the rock in a nearly century-old Wisconsin State Journal article that prompted the push for its removal.

Crews work to remove Chamberlin Rock from Observatory Hill on UW-Madison campus in Madison, Wis., Friday, Aug. 6, 2021. The University of Wisconsin is removing the 70-ton boulder from its Madison campus at the request of minority students who view the rock as a symbol of racism. Chamberlin Rock, on the top of Observatory Hill, is named after Thomas Crowder Chamberlin, a geologist and former university president.     (Kayla Wolf/Wisconsin State Journal via AP)

In October 1925, the university had the boulder excavated and placed prominently atop the hill to honor Chamberlin, who would die in Chicago three years later. The rock was a rare specimen believed to be more than 2 billion years old, and before it was installed on Observatory Hill, only about a foot and a half was visible above ground, according to the article. It was believed to have been carried by glaciers from Canada to Wisconsin.

In the 1920s, a slang term used to describe large dark rocks included the N-word, and it appears in coverage of the rock’s installation.

University researchers did not uncover other instances in print where the rock was referred to with this word, but they said the Ku Klux Klan was active on campus at the time of the rock’s dedication, according to an article in the same newspaper published earlier this week.

A flatbed trailer pull away from Observatory Hill with Chamberlin Rock in tow in Madison, Wis., Friday, Aug. 6, 2021.  The University of Wisconsin is removing the 70-ton boulder from its Madison campus at the request of minority students who view the rock as a symbol of racism. Chamberlin Rock, on the top of Observatory Hill, is named after Thomas Crowder Chamberlin, a geologist and former university president.     (Kayla Wolf/Wisconsin State Journal via AP)

Juliana Bennett, a senior and a campus representative on the Madison City Council, said removing the rock signaled a small step toward a more inclusive school.

"This moment is about the students, past and present, that relentlessly advocated for the removal of this racist monument," she told the Associated Press. "Now is a moment for all of us BIPOC students to breathe a sigh of relief, to be proud of our endurance, and to begin healing."

University Chancellor Rebecca Blank approved Chamberlin Rock’s removal back in January, but the school also needed approval from the Wisconsin Historical Society because the boulder sat within just 15 feet of a Native American burial site.

Chamberlin will get a new plaque in a building already named after him, and the boulder will find a new home near Lake Kegonsa on other university-owned land.

Student groups had also demanded the removal of an Abraham Lincoln statue from campus – but university leaders rejected that request.