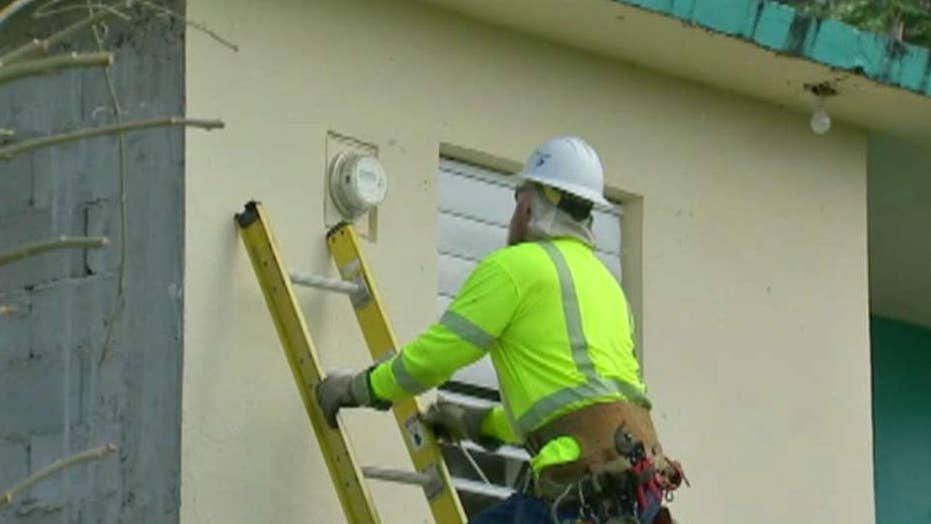 Power coming back on in homes six months after the storm hit the island; Bryan Llenas reports from Puerto Rico.

Six months after Hurricane Maria made landfall in Puerto Rico, about 100,000 Americans on the island are still without power, thousands of blue tarps cover damaged roofs on homes, and over 130,000 Puerto Ricans have moved away.

“We’re at a fragile stability right now,” Michael Byrne, Puerto Rico’s federal coordinating officer for Federal Emergency Management Agency, told Fox News. “I’m sorry to have to say this but we’re still delivering food and water to some neighborhoods…we still have a lot of work to do as we move into the longer-term recovery.”

On Monday alone, FEMA delivered 94,000 liters of water and 50,000 meals. The federal relief effort is almost out of phase one, power restoration and aid, and trying to progress into phase two, housing rebuilding efforts and long-term construction. While 93 percent of the island is no longer in the dark, crews are still trying to restore power in mountainous barrios, or neighborhoods, especially along the hardest hit southeastern region of the island. In fact, three FEMA generators are still providing power to the island’s electric grid.

In Naguabo, Jose Martinez has been without power for six months. For the first three months, Martinez and his family took baths using an industrial bucket. They waited in long lines for food. Exasperating the situation – the family took turns carrying and taking care of his wife’s 82-year-old father, who was bedridden because of Alzheimer’s and Parkinson’s disease.

“I tell you what, it’s so hard,” he said with tears in his eyes. “I was depressed for four days and my wife was as well because we had our hands tied. You can do nothing.”

On Sunday, Martinez’s lights finally came on. His home was a shelter for a dozen family members and friends during the last six months, each sharing supplies and food. They cheered as they anxiously watched AEP power crews from Ohio and Texas light up their block of about two dozen homes.

“I feel so happy,” Martinez said. “I was here for Hurricane George. That was hard, too, but Maria… it was a demon man, it was a demon.”

There are currently about 1,500 private utility workers on the island from 56 private utility companies all across the country, according to the Edison Electric Institute, which is coordinating the effort. The workers have been traveling to Puerto Rico to work 30-day stretches and 16-hour days.

The 75 linemen from DTE Energy in Michigan have been met with cheers and meals. Everywhere they go, people who have little and have been in the dark for six months cook for them. The crews have used their own money to buy bicycles for kids and lights to put up at the local baseball field.

“To be this resilient for six, seven months and then to be just grateful we’re here…we talk about it every night, some of the guys may say that they are rough tough linemen, but some of them go back to their rooms and cry,” said John Wagner, General Supervisor for DTE Energy.

There are currently about 1,500 private utility workers on the island from 56 private utility companies all across the country, according to the Edison Electric Institute, which is coordinating the effort. The workers have been traveling to Puerto Rico to work 30-day stretches and 16-hour days. (AP)

For many though, six months of no work and no power has forced them to leave Puerto Rico for good. More than 135,000 people have fled to the U.S. mainland, according to an estimate by Center for Puerto Rican Studies at Hunter College in New York. On the mainland, nearly 7,000 families are in hotels and motels after FEMA extended the temporary shelter deadline until May.

Roberto Martinez, 56, lost the roof of his home in Yabucoa, where Hurricane Maria made landfall. He is taking his wife of 31 years and their 27-year-old daughter to Indiana this summer. The craftsman made a living creating custom doors and windows but over the last six months he hasn’t been able to afford the generator or the gas to power up his tools. Martinez is leaving behind his 94-year-old mother and five siblings.

“To have to abandon my grandmother, abandon my mother, my family after all these years together and to have make a decision like this now…it’s difficult,” Martinez said. “I have to have faith that I can do the work to lift my family up.”

Six months after Hurricane Maria made landfall in Puerto Rico, about 100,000 Americans on the island are still without power on the island. (REUTERS)

They are not alone, however. His wife, Awellda Ortiz, said she personally knows 30 people who have left since the storm. The family’s church of 400 has lost 25 percent of its parishioners.

Back in San Juan, Puerto Rico’s Governor Ricardo Roselló oversees the recovery efforts as tourists trickle back into the capital. At least 15 hotels are still closed and those open are overpopulated with recovery teams. Cab drivers told Fox News they are making about a third of what they made before the storm.

“It’s going up but it’s still not at normal levels,” Roselló said. “Our expectation is that by summer air travel will be sustained to levels previous to the storm. The cruise liners have been starting to roll up.”

Families cheer after their power is restored six months after the devastating hurricane. For many though, six months of no work and no power has forced them to leave Puerto Rico for good. More than 135,000 people have fled to the U.S. mainland, according to an estimate by Center for Puerto Rican Studies at Hunter College in New York. On the mainland, nearly 7,000 families are in hotels and motels after FEMA extended the temporary shelter deadline until May. (Fox News)

Roselló told Fox News he wants to completely revamp and privatize PREPA, the government-owned utility company, which he blames for a woefully antiquated energy system. The governor continues to be frustrated by what he says is the lack of urgency from Washington D.C.

Puerto Rico asked for $90 billion in aid. Congress appropriated $23 billion of that request but only about $1.27 billion has made its way to the island so far. The governor wants Congress to release the funds now, emphasizing that not one dollar has been spent on permanent public works projects.

“We are being treated like second-class citizens,” Rosello said. “You’re talking about Puerto Rico that’s in fiscal distress, and on top of that we are waiting four months to get money when it took one or two weeks in Texas and Florida.”

Recovery continues on the island, even as residents are mindful that hurricane season begins again in less than three months.

“My biggest petition right now is – let’s just get service to the people,” the governor said. “Let’s rebuild what needs to be rebuilt, to be resilient and prepare for the next storm season.”