Attorney Michael Avenatti, who was arrested Tuesday, is being accused of orchestrating several schemes to hide his assets from creditors and continue to live a lavish lifestyle – including residing in an $11,000-a-month apartment, being chauffeured in a Mercedes and staying in luxury resorts – despite debts surpassing $10 million.

IRS agents arrested Avenatti on suspicion of violating his bail in a California case by committing a series of state and federal crimes while awaiting trial there and in New York, U.S. prosecutors revealed in court documents Wednesday.

He was taken into custody in Los Angeles during a break in a California Bar disciplinary hearing over allegations that the high-profile lawyer scammed a client out of $840,000.

"Defendant’s extensive pattern of criminal conduct and the overwhelming evidence supporting those charges demonstrate that defendant is a substantial danger to the community,” wrote the prosecutors, who said they wanted Avenatti’s bail revoked. “If allowed to remain on bond, defendant will almost certainly continue to engage in further fraudulent and obstructive conduct.”

The documents unsealed in California Wednesday said there was probable cause to believe Avenatti – while out on pre-trial release – committed federal offenses such as mail and wire fraud, and state offenses including money laundering and fraudulent removal of property.

The documents showed that in May, Avenatti “arranged for his ex-wife... to purchase a $50,000 Mercedes Benz in her name that defendant and defendant’s personal driver, J.C., repeatedly used to transport defendant.”

“Additionally, between June 2019 and September 2019, defendant ‘flipped’ cashier’s checks to himself in order to limit the amount of funds available in his U.S. Bank account on at least eight separate occasions,” the documents added. “By doing so, defendant was clearly attempting to limit his creditors’ ability to levy his accounts and recover the debts defendant owed to his creditors.”

“Completely innocent,” he said as he was being led out of a courthouse following his arrest Tuesday night, the Daily Beast reported. 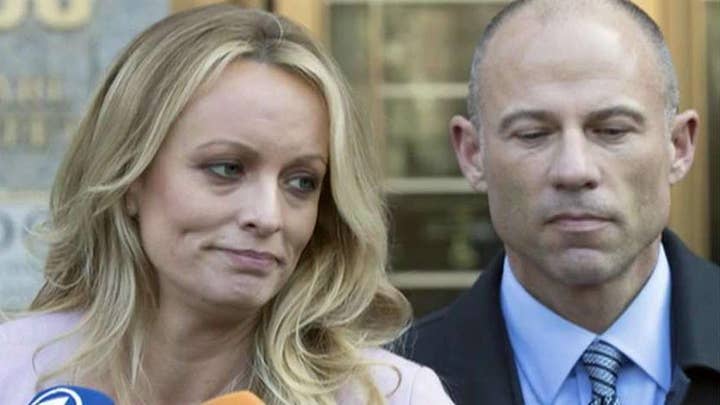 He was ordered to remain in custody and is set to be transferred to New York for his other criminal trial. U.S. District Court Judge James Selna said during Wednesday’s hearing that there was ongoing danger of the tough-talking lawyer committing similar conduct if freed, calling the chance “real and palpable.”

The arrest threatened to disrupt Avenatti’s trial in Manhattan on charges he tried to extort $25 million from Nike, a New York federal judge said Wednesday. The trial was scheduled for Jan. 21, but it was adjourned Wednesday with no new date.

The judge said he was "very reluctant" to move the trial start date beyond Jan. 27, but a new court date will be issued on Tuesday. Avenatti is supposed to be transferred to New York on Friday, but the government said it could possibly be moved to next week.

“The arrest of Mr. Avenatti this close to the trial has essentially thrown the trial into chaos,” U.S. District Judge Paul G. Gardephe said. “Mr. Avenatti has been on bail in the California case for a long time, so there are certainly questions in my mind about why it was necessary to raise allegations about bail violations so close to the trial and it certainly has put defense counsel in a very difficult position.”

Avenatti is set to face trial in May in California on a 36-count indictment including allegations that he defrauded clients of millions of dollars, stiffed the IRS and committed bank fraud.

He has pleaded not guilty to those charges, along with allegations in a criminal case in Manhattan federal court alleging he ripped off ex-client adult-film star Stormy Daniels of proceeds of a book deal. The second New York trial also is scheduled to start in May.