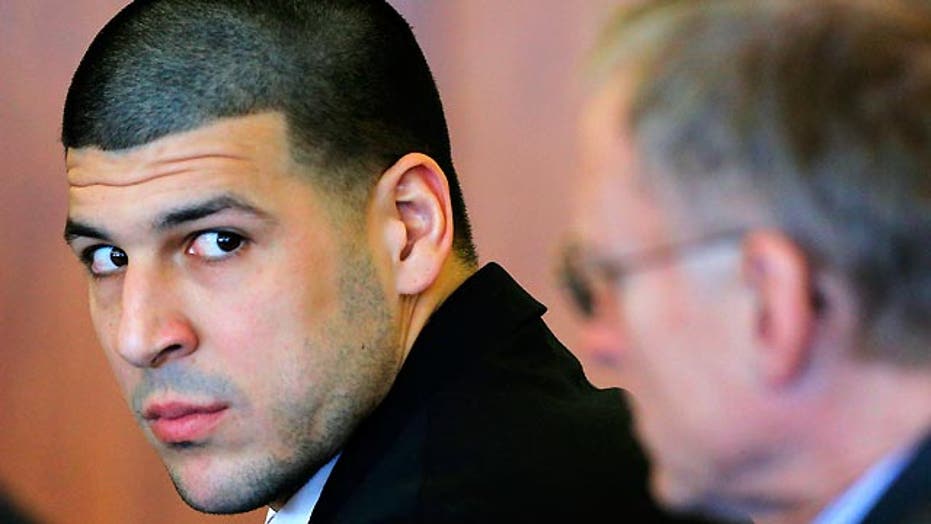 FALL RIVER, Mass. – Former New England Patriots player Aaron Hernandez orchestrated the killing of a semiprofessional football player, then covered up, prosecutors charged Thursday in opening statements, while the defense countered that authorities ignored the evidence and zeroed in on their client from the beginning.

The prosecution and defense teams laid out their cases in Hernandez's murder trial Thursday, just days before his old team was to play in the Super Bowl.

Hernandez is charged with the 2013 killing of Odin Lloyd, who was dating the sister of Hernandez's fiancee, Shayanna Jenkins. Lloyd was found shot to death in an industrial park near Hernandez's North Attleborough home, not far from Gillette Stadium.

Hernandez had a $40 million contract as a tight end with the New England Patriots when he was arrested in June 2013 and charged with murder.

Bristol County Assistant District Attorney Patrick Bomberg took jurors through what he says was the sequence of events that led to Lloyd's death.

He played video surveillance that he said showed Lloyd getting into a car driven by Hernandez shortly before his killing, then video taken at Hernandez's home shortly after the killing without Lloyd in the car.

He showed them an image taken off Hernandez's video surveillance system that showed Hernandez standing outside his basement, holding in his left hand what Bomberg said was a gun.

He also told jurors that a marijuana joint found near Lloyd's body had both Lloyd and Henrandez's DNA on it.

As Bomberg showed jurors a photo of Lloyd's body, his mother was overcome and had to leave the courtroom briefly.

Defense lawyer Michael Fee began and ended his opening statement by declaring that Hernandez was an innocent man.

He said evidence would show that Hernandez did not kill Lloyd and did not ask anyone to do so. He said authorities could offer no motive for the killing.

"We are here because the police and prosecutors targeted him from the very beginning," Fee said.

He said as soon as investigators learned Hernandez knew Lloyd, they focused on him.

"Aaron never had a chance," Fee said. "They locked on Aaron and they targeted him."

He said Hernandez had no reason to kill Lloyd.

"The investigation was sloppy and unprofessional. What about the facts that showed Aaron's innocence?" he said. "The evidence will show that they were ignored."

Prosecutors have listed Jenkins as a possible witness and this month petitioned the court to grant immunity to her. That could compel her to testify. The court has not said whether it was granted. Thursday was the first day since the petition was heard that Jenkins appeared in the courtroom.

Prosecutors say Hernandez and two friends, Carlos Ortiz and Ernest Wallace, picked Lloyd up at his home in Boston, drove him to the industrial park and shot him to death.

Ortiz and Wallace have pleaded not guilty and will be tried separately.

Hernandez is also charged with murder in a 2012 double homicide in Boston. The judge has ruled that prosecutors won't be allowed to tell the jury about that case.

Opening statements were delayed briefly Thursday while a judge addressed a couple of jury issues. One juror was late to court, and another juror sent a note to the judge. The judge then individually questioned jurors before swearing them in.  Six of the 18 jurors will be randomly selected as alternates immediately before deliberations begin.