Holocaust survivor speaks out against critical race theory, communism: 'let them be children'

A recent report published by a trio of college professors details "effective responses" school leaders can use when questioned by parents who are concerned about critical race theory curricula.

"The goal of effective messaging is essentially to step away from the fueling of fear because people can very easily go down a rabbit hole of engaging in debates that become echo chambers," Francesca López, one of the authors of the report, said, according to Education Week. She serves as the Waterbury Chair in Equity Pedagogy at The Pennsylvania State University.

"Effective messaging moves beyond just engaging in a debate," she added. "It keeps people focused with a clear message on what, for example, equity-focused approaches in education are really meant to do."

The report was published in Kappan, an outlet that reports on issues related to education, and appeared in the publication's November issue.

Amy Carney speaks on behalf of parents during a protest against critical race theory being taught at Scottsdale Unified School District before a digital school board meeting at Coronado High School in Scottsdale on May 24, 2021. (Reuters)

The report provides teachers and school leaders a three-step approach on how to address concerned parents, including: opening the conversation with a shared value both parties hold; "use active voice to name an antagonist (e.g., the people who are trying to divide us) and call out divide-and-conquer tactics;" and ending the conversation with a "strong, positive call to action that affirms common values," as opposed to being race-neutral or colorblind.

The report argued that elements of CRT can appear in K-12 curricula and can help students "unpack and rethink the social construct of race that divides so much of U.S. society." School leaders "must support teachers in including discussions about race in education in ways that are aligned with CRT principles," the report continues.

Opponents critical race theory protest outside of the Loudoun County School Board headquarters, in Ashburn, Virginia, on June 22, 2021. (REUTERS/Evelyn Hockstein)

The lead author of the report, who serves as an associate professor of educational leadership at Montclair State University, Emily Hodge, argued that conservative media outlets and organizations "have inflamed the emotions of parents, often those who are conservative, white parents in suburban, diversifying districts," according to Education Week.

"The people who are orchestrating these kinds of media campaigns are concerned about power and politics and not actually about individual children or what’s happening at school," Hodge said.

Hodge argued that school leaders should respond to concerned parents with "a shared sense of unity" because using a "logical argument" on "angry or fearful parents" might not be effective, Education week reported.

Shelley Slebrch and other angry parents and community members protest after a Loudoun County School Board meeting was halted by the school board because the crowd refused to quiet down, in Ashburn, Virginia, U.S.  June 22, 2021. REUTERS/Evelyn Hockstein (Reuters)

"Instead, if you also appeal to emotion and create a shared sense of unity as a community, that is a more effective route," Hodge said. "Because it makes people feel like ‘we have common values and a common vision, we can work together.’"

School board meetings have erupted with outraged parents in recent years who argue critical race theory is a racist and divisive concept.

"I don't know about you, but telling my child or any child that they are in a permanent oppressed status in America because they are Black is racist – and saying that White people are automatically above me, my children, or any child is racist as well. This is not something that we can stand for in our country," one Florida mom said at a school board meeting last year. 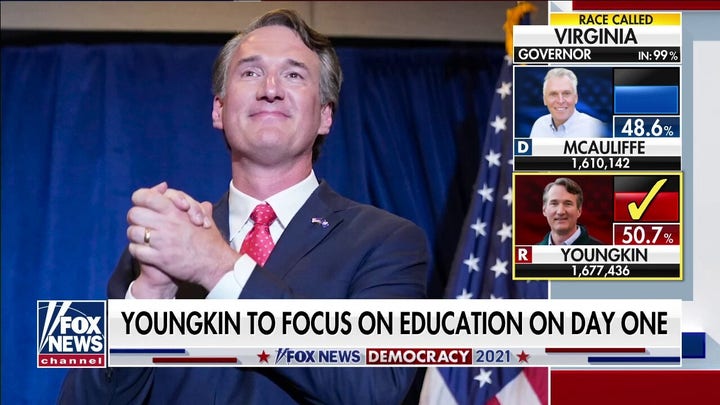 CRT has also been at the forefront of some political campaigns, including in Virginia’s gubernatorial election last year. Republican Gov. Glenn Youngkin won his campaign in 2021 after strongly opposing critical race theory curricula and vowing to keep it out of schools.