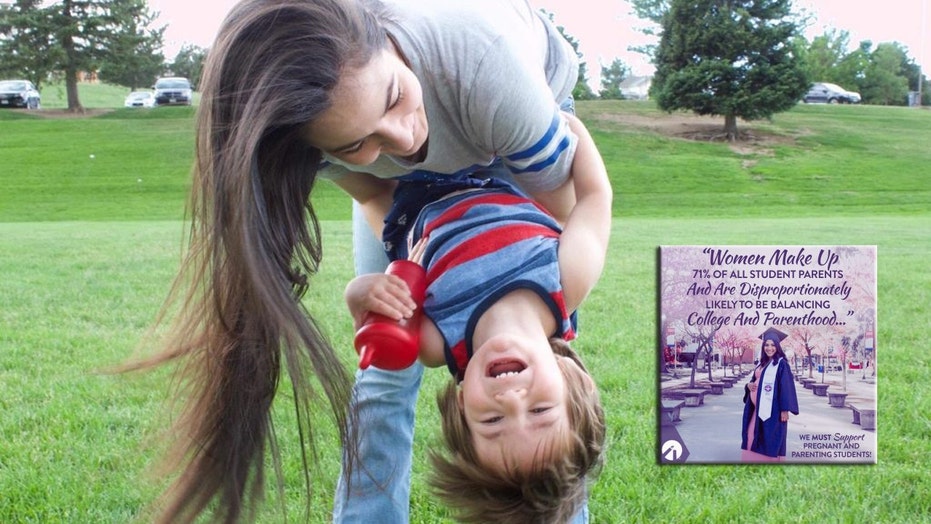 A national pro-life group launched a campaign to inform college students who are pregnant or are already parents of their rights on campus -- and they just got to inform one mom about how they're going to help her finish school.

Students for Life of America helped Ruth Asmarzadeh, a college student who was unable to finish her degree at Pikes Peak Community College in Colorado after she says her Title IX rights were violated. She became pregnant in 2016 and said she was pressured to get an abortion. Ultimately, Asmarzadeh chose to have her child.

"I don't like to imagine my life without my son or my education," she told Fox News. "In fact, it breaks my heart knowing at one point I had to choose between the two."

She said she felt "helpless" when she lost her financial aid and wasn't able to reschedule her exams, so she reached out to the pro-life organization, which helped her get financial aid back -- and threw her a baby shower. This week, SFLA surprised her with $6,000 to ensure she could finish her education.

SLFA president Kristan Hawkins called Asmarzadeh, who is currently working three jobs, to let her know about the surprise after the group launched a national campaign, the "Pregnant on Campus Initiative," to help pregnant and parenting students get the resources they need on campus.

"One of the things we always say at Students for Life is no woman should have to choose between her education and her child," Hawkins told Asmarzadeh. She also informed Asmarzadeh about the fundraising page reaching the amount she needed to get her degree and "the job of her dreams."

"Thank you. I'm honored and grateful for all of this," Asmarzadeh said, as her son, Eli, could be heard talking in the background. "I'm sure he will be very thankful when he's able to understand one day. Thank you."

BABY FAITH WHO SURVIVED MEXICAN DRUG CARTEL MASSACRE REUNITED WITH FATHER: 'SHE IS A LIVING ANGEL'

SFLA also informed Asmarzadeh's college that her Title IX rights were violated as part of the campaign to let other students know they cannot be discriminated against or face the loss of scholarships, housing, athletic eligibility or an opportunity simply because of their pregnancy or parental status.

As part of the "Pregnant and Parenting Bill of Rights," Hawkins said the first step is to educate students about their rights on campus, especially given the pressure of abortion in higher education today. Then the intention is to provide them with support, including legal assistance from Alliance Defending Freedom.

“Pregnancy should mark the beginning of a new life, not the end of an academic career,"  Hawkins said in a statement. “Know your Title IX rights.”

Asmarzadeh says she feels empowered by SFLA's help and hopes to one day give back as a licensed counselor. She plans to return to school during the spring semester.