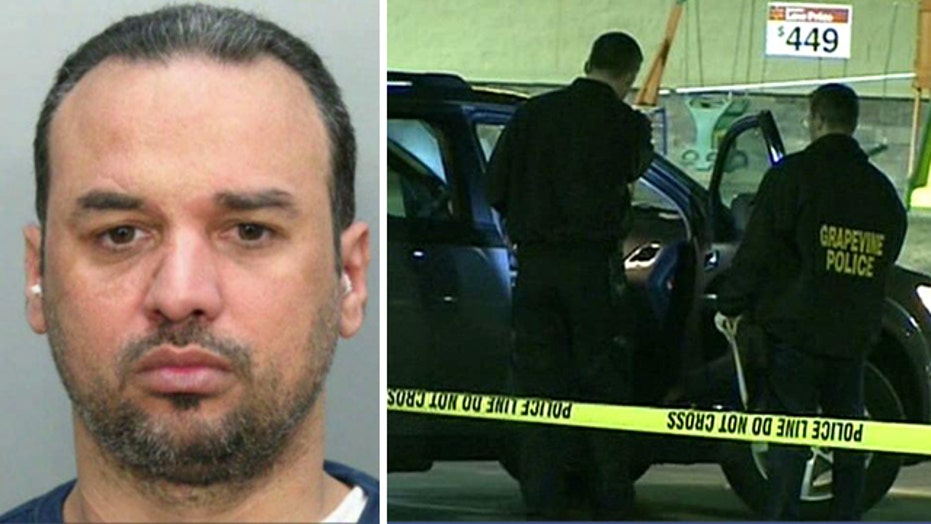 Manhunt under way for prisoner who stabbed his police escort

MIAMI – A manhunt is under way for a prisoner convicted in two violent sexual assaults who stabbed one of two police escorts and escaped in the Dallas area as he was being transferred from Florida to Nevada, police said Tuesday.

Alberto Morales, 42, somehow obtained a sharp object and stabbed one of the officers once in the neck and three times in the back Monday night outside a Walmart in Grapevine, police said. Miami-Dade Police Detective Jaime Pardinas, a 54-year-old who has been on the force for 28 years, is in serious but stable condition.

Pardinas and Detective David Carrero were scheduled to fly with Morales to Nevada, where he was to serve a sentence of 30 years to life for a conviction of sexual assault with a weapon. But the officers and Morales weren't allowed to get back on the plane during a layover in Texas because of the inmate's erratic behavior, authorities said.

During the first leg of the flight, Morales was "bumping his head against a passenger seat in front of him, so he was doing a lot of crazy, unusual things that just disrupted the entire flight," said Miami-Dade Police Director J.D. Patterson Jr.

Miami-Dade Police Deputy Director Juan Perez said that it is out of the ordinary, but that airlines occasionally ask officers and their escorted inmates to leave because of liability issues.

The detectives were then forced to rent a vehicle at Dallas-Fort Worth Internationhe attorney said.

Morales eventually pleaded guilty in 2008 to sexually assaulting a woman at an apartment blocks away from the Las Vegas Strip in 2003. The woman told police a man jumped from her closet in the middle of the night, held a gun to her face, blindfolded her, attacked her several times and left after telling her he would kill her if she called police, according to Clark County District Court documents.

Back in Miami, Morales was sentenced to 10 years in prison in December after pleading guilty to sexual battery with a deadly weapon, burglary with assault and kidnapping stemming from a 2003 crime.