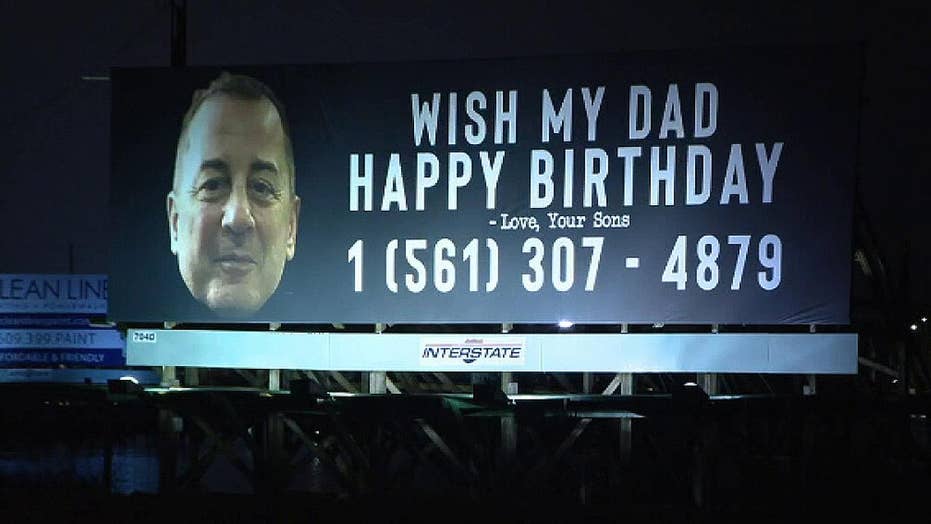 A South New Jersey man’s phone has reportedly been ringing off the hook after his two sons rented a billboard to wish their dad a happy birthday -- next to his phone number and a giant photo of his face.

Chris Ferry, of Linwood, said the billboard on Black Horse Pike outside of Atlantic City has even brought in international calls since going viral on social media. Ferry, who turns 62 on Saturday, told KYW News Radio he received about 10,000 calls and text messages in less than a week.

“People say, ‘I lost my dad last year.’ I had one guy tell me, ‘I tried to call my father to tell him about the billboard and he didn’t pick up, so I figured I would call you to talk to you and now you’re not picking up.”

His son, Christopher Ferry Jr., who lives in Florida with brother, Michael, told Fox 29 that the two sons have a long history of birthday jokes with their dad but that this one definitely takes the cake.

“We wanted it to be a birthday for him to remember,” Ferry Jr. told the New York Post.

“He’s trying to answer as many texts as he can, he’s answering phone calls. He’s actually really getting a kick out of this.”

Even though Ferry said the prank practically hijacked his smartphone, leaving him unable to use the device in a normal way, he’s enjoying the gesture.

“It was a neat idea. I wish I would’ve thought of it,” said Ferry.