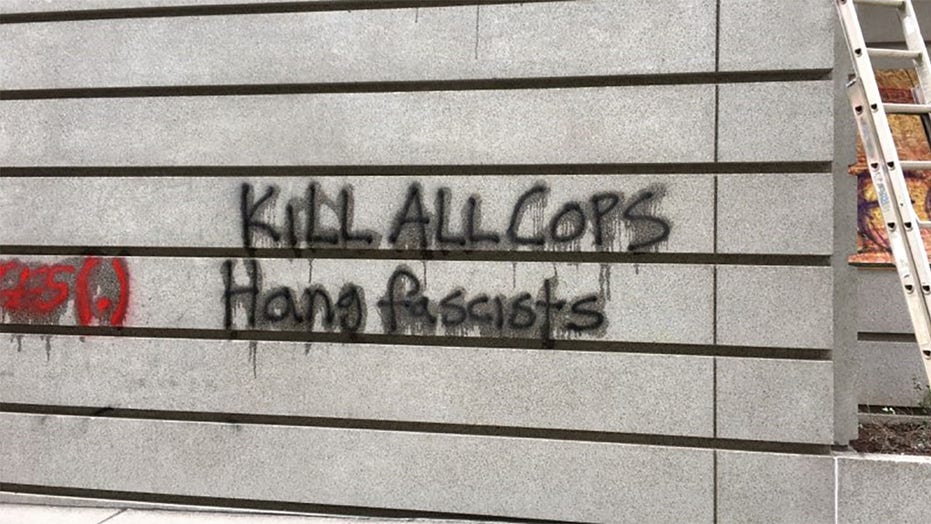 Police in Portland, Ore., arrested eight protesters Saturday after a demonstration turned violent near the Portland Justice Center, where graffiti calling for the death of cops was scrawled on nearby buildings, authorities said.

Demonstrators started gathering around 7:30 p.m. and used fencing and barricades to block a street, Portland police said in a news release Sunday.

A woman on a loudspeaker could be heard calling for violent resistance from the crowd, police said.

Authorities warned demonstrators several times not to block the streets, which were open to traffic, but the crowd remained on the roadways.

Anti-cop graffiti reading “Kill All Cops" was found on a Portland building during a demonstration that turned violent on Saturday, police said. (Portland Police Bureau)

Graffiti calling for the death of cops was also found painted on several buildings in the area, including the Justice Center and the Federal Courthouse, police said.

Photos from the scene show one tag reading “Kill All Cops,” while a second one reads “All Cops Are Burnable” with a heart drawn beneath it.

Anti-cop graffiti reading “All Cops Are Burnable” with a heart drawn beneath it was found on a Portland building during a demonstration that turned violent on Saturday, police said, (Portland Police Bureau)

Authorities declared an unlawful assembly shortly before 10:30 p.m. and issued further warnings of arrests, force, or crowd control. The crowd again remained in the area.

“During this engagement, officers had rocks, glass bottles, and paint thrown at them,” police said. “Lasers and lights were directed at the officer's eyes. Crowd control munitions were used during this interaction, but not CS gas.”

Officers issued more warnings and began making arrests at 1:20 a.m. after demonstrators began to block the Central Precinct door and roll down the gates. Two dumpsters were rolled into the street and several sidewalk garbage cans were set on fire.

One officer was struck in the face with a skateboard and suffered a minor injury during an arrest, police said.

Police arrested eight people associated with the protest throughout the night.