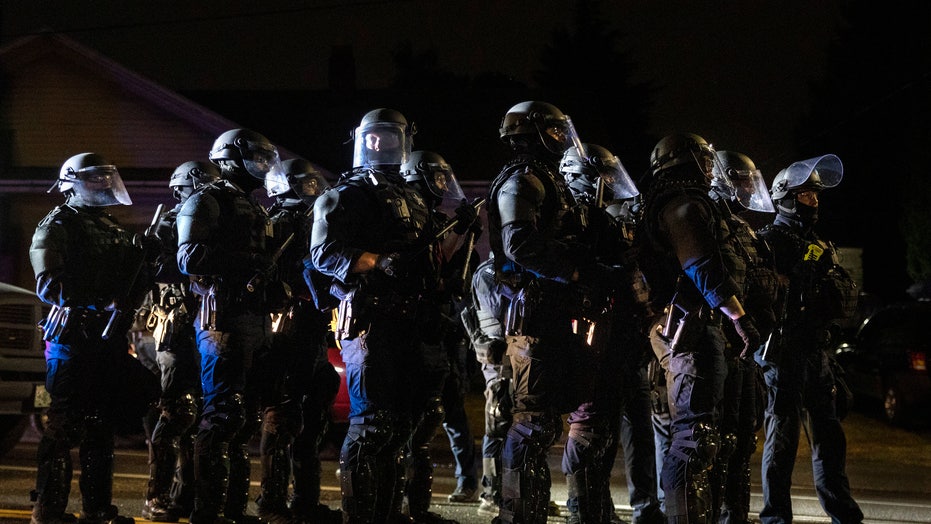 Portland Police declared a riot on Monday after roughly hundreds of protesters marched on Mayor Ted Wheeler's residence at a condominium tower to demand his resignation, according to reports.

The crowd of about 200 were there to mockingly celebrate the mayor's birthday before the demonstration quickly turned destructive and an "arson fire" was reported, police said.

Protesters lit a fire in the street, as some danced to the "Macarena," according to Allison Mechanic, a reporter for KATU News who posted the video on Twitter. Others placed a picnic table from a nearby business above the fire to feed the blaze.

Demonstrators shattered windows and broke into a dental office, taking items -- including a chair -- to add to the fire, the Oregonian reported. A bundle of newspapers was also set ablaze and thrown into a storefront, located on the ground floor of the residential building around 11 p.m. -- leading police to declare the gathering a riot.

"This was the arson fire that prompted a riot declaration tonight," police wrote on Twitter. "It was critical to secure the area to allow firefighters to respond to this dangerous situation."

Mike Baker, a correspondent with the New York Times, tweeted that some protesters were angry over the actions of protesters on Monday because it "endangers the people in the building and minority-owned businesses in the complex."

Earlier in the night, protesters were captured on video singing an altered version of “Happy Birthday” to Wheeler, who turned 58 years old on Aug. 31.

The protesters sang, in part, “Happy tear gas for [inaudible] Wheeler, happy tear gas to you," according to Corry Young, a photographer for KATU News, who posted the footage to Twitter.

Wheeler has been targeted by some demonstrators in Portland who say he's been too heavy-handed with the use of the city’s police force. Protesters have issued demands, including police budget reductions, as well as, his resignation. On Friday, there was a sit-in protest in the lobby of his condo.

Portland police take control of the streets after making arrests on the scene of the nightly protests at a Portland police precinct on Sunday, Aug. 30, 2020, in Portland, Ore. (AP Photo/Paula Bronstein)

Portland has been gripped by nightly protests for three months since the police killing of George Floyd in Minneapolis. The demonstrations, often violent, usually target police buildings and federal buildings. Some protesters have called for reductions in police budgets while the city’s mayor and some in the Black community have decried the violence, saying it’s counterproductive.