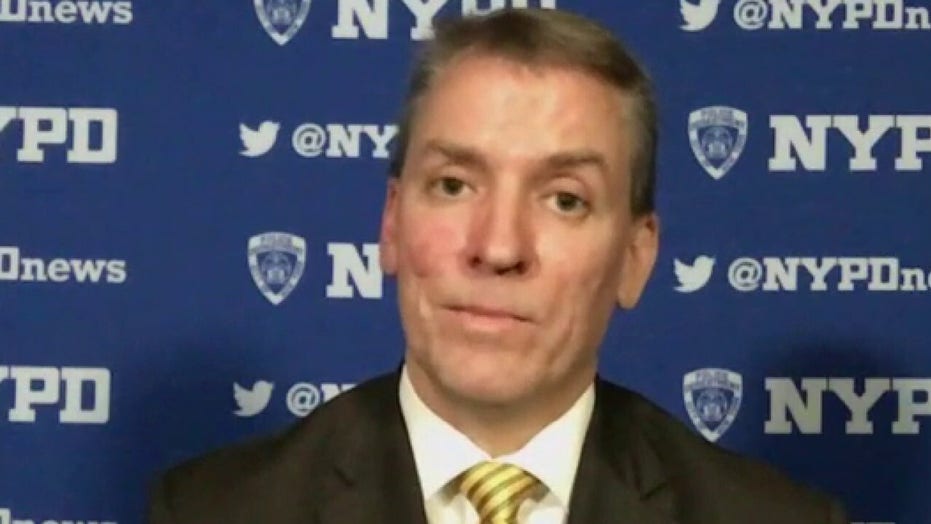 As protests over the death of George Floyd entered their second week Tuesday, police officers have increasingly found themselves the target of attacks.

Public officials have said the nationwide demonstrations against police brutality have been mostly peaceful, with small groups engaging in at-times violent acts that include vandalism, theft, arson and assault. In the days following Floyd's death, protesters have focused their anger on the criminal justice system and police accountability.

The mass gatherings were sparked after the release of a video showing a Minneapolis police officer pinning his knee on Floyd's neck for eight minutes during a May 25 arrest. Floyd can be heard saying he can't breathe several times in the video. The officer, Derek Chauvin, was fired and has since been charged with murder. 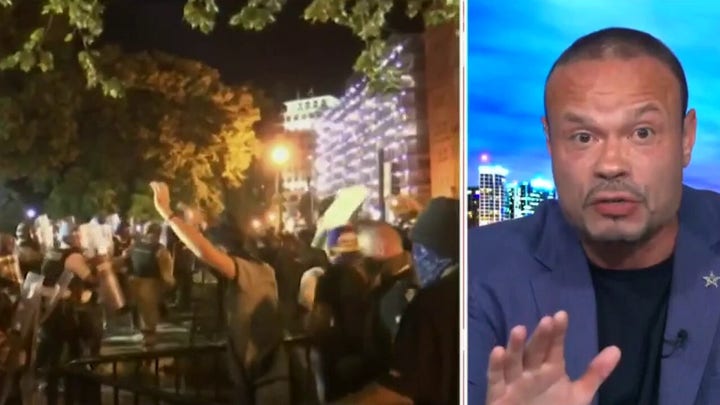 Chauvin's arrest has done little to quell the anger and the divide between law enforcement and protesters. Tense confrontations between crowds and authorities have at times escalated into violence.

Police agencies have also been criticized for a harsh response to peaceful demonstrators in some instances.

Below is a list of incidents where law enforcement personnel have been attacked throughout a week of widespread protests:

A 21-year-old man was arrested Sunday for allegedly throwing a brick at a police officer during a Saturday night clash between authorities and protesters. The officer was treated and released from a hospital.

Several protesters were arrested and an officer was injured Monday following heated verbal exchanges between demonstrators and law enforcement, NJ.com reported. An officer was taken to a hospital with a head injury after some threw rocks at the police.

Motor Officer Maximilian Brewer was struck by an ATV Saturday night while blocking traffic near protesters in the city's downtown. He underwent surgery and is still recovering, WXIA-TV reported. The 42-year-driver driver of the vehicle was arrested on a slew of criminal charges.

The city also fired two officers for using excessive force on a pair of college students while placing them under arrest.

A separate riot after a peaceful protest erupted in the Boston-area suburb Tuesday night that saw a state trooper and several Brockton police officers suffered minor injuries, according to WPRI-TV.

Two law enforcement officers were struck by a vehicle Monday and another was run over during a demonstration in front of the Buffalo Police Department's E-District. A New York State trooper and a Buffalo police officer were hit and another trooper was run over, authorities said.

The trooper who was run over suffered a shattered pelvis and a broken leg. The other trooper and Buffalo Police officer were treated for minor injuries, authorities said.

People carry signs as they march Monday, June 1, 2020, in Atlanta during a demonstration over the death of George Floyd, who died after being restrained by Minneapolis police officers on May 25. (AP Photo/John Bazemore).

An officer was saved by a ballistic helmet when a bullet struck the protective covering Sunday.

More than a dozen people were arrested and 15 law enforcement officers were hurt during Saturday protests, according to media reports. Three Richland County Sheriff's deputies and 12 Columbia police officers were injured. They were all expected to be OK, WBTV reported.

The Chicago Police Department reported Monday that 132 of its officers had been injured during violent riots.

An undercover Davenport police officer in an unmarked police vehicle was struck twice by gunfire early Monday after several gunshots struck the vehicle. Two other officers inside were uninjured, WQAD-TV reported. The wounded officer was taken to a hospital. The officer's status was not clear Tuesday.

The trio was called to the area to investigate a suspicious vehicle.

A hit-and-run injured three Denver police officers Saturday night and a bystander, police said. Two of the officers have been released from the hospital. A 37-year-old man was arrested Sunday in connection with the incident. 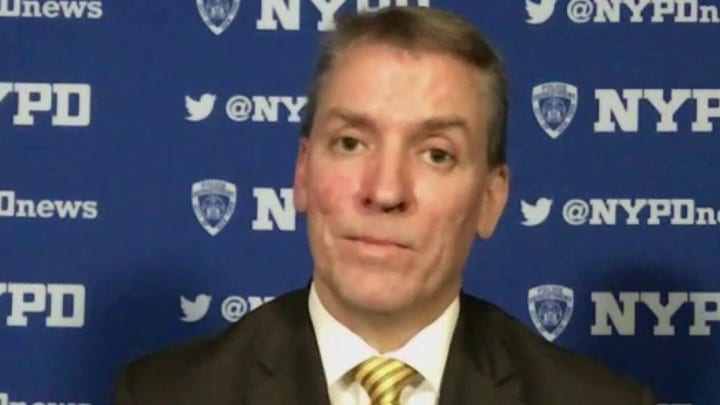 A pair of Pennsylvania Capitol police officers were released from the hospital following a chaotic protest in Harrisburg on Saturday while responding to calls to assist city police.

A Las Vegas police officer was on life support after being shot in the head late Monday during a protest. A 20-year-old suspect has been charged with attempted murder with a deadly weapon and two counts of discharging a gun where a person might be endangered.

The officer remains in critical condition, according to the Las Vegas Review-Journal.

Another shooting was reported at the Foley Federal Building Monday evening, according to the paper. Officers fired upon a man “who was armed with multiple firearms and appeared to be wearing body armor,” officials said. It was not clear if the man was shot or was involved in the protest.

Some 12 officers were injured Friday in a similar demonstration.

Protesters allegedly shot at officers during a Monday evening protest. No injuries were reported.

Shots were fired at law enforcement officers near a Minneapolis police station last week. On May 28, another police precinct in the city was set ablaze as violent protests surged in the Twin Cities region.

Four Prince William County Police officers were injured Saturday night and several police cars were damaged after officers attempted to shut down a protest, the Prince Williams Times reported. Officers reported rocks and other objects being thrown at them.

A protester, center, tries to stop others from attacking a police vehicle during a protest over the death of George Floyd in Los Angeles on Saturday. (AP Photo/Ringo H.W. Chiu)

Dozens of NYPD officers have been injured and police vehicles have been damaged amid the ongoing protests. The NYPD has also been criticized for its perceived hard-handed response to demonstrations across the city.

Mayor Bill de Blasio enraged many New Yorkers when he defended officers after a video showed an NYPD SUV driving into protesters. Dozens of police vehicles have been torched and hundreds have been arrested on various criminal charges, including burglary.

In another incident in the Bronx captured on social media, an NYPD officer was seen being struck by a vehicle in what appeared to be a deliberate hit-and-run.

The FBI Joint Terrorism Task Force is investigating yet another incident in Brooklyn on Wednesday where an officer was stabbed in the neck and two others suffered gunshot wounds in a random "unprovoked" late-night attack.

Two police officers suffered minor injuries Wednesday during a tense confrontation between protesters against police brutality and counterprotesters. The officers were injured when they intervened during a fight between people from both groups.

Several shots were fired at Oakland police headquarters early Monday. No injuries were reported but three people were detained. A federal law enforcement officer was also shot and killed Friday night by someone in a vehicle at the Ronald V. Dellums Federal Building, the FBI said. Dave Patrick Underwood, 53, was providing security at a U.S. courthouse.

Another officer was injured in the same shooting, the law enforcement agency said. The officer's condition was not clear Tuesday.

Nine police officers were injured Monday during confrontations with protesters. Some protesters threw objects and canisters at the police, the Pittsburgh Post-Gazette reported.

The officers were treated at a hospital and released.

Two Capitol police officers were hurt over the weekend after they were hit by objects Saturday night. One officer reported being hit with a baseball bat and the other with a beer bottle. Both are expected to recover, WWBT-TV reported.

Policemen surround an NYPD vehicle after it was vandalized by protestors over the death of George Floyd, a black man who was in police custody in Minneapolis, on Saturday in the Brooklyn borough of New York. Floyd died after being restrained by Minneapolis police officers on Memorial Day. (AP Photo/Wong Maye-E)

Sacramento police said seven of its officers suffered minor injuries from being hit with objects Friday.

One police car was torched and 21 police officers were injured Saturday during a night of civil disorder. One officer was hit in the back of the head with a baseball bar, officials said. The officers all received medical care.

Officers were pelted with bricks and bottles following a peaceful protest, injuring at least three, according to KSAT-TV. Authorities made it clear that protest organizers were not to blame.

An officer was taken to a hospital with non-life threatening injuries and several others sustained minor injuries during a May 29 rally after being hit with rocks and bottles, KGO-TV reported.

Two police officers -- one from the Santa Ana Police Department and the other from nearby Anaheim -- were injured during a Sunday night protest and hospitalized. Both officers were hit by projectiles in the head, The Orange County Register reported.

Around 50 Secret Service agents were injured late Sunday as rioters set fires near the White House and authorities conducted searches for car bombs in the nation's capital. Some agents were hurt from incoming bottles and Molotov cocktails in Lafayette Park, just across from the presidential residence.

A retired police captain was fatally shot early Tuesday by looters at a pawn shop, the St. Louis Post-Dispatch reported. The slaying of David Dorn, 77, was reportedly broadcast on Facebook Live. No arrests have been made. 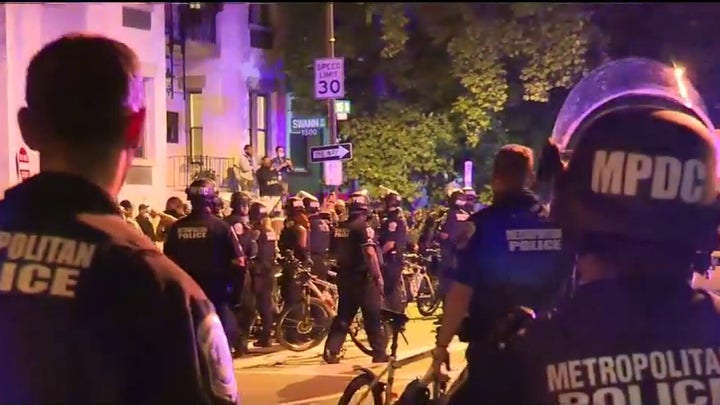 Officials in the nation's capital said 11 police officers were hurt during demonstrations Sunday evening. The officers sustained non-life-threatening injuries and one officer was expected to undergo surgery for a leg fracture after being hit by a brick, WTOP-TV reported. On top that, more than 50 Secret Service agents were injured, some by Molotov cocktails.