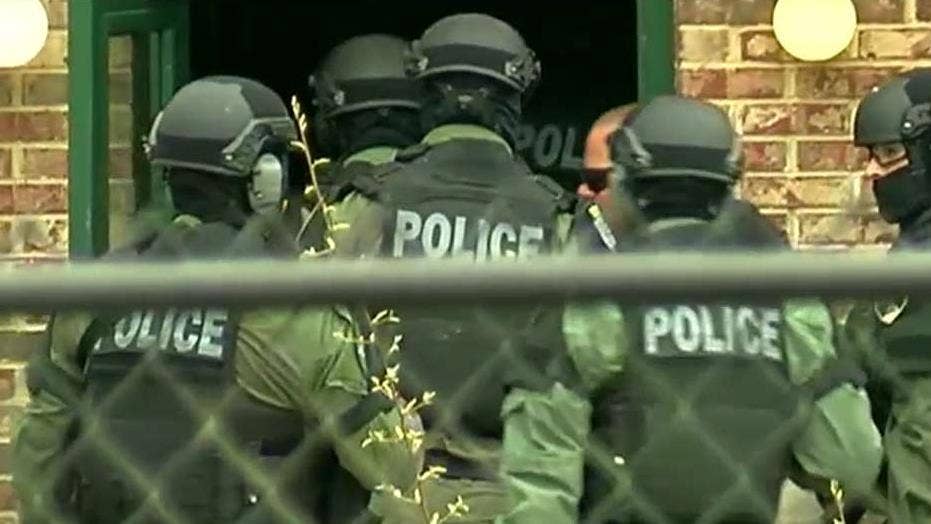 Authorities searched a Birmingham apartment complex for several hours in the case of a 3-year-old Alabama girl believed to have been abducted from a birthday party around 8:30 p.m. Saturday – but the child's whereabouts remain a mystery.

WBRC reported that Birmingham police received a tip Wednesday morning and spent more than three hours searching every apartment and car in the area.

MCKINNEY WAS PLAYING OUTSIDE WITH OTHER CHILDREN WHEN SHE WAS TAKEN

Kamille “Cupcake” McKinney was last seen Saturday at her home in Avondale, where witnesses say she was “picked up at a birthday party by an unknown male/female in a dark SUV,” according to an Amber Alert.

McKinney is described as having brown hair and brown eyes, weighing 60 pounds and standing 3 feet tall.

She was last seen wearing a pink Minnie Mouse shirt.

Kamille “Cupcake” McKinney was last seen Saturday at her home in Avondale, where witnesses say she was “picked up at a birthday party by an unknown male/female in a dark SUV,” according to an Amber Alert. (Attorney General Steve Marshall)

“I’m just trying to stay strong for Cupcake mainly. This isn’t about nobody else, this is about Cupcake. Bringing Cupcake home and bringing these people to justice,” her grandmother Lekisha Simpson told WBRC. “I just want to say to that person, let her go, Do the right thing. It could have been you. It could have been your child. Anybody just let her go.”

A man, 39-year-old Patrick Devone Stallworth, and a woman, 29-year-old Derick Irisha Brown, described as persons of interest, were arrested and charged with crimes that police said were unrelated to the girl’s disappearance, The Associated Press reported.

Officials have announced rewards totaling $6,000 for information leading to an arrest and conviction in the child’s disappearance.