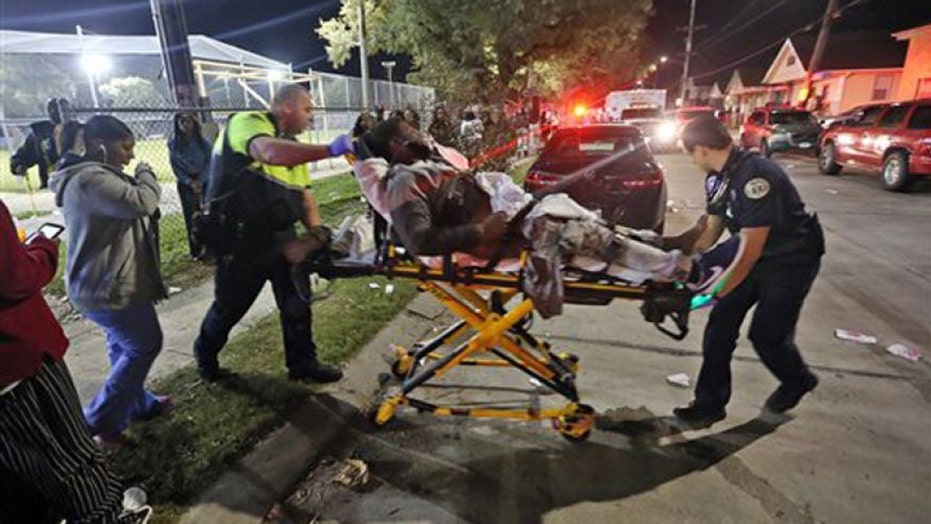 A dispute between two groups of people in a New Orleans park Sunday escalated into a shooting that injured at least 16 people, police said late Sunday.

The shooting took place at around 6 p.m. local time after approximately 500 people had gathered at Bunny Friend Playground in the city's 9th Ward to film a music video, the New Orleans Police Department said in a statement. Ambulances took 10 victims to area hospitals, and police later learned that another six victims had been taken to the hospital in private vehicles.

Photos of the scene showed emergency workers wheeling some of the wounded to ambulances on gurneys while other people who appeared to be in pain lay on the ground. No deaths were immediately reported and police had few details on the extent of the victims' injuries.

Police spokesman Tyler Gamble told the Associated Press that the video was being made without a permit to use the park. He added that police were on their way to break up the crowd when the shooting took place.

New Orleans Police Superintendent Michael Harrison told reporters that officers were a block away from the park when they heard the gunshots and were flagged down by passersby.

Joseph Jordan was inside a house across the street from the park with his friend, who gave her first name as Raven, when they heard gunshots. Later someone called Raven and told her that her niece had been shot. The two rushed to the hospital to check on the 14-year-old, who had been shot three times in the leg.

Speaking of the hospital, Jordan said: "It's still crowded back there."

Other witnesses told The Times-Picayune newspaper that the gathering was part of an after-party that followed a neighborhood parade. One said the shooting "sounded like New Year's Eve all over again."

The paper reported that multiple witnesses saw a man with a silver machine gun fleeing the scene, but noted that the shooting continued as the man ran away.