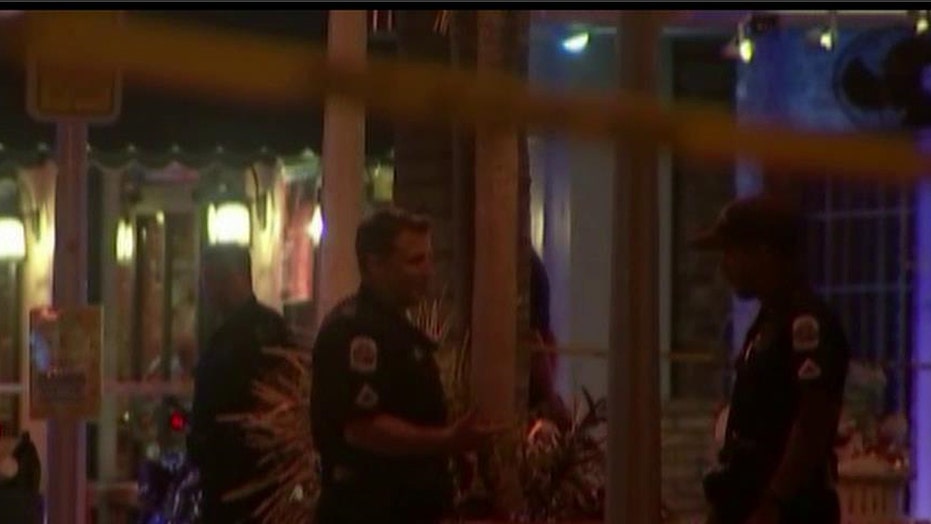 One dead, five injured in shooting at ZombieCon festival

Fort Meyers Police say the suspect in a deadly shooting fired a semi-automatic handgun into a crowd Saturday, sending thousands of revelers attending the ZombiCon festival fleeing into the streets and fearing for their lives.

Calling the shooting that left one dead and five people injured a “heinous crime” in a press release Monday, police thanked the public for the many tips that have helped authorities piece together what happened at the annual zombie-themed art and music festival.

Police say they have a suspect, described as a white or possibly Hispanic male in his late teens or early twenties, dressed in a black t-shirt and a flat-billed black and red baseball hat. No arrests have been made and police have not released a motive in the shooting.

After the gunman opened fire at the tail end of the festivities, he fled westbound into the street, according to police. Witnesses say the sound of gunshots created a chaotic scene where spectators— many with ghoulish face paint and spattered fake blood— screamed in terror and ran in droves to escape the shooting.

Large crowds were still in the streets and authorities quickly cleared out nearby bars and set up crime scene tape, while others patrolled the area with rifles searching for a suspect.

Authorities said the suspect or suspects were still at large and did not release any information about a possible motive. They were reviewing surveillance videos from nearby restaurants and shops in search of clues.

"There were a lot of witnesses down here, there were a lot of people taking pictures, videos with their cellphone," Medico told the News-Press. "Anything that could help with this investigation would be greatly appreciated."

Jasmine Gaure, Taylor's girlfriend, told the newspaper they had only been at the festival for about 45 minutes when gunshots rang out. They were standing in line for a drink and hit the ground with everyone else when they heard the shots. When everyone raised their heads a few minutes later, Taylor was motionless, still wearing his creepy clown mask.

ASA football coach Ernest Jones told the newspaper Taylor "stood out." He was a walk-on player and was one of 6 out of 200 who made the cut in an August tryout.

A statement on the ZombiCon Facebook page said organizers were saddened by the news and the group takes the safety of its patrons very seriously.

ZombiCon has been a popular event for nearly a decade, but some local residents and business owners have not welcomed the crowd of costumed revelers in the street dressed as limping, bloated, degrading corpses.

Mayor Randall P. Henderson Jr. said the shooting would speed up plans to install security cameras throughout downtown. The ZombiCon shooting is the latest of several shootings, which the mayor said are difficult to prevent because they are often random and late at night. Yet he said the cameras would make it easier to catch criminals quickly.

"Sadly, we're moving in that direction. We need to be way more vigilant to keep citizens safe," he said.

Gaure, 26, said Taylor was interested in forensic science and had worked a funeral home preparing bodies for burial to get experience. He was hoping to become a mortician.

"He was heading in the right direction, he was going to be somebody," Gaure said.