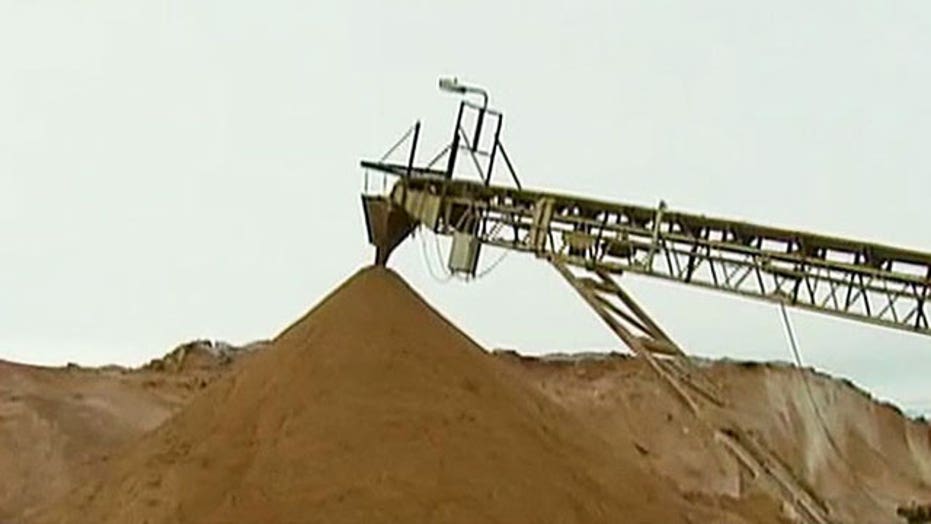 A winter of fierce snow storms has left several states running low on the salt used to melt ice and keep roads safe, but it isn't because the nation's mines are depleted.

It's a matter of logistics.

In Redmond, Utah, where Redmond Minerals supplies rock salt to 28 states, 200,000 tons of inventory is piled high and ready to be shipped out. But getting it to out-of-state road crews and to the shelves of retail stores can be tricky.

"The shortage in the Midwest and the Eastern states has created a little bit of a vacuum," said Redmond De-icing Products Team Leader Doug Anderson. "We've been contacted by a number of those states back in those areas... wanting more product. The challenge for us is really being able to get it back to them."

"People are now e-mailing, faxing, telephoning... any way they can get us in an order."

For now, salt-laden barges are getting stuck in frozen, jammed-up waterways. Sending trucks to haul the salt over the very roads for which the salt is destined and finding space for a seasonal product on on freight trains can also be problematic.

"There's a real shortage of rail cars and the infrastructure that we would need to get that kind of volume back there," Anderson said. "These customers are looking for tens of thousands of tons of product and obviously that becomes a bit of a challenge if you're just shipping it a little bit at a time, a truck load at a time."

Redmond's salt is in demand, because it works on roads at zero degrees Fahrenheit, yet is less corrosive naturally than white salt, said Anderson.

"Most of our customers tell us they can apply about half as much of our product {as opposed to white salt]," he said.

To prepare for winter, they mine the product year-round. Sales are about 130,000 tons ahead of last year's pace.

At The Salt Institute, a trade association, President Lori Roman agreed there is plenty of salt waiting to make roads safe. She noted a study showed road salt can reduce crashes by 88 percent.

"While many agencies try to have enough salt on hand in the fall to get them through an entire winter, recent weather is forcing many to order again mid-season which is not an ideal situation as there is a lead time for delivery," Roman said in a statement.

But getting that salt to places like the hard-hit East Coast, remains a challenge. New York's governor recently declared a state of emergency, an vicious snow and ice storms have wreaked havoc in more than a dozen states.

"People are now e-mailing, faxing, telephoning... any way they can get us in an order," said Lynbrook, N.Y.,-based Schoenberg Salt Co. owner Irwin Schoenberg. "Whether they call it in or just mail it in, the orders just kept coming in.  And we're just overwhelmed.  There's not enough material to take care of the population."

As hard hit areas scramble for salt supply, some are trying alternative de-icers, made of things like vegetable liquids, sugar based product, cheese brine and beer waste. There's also sand, which helps with traction, but does not melt the ice or snow.