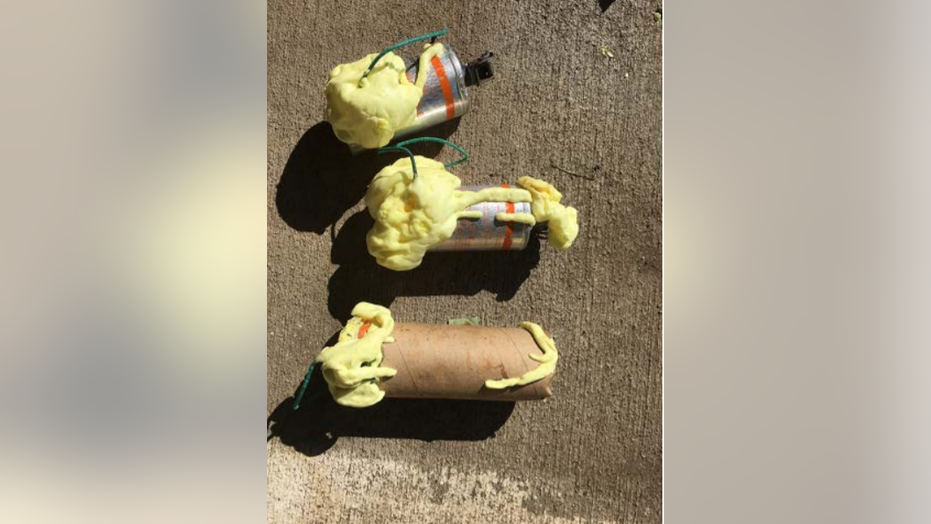 A Pennsylvania man was arrested after allegedly leaving a backpack full of Molotov cocktails in a bush outside protests in downtown Pittsburgh, authorities said on Saturday.

Matthew Michanowicz, 52, faces federal charges after he was captured on surveillance video placing the military-style backpack at PNC Plaza, according to a complaint by the U.S. District Attorney’s Office for the Western District of Pennsylvania.

Authorities said Michanowicz visited the downtown area on a bike to observe the "aftermath" of the riots. They added that during questioning he allegedly admitted to being the person depicted in photographs from the video footage, but denied possessing the bag or knowing its contents.

The devices were described as "spent OC vapor grenades" filled with an ignitable liquid and wicks that were held in place by what appeared to be "spray foam insulation," according to the complaint. (Department of Justice)

"Once again, we see that certain participants in the protests in Pittsburgh were only present to serve as agitators and to incite violence. Let’s call them what they are: criminals. They have no intention of peacefully exercising their First Amendment rights; they seek only to incite and destroy," said U.S. Attorney Scott Brady.

Pittsburgh Bureau of Police (PBP) officers were called to the plaza last Monday after security officers reported a suspicious bag by a bicycle rack under some trees, the complaint alleged. It added that officers allegedly found three devices and a foul odor before calling the PBP Bomb Squad, which discovered three suspected "homemade Molotov cocktails."

They were described as "spent OC vapor grenades" filled with an ignitable liquid and wicks that were held in place by what appeared to be "spray foam insulation," according to the complaint. It added that liquid was allegedly leaking out of one or more of the devices.

The federal charge comes amid continued protests and tension between demonstrators and law enforcement following the death of George Floyd in police custody on May 25. A pair of lawyers have also been accused of throwing a Molotov cocktail into a New York City police vehicle on May 30.

Michanowicz faces a federal charge of illegal possession of a destructive device. It carries a maximum potential penalty of 10 years in prison and a maximum fine of $250,000, the complaint added.