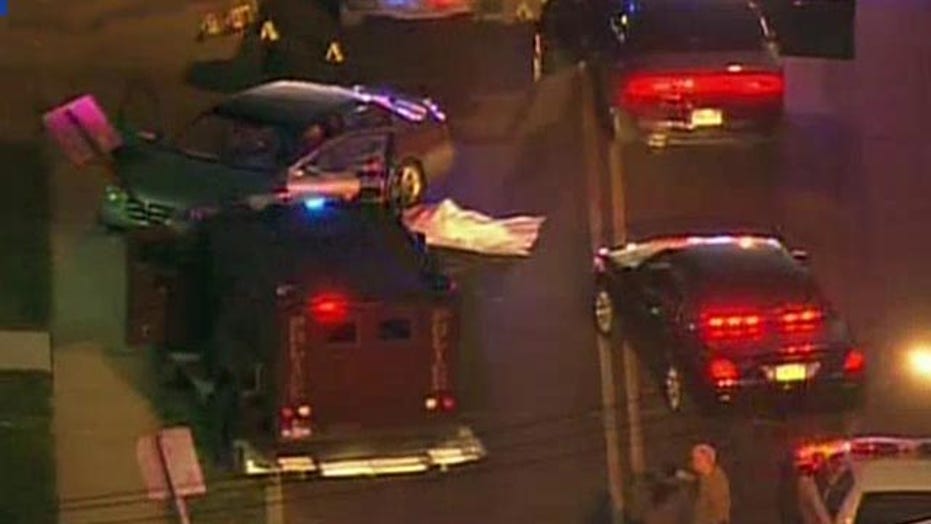 Police in suburban Philadelphia said late Tuesday that they had shot and killed a man who attempted to run down officers in his car after they tried to arrest him for making threats against law enforcement.

WTXF reported that police had identified the man as Joseph Pacini, 52, of Clifton Heights, Pa. Authorities said that Pacini had posted a video on social media threatening to kill police and FBI agents. The station reported that police had obtained an arrest warrant in relation to the threats and SWAT teams were en route to Pacini's apartment to serve it when he left in his car at around 4 p.m. local time.

Upper Darby Police Superintendent Michael Chitwood said that officers stopped Pacini at an intersection in the town and ordered him out of his car. Instead of complying, Pacini backed into the Clifton Heights police chief's car and then prepared to run over other officers.

Chitwood said the officers feared Pacini would kill them and they "did what they had to do." He said five officers fired at the man and no officers were injured. Pacini did not fire at police, and Chitwood said he did not know if the man had a weapon. The officers involved in the shooting are being interviewed by the local District Attorney's office and the incident is still under investigation.

WTXF reported that police believe Pacini suffered from and undisclosed mental illness, and he had been arrested twice before Tuesday. One of the previous arrests came back in 2005 Pacini was arrested and charged with recklessly endangering another person, false imprisonment, and terroristic threats.

Pacini's death comes a little more than a week after a man who made similar threats shot two New York Police Department officers dead in their patrol car and then killed himself in a subway station. Officers Rafael Ramos and Wenjian Liu were ambushed on a Brooklyn street as they said in their marked car on Dec. 20. Their attacker, Ismaaiyl Brinsley, had referenced in online posts the high-profile killings by white police officers of unarmed black men, specifically Michael Ferguson in Ferguson, Missouri, and Eric Garner on Staten Island. Soon after the officers' shooting Brinsley, who was black, killed himself.

On Sunday night, two men opened fire on a police car patrolling a tough part of Los Angeles, but the two officers inside were not injured and one was able to shoot back, authorities said. One suspect was later arrested, and the other was on the loose. Police haven't determined a motive for the shooting in South Los Angeles, an area plagued by gang violence, but said there were no indications it was linked to other attacks on police.