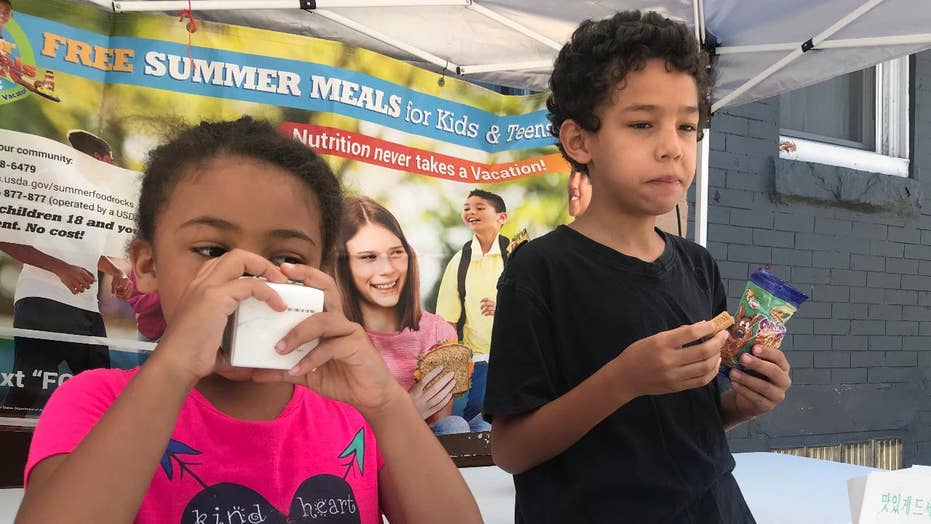 Every weekday, Nilsa Adorno sets up two plastic tables under a white tent outside of her home. She stacks boxes of prepared lunches to prepare for the afternoon rush. When noon arrives, a clatter of flip-flops can be heard and children rush to form a single line.

For 12 weeks during the summer, Adorno distributes free lunches and snacks to 45 neighborhood children, ranging in age from 1 to 16.

“Their families rely on school lunches so in the summertime they struggle, and can’t always afford to feed them,” said Adorno.

Supported by the Archdiocese of Philadelphia, Adorno, a mother of seven, is an unpaid “do-gooder” who partnered with the church last year to serve as a block leader for its summer meals program.

Food insecurity, which is the lack of reliable access to affordable, nutritious food, is prevalent in Philadelphia. According to the Archdiocese’s Nutritional Development Services, 22 percent of Philadelphians don’t know when their next meal is. And for school children, the hot summer months can prove to be the hungriest time of year.

Brooke Mullen, community director at the archdiocese’s Nutritional Development Services (NDS), said the program began nearly 45 years ago as a hot soup handout. But it’s grown since then, she said, and now delivers roughly 800,000 meals. There are about 20 feeding sites like Adorno’s, Mullen said.

“Our sites range from YMCA’s, police stations, and schools, but block leaders like Nilsa, who set up a table in their community, help us reach a group who may otherwise go unserved,” Mullen said.

Nutritional Development Services partners with approximately 450- 500 sites in Philadelphia and the five surrounding counties. Eligibility for the Summer Meals program is based on area eligibility and is not child-specific. A site is eligible to participate and receive meals at no cost as long as the closest public school serves at least 50% of their students a free or reduced-price meal during the school year. (Fox News)

The meals dropped off every morning are served cold and ready to eat.

“They have good food I get to try new stuff,” said Annabel Salvador, 12, who lives down the street and attends the lunch program daily with her younger sisters. “I really like the snacks though they are name brand [items] like the ones you see in the grocery store.”

Students are often served sandwiches, low-fat chocolate milk, veggies, a snack, and a juice box, followed by a snack hour later in the afternoon.

All meals are delivered daily “ready to eat” and no preparation is required. Sites are required to serve approximately 25 children each day and complete daily paperwork to be submitted to NDS on a weekly basis. (Fox News)

Adorno, a self-proclaimed big kid, connects with the children through water balloon fights and block races. And she earned the respect of the Fifth Street moms and dads.

“I know what is like [to struggle]. I can no longer work due to my youngest son’s disability,” Adorno said. “Starting this program has helped me as much as it helps them, serving the kids makes me a more patient mom and a better person.”

Many of the children who frequent the lunch hour do not attend summer camp or go on family vacations. So Adorno makes the most of their time by setting up activities for the children after their 3 p.m. lunch hour.

“My core group of kids hangs around after lunch, so I began asking their parents if it was OK to set up a mini-camp for them,” said Adorno, “They agreed, and on the first day of summer I had each kid write down an activity that they would like to do and now I surprise them with something new to do every day.”

“It’s hot and nobody wants to be stuck in the house so we come here to play games and talk with the other kids,” she said.

While Adorno does not discuss hunger with the kids, she sees a difference in their energy levels after they eat.

Adorno said many are comforted knowing she won’t ask prying questions but will provide a game, a smile and, most importantly, a meal.